A family-owned manufacturer and provider of oil and gas infrastructure, its business now includes midstream LPG and NGL terminals. The company has been busy lately, designing and building the propane terminal that Crestwood Services, a unit of Crestwood Equity Partners LP, brought online in 2017 to serve markets throughout the Northeast, including New York and New England.

Higher standards
From its Columbia Station headquarters in northern Ohio near Cleveland and Lake Erie, the company serves midstream customers nationwide and globally. It prides itself on customization, superior craftsmanship, high-quality materials and responsive project management, no matter the job scope.

Derek Rimko, vice president of operations, told Midstream Business that Superior gains distance from competitors by consistently exceeding customer goals and expectations, with projects completed on time and on budget. He added that the company’s emphasis on safety, including codes and standards expertise and complete training programs for its midstream and propane autogas sectors, also sets it apart. 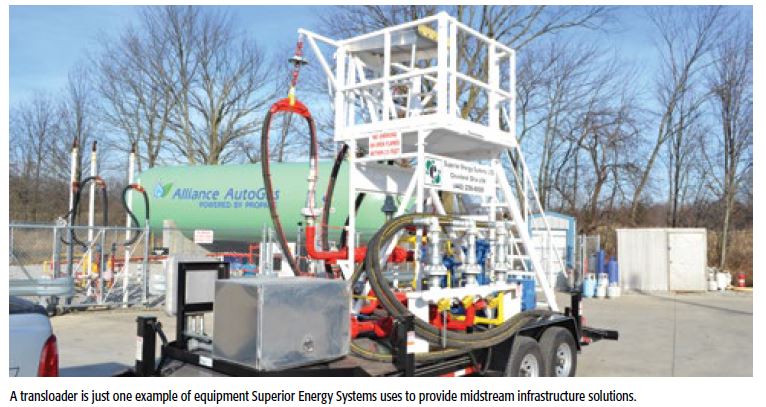 Training programs are key
Mike Walters, vice president of safety and training, said that while most of Superior’s training programs “are for in-house use, making sure our employees are extremely prepared and enabled from a safety and technical standpoint,” there are industry-driven programs offered to “any company that does not wish to conduct their own.” The company offers these through participation in planning and execution committees, and with the help of two registered proctors and skill assessors, he told Midstream Business.
Safety and regulatory programs include:

The company’s safety and training programs have evolved , he said, as “the requirements of OSHA, the U.S. Department of Transportation, the National Fire Protection Association NFPA 58 [the industry standard for LPG storage and handling] and others continue to change and become more extensive.”

Superior is certified by the National Propane Gas Association Certified Employee Training Program, resulting in all employees being “rigorously trained on all aspects of the propane industry, including the installation techniques, equipment and behavior of the gas itself.”

More training is done on the autogas side of the business, Walters said. Autogas refers to propane used as fuel for fleet vehicles.

“That customer base is less aware of the product specifications, technical aspects and general operation,” he said. “This training is not necessarily written programs, but face-to-face interaction and startup of autogas stations. The reasoning for this is due to the greater number of products sold vs. the midstream market. In other words, we sell hundreds of dispensers a year vs. a handful of terminals.”

The company participates in several national and state trade shows. These include the annual National Propane Gas Association Convention and International Expo and the GPA Midstream show. Superior’s executive team serves on numerous industry organizations, including marketing and outreach, code, safety and training and legislative committees.

In from the cold
According to the U.S. Energy Information Administration’s (EIA) “Winter Fuels Outlook” report from October 2017, households heating with natural gas were pegged to spend $69 more compared with the winter of 2016, due to a forecast 9% increase in consumption and 2% increase in price.

Superior builds terminals for the midstream and retail markets. Propane prices were forecast to be higher in winter 2017 than in the previous year, the EIA said. Company CEO Don Fernald noted that Superior often receives “additional opportunities for midstream work” during and after cold winters that feature higher-priced propane, more gallons of it sold and greater supply issues. However, that is not the only factor influencing those projects and opportunities, he noted.

Boosted activity from all of the U.S. shale plays, including the Marcellus, has increased and augmented the company’s midstream business, Fernald told the magazine. Though competitors handle similar work, Superior “is in the unique position to handle [entire projects] start to finish, from engineering and planning to construction and installation, as well as follow-on service and maintenance,” he said.

Terminals themselves “incorporate a multitude of details and take more time and resources to complete, but the payoff is obviously higher,” he said.

In the case of Crestwood, that company’s vice president of supply and logistics development, Andy Ronald, praised Superior. “This is the fourth terminal we have constructed with Superior, and we couldn’t be happier with their efforts,” Ronald said in a2017 statement. “Their hyperfocus on engineering quality and design, as well as exceptional customer service, sets them apart. When it comes to terminal construction, they have the ability to do it all seamlessly.”

Crestwood
Crestwood was a repeat customer for Superior, which began providing leading-edge-designed terminals for fuels after shifting its business focus in the early 2000s. Recently Superior saw the close of a busy 2017 and looks forward to a market that is not slowing down. 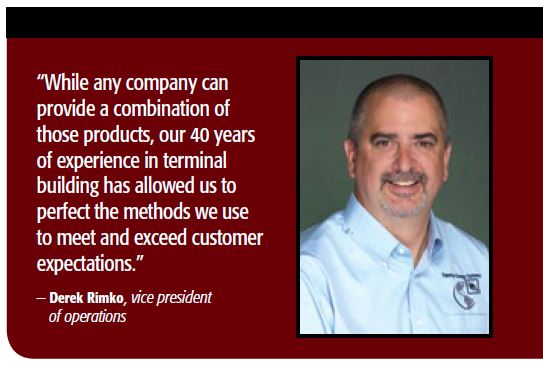 In the case of the Crestwood terminal in Montgomery, N.Y., which can store more than 280,000 gallons of propane, “there was a clear need for additional propane resources in the Northeast, specifically in New York and the New England states, and the harsh winter of 2014 helped prove that. The terminal is conveniently located right off of Interstate 84 and provides reliable supply to thousands in the area,” Rimko said.

Superior provided all equipment for the terminal, which contains 16 rail offloading stations on a continuous platform, operating two switches per day. This will ensure a capacity of about 100 trucks per day, or a volume of 1 million gallons. The four-spot truck rack with turbine pumps will load four trucks in 17 minutes, reducing wait times during peak winter months.

The Montgomery terminal allowed Superior to showcase how a company can reach maximum rail offloading and truck loading capabilities with the correct pumps, compressors, storage, unloading stations and loading racks in place.

“While any company can provide a combination of those products, our 40 years of experience in terminal building has allowed us to perfect the methods we use to meet and exceed customer expectations,” Rimko said. “We are proud of every midstream terminal we’ve built, but we have learned to push the limits on the mechanical and engineering capabilities of a terminal, and it has paid off for us as well as our customers.” 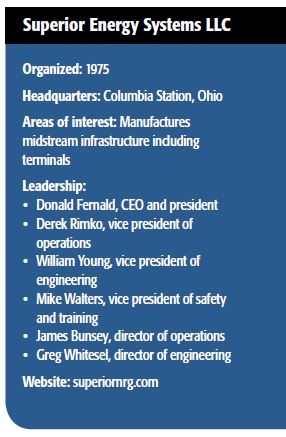 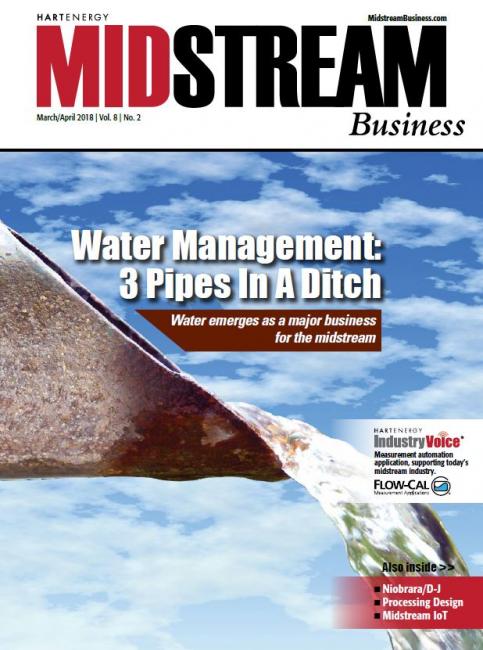