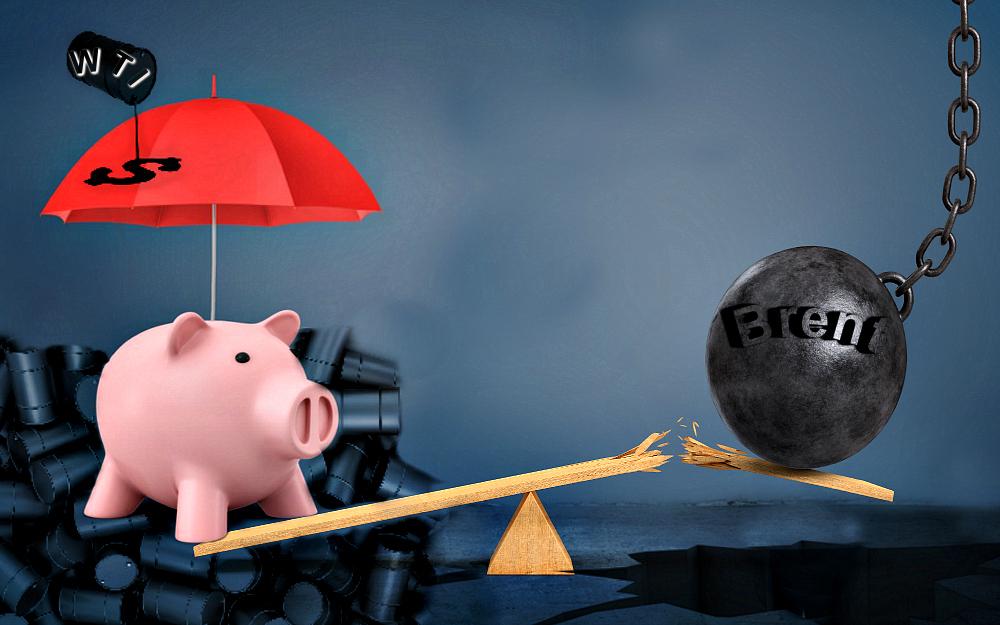 Brent crude has opened up a price advantage as high as $8 per barrel with WTI weighed down by infrastructure jams, high export costs and the aftermath of Hurricane Harvey. (Source: Hart Energy)

The U.S. oil industry rightly looks enviously at Brent crude prices, which have been selling at a premium as high as 16%—$8.18—more than a barrel of West Texas Intermediate (WTI) since August.

The Brent-WTI spread—which widened to $8.18 on Sept. 26 and averaged nearly $6 per barrel (bbl) in October—follows the aftermath of Hurricane Harvey, which bottled up production in Cushing, Okla.

The larger price disconnects are rooted in several challenges for U.S. E&Ps. But two factors loom larger than others and will keep WTI depressed through at least first-quarter 2018: transportation constraints and export add-on fees.

“The WTI price spread with Brent reflects the transportation costs associated with bringing crude oil from Cushing to the U.S. Gulf Coast and with exporting crude oil to Asia, the marginal market in which Brent and WTI crude oils compete,” the U.S. Energy Information Administration (EIA) said in a Nov. 8 report. 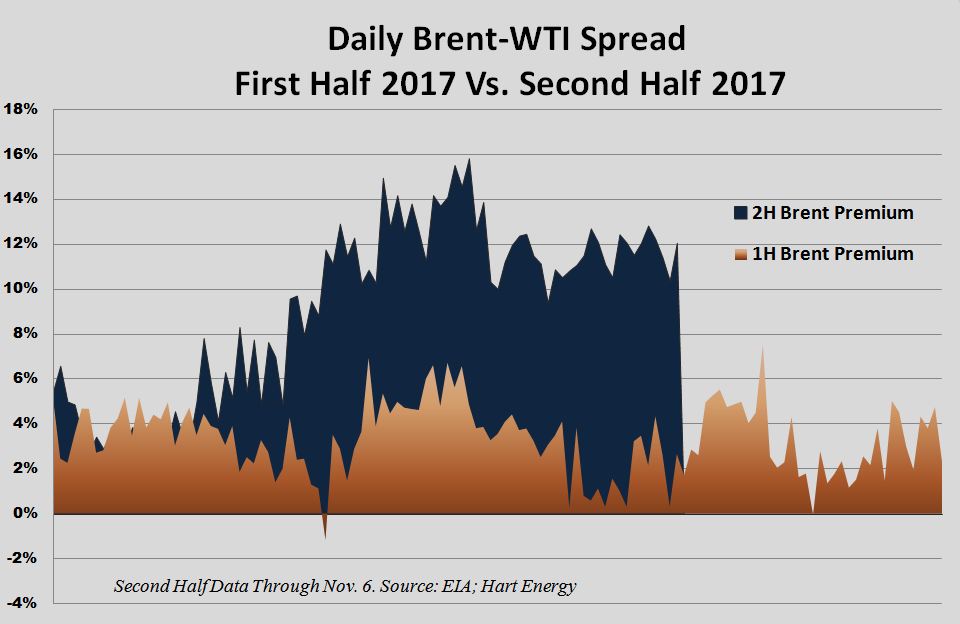 U.S. crude oil production, particularly in the Permian Basin, has shot up, requiring more transportation bandwidth to accommodate it. Matching pipeline capacity doesn’t always match up as rapidly as E&Ps need. The result, according to EIA estimates, is that moving oil from Cushing to the Gulf Coast—already costing roughly $3.50/bbl—has grown more expensive as transportation constraints have grown.

Jenkins said that while current $7 spreads are too high, Raymond James' initial differential forecast of $3/bbl was probably too low. The updated estimate is a spread of about $5/bbl. Jenkins tallied the costs associated with moving, storing, loading and shipping WTI, raising his prior cost forecasts by $2/bbl.

Transportation woes have caused price inflation when moving domestically produced crude oil from Cushing and from the Permian Basin in Texas to the U.S. Gulf Coast, the EIA said. Near-term changes in the price spread generally come from pipeline capacity expansions and increasing U.S. crude oil production “moving in and out of balance,” the EIA said.

While total commercial U.S. crude oil inventories have declined by 25 MMbbl since the last week of July, inventories in Cushing have bulged by 8.8 MMbbl. Since Hurricane Harvey, inventory builds at Cushing have pushed up 51% greater than the five-year average.

However, pipeline capacity expansions due to come online by mid-2018 are likely to help with crude traffic jams—adding up to 765,000 bbl/d by the second quarter, Jenkins said.

High Cushing inventories should also begin to subside as Midwest refiners wrap up maintenance season and restore up to 600,000 bbl/d of demand to the region, including draws from Cushing. 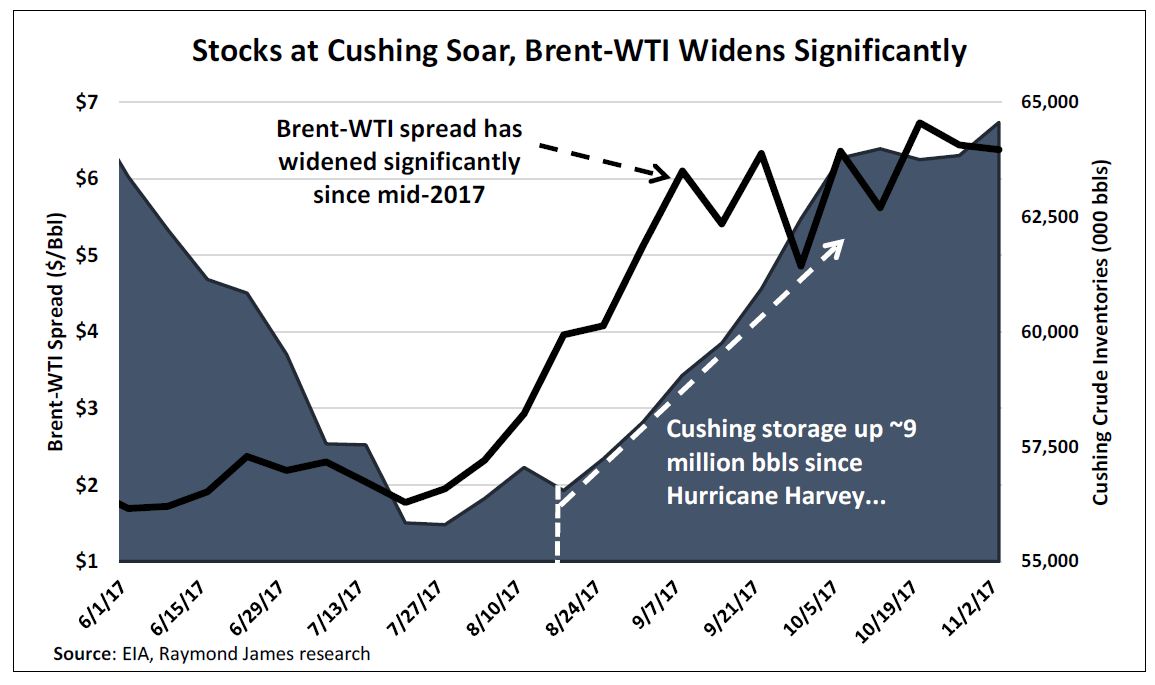 Nevertheless, disconnects between crudes likely won’t return to the blowout days of years past. For the years 2012 and 2013, the differential between Brent and WTI averaged $14/bbl, according to a Hart Energy analysis of EIA data. At the end of 2012, for instance, Brent overpowered WTI by at least $20 for 57 days.

In February 2017, WTI spot prices actually eclipsed Brent by $0.64/bbl, according to EIA data. But the landfall in August of Hurricane Harvey disrupted ports, ship and infrastructure, causing an “abnormal build of Cushing inventories,” Jenkins said.

Along with pipeline-to-tanker bottlenecks for exports, some crude quality questions have put WTI at a disadvantage. Jenkins also noted that refiners tend to prefer Brent quality to WTI because of production needs. WTI is blended with heavier crudes to meet quality specifications and refiners have “long complained of inconsistent WTI barrels,” he said.

But Brent’s success due to overstocked U.S. inventory is also a measure of market demand, which is up internationally.

U.S. E&Ps have responded with an acceleration of crude exports. In the first eight months of 2017, E&Ps exported about 900,000 bbl/d, Jenkins said. Since Hurricane Harvey, exports have reached 1.5 MMbbl/d and gone as high as 2 MMbbl/d in two of the past four weeks.

Once exported, WTI competes with Brent directly in the global market. U.S. crude oil export data suggest that the marginal competitive market for WTI and Brent is in Asia. So far in 2017, China is the second-largest destination for U.S. crude oil exports at 173,000 bbl/d, the EIA said.

“To compete with Brent in Asia, WTI prices must reflect the additional transportation costs U.S. crude oil exports incur,” the EIA report said. “Although more infrastructure to export crude oil has been built recently, U.S. exporters must still use smaller, less-economic vessels or complex shipping arrangements, which add to costs.”

U.S. export capacity is likely to be capped at slightly more than 3 MMbbl/d, though capacity should grow by 500,000 bbl/d to 1 MMbbl/d in the coming years, Jenkins said. 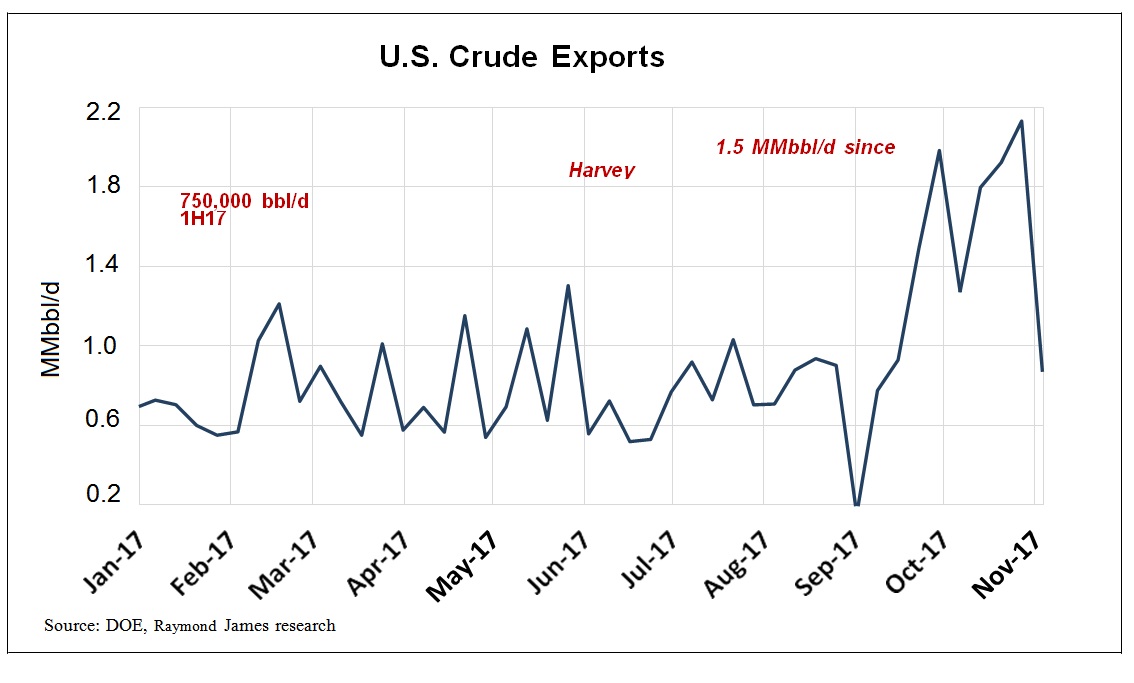 The Brent-WTI spread isn’t bad news for the entire industry. Independent refiners and midstream companies benefit to varying degrees either because of lower prices or the need for additional infrastructure. E&Ps, whoever, see a modest headwind. But even with WTI’s weakness, tightening oil markets mean a “major cash flow uplift overall,” Jenkins said.

Several companies also have exposure to Light Louisiana Sweet (LLS) prices, which has stayed closer to Brent prices than Cushing or the Permian.

“While a wider price differential may be a perceived negative for U.S. oil markets—we’d also suggest that if temporary disruptions to the market can compound into both a wider spread and higher oil prices,” he said, “the global oil market is much more undersupplied than most energy investors will admit.”

Darren Barbee can be reached at dbarbee@hartenergy.com

Work on the tankers could potentially violate sanctions on Venezuela, lawyers say.