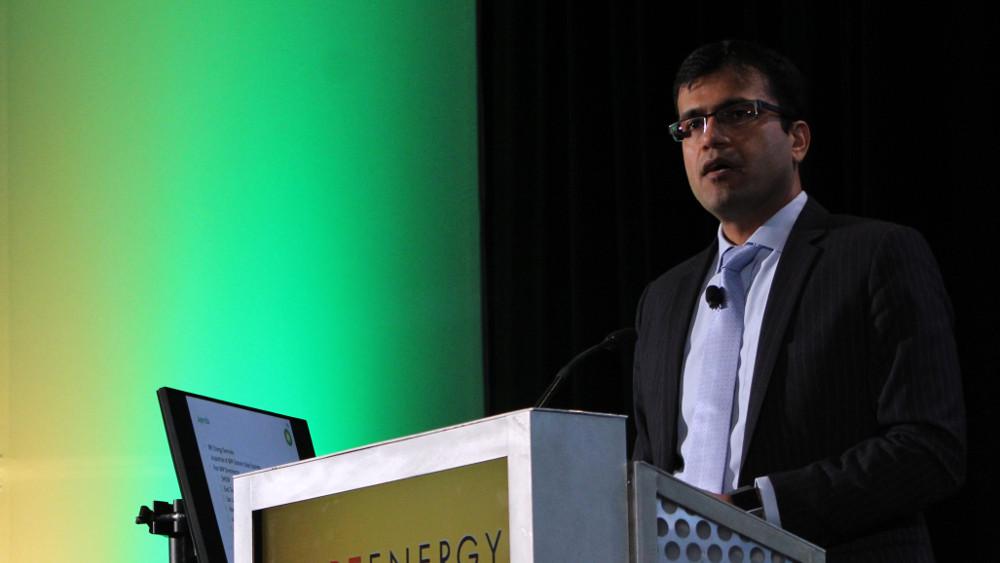 Mohit Singh, senior vice president of business development and exploration for BPX Energy, says the company is on its way to building a premiere onshore business in the U.S. (Source: Velda Addison/Hart Energy)

That changed when Mohit Singh, senior vice president of business development and exploration for BPX Energy, took the stage at Hart Energy’s DUG Haynesville Conference & Exhibition on Feb. 20. He spoke about how BP is transforming its U.S. onshore business, following its $10.5 billion acquisition of BHP Billiton’s Delaware Basin, Eagle Ford and Haynesville assets in 2018.

“For me to come out [on stage] was a little bit of a coming out party in some sense,” Singh said. “One of the things we want to do going forward is be a little bit more visible externally so we can get our message out.”

Starting March 1, the company will take over operations from BHP on its quest to build a “premier independent onshore company focused on delivering free cash flow on a consistent basis,” Singh said.

The acquisition, which closed in October 2018, marked a pivotal moment for BP, which already had U.S. onshore assets that include the Midcontinent’s SWOOP, Anadarko and Arkoma as well as East Texas, San Juan and Wamsutter assets. The assets are among the $5 million to $6 million worth of property BP plans to divest over the next two years to pay for its acquisition of BHP’s U.S. shale assets.

Referring to BPX’s legacy portfolio, Singh said the company had several good opportunities prior to the acquisition, “but BHP clearly upgrades us. … We’re talking about decades and decades of high quality drilling inventory that will deliver phenomenal rates of return.”

The deal includes assets in the Permian’s Delaware Basin, adding about 41,000 barrels of oil equivalent per day (boe/d) in production with 3,390 gross drilling locations on an 83,000-acre position.

“We are seeing up to 240 rig years of drilling inventory just because of the stacked pay zones,” Singh said, particularly in the Bone Springs and Wolfcamp A, B and C/D. The company put the after-tax internal rate of returns for the assets at between 28% and 50%.

The deal also gives BPX an opportunity to develop multilaterals in Eagle Ford benches and Austin Chalk. The acquired assets in the liquids-rich Eagle Ford included core acreage in the Karnes Trough and the shale play’s wet gas window, Singh said. Current production is about 87,000 boe/d (71% liquids), and there are 1,402 gross drilling locations on the 201,000-acre position.

In the Haynesville, BPX tripled its footprint and doubled its production with the BHP deal. Singh said BPX is running six rigs in the Haynesville in East Texas this year and has plans to eventually start on the Louisiana side.

Once BP completes divestitures, which are being offered in seven packages, Singh said BPX will only operate in the Delaware, Eagle Ford and Haynesville.

“That’s where all of the capital will go. Traditionally, we’ve spent about $1 billion of capital in this business every year,” Singh said. “Going forward, that number will be $2-$2.5 billion. It’s significant investment by BP into the onshore business.”

Meanwhile, marketing has already begun for assets being sold by BP.

“Suffice it to say the last 18 months at BP have been very, very hectic but a good kind of hectic,” Singh said.

The Shallow Woodford Oklahoma Oil Play (SWOOP) near the Scoop and Stack plays and East Texas packages are already being marketed. The others, Singh said, are set to come out between the end of February and early March.

The biggest of the bunch are the San Juan Basin assets, which accounts for half of the nearly 200,000 boe/d of production being sold. Singh described San Juan as a “phenomenally robust play in terms of coal.” Most of the production comes from coal seams in San Juan, he said, calling it world-class quality coal.

Here, BPX has drilled horizontal semi-laterals, dual laterals, tri laterals and quad laterals, which Singh described as horizontals coming from one vertical on a pad. Such drilling methods have enabled BPX to reduce well costs, he added. Plus, “given the quality of the coal is so prolific, these wells come on and they stay flat for a year plus, which is incredible.”

However, some oily acreage is also available, including in the SWOOP where BPX said well results have been strong.

“We were running four rigs prior to BHP happening. We were very, very bullish on this play,” Singh said before highlighting IPs of nearly 90% oil. “Hopefully, it will end in the hands of someone who’s going to get after it.”

Other assets available include the:

·         Glenwood, Woodlawn and Oak Hill fields in East Texas, which comprise about 45,000 mostly contiguous acres. BPX says there are development and recompletion opportunities in the Cotton Valley, Haynesville and other horizons;

·        Two large core gas positions in the Arkoma, where there is undeveloped horizontal potential in the Woodford Shale; and

The acquisition of BHP’s U.S. shale assets has been transformational, Singh said.

“It’s given us very high rates of return and a depth of repeatable drilling inventory that is very, very exciting. … We are well on our way to building a premiere onshore business,” he said.