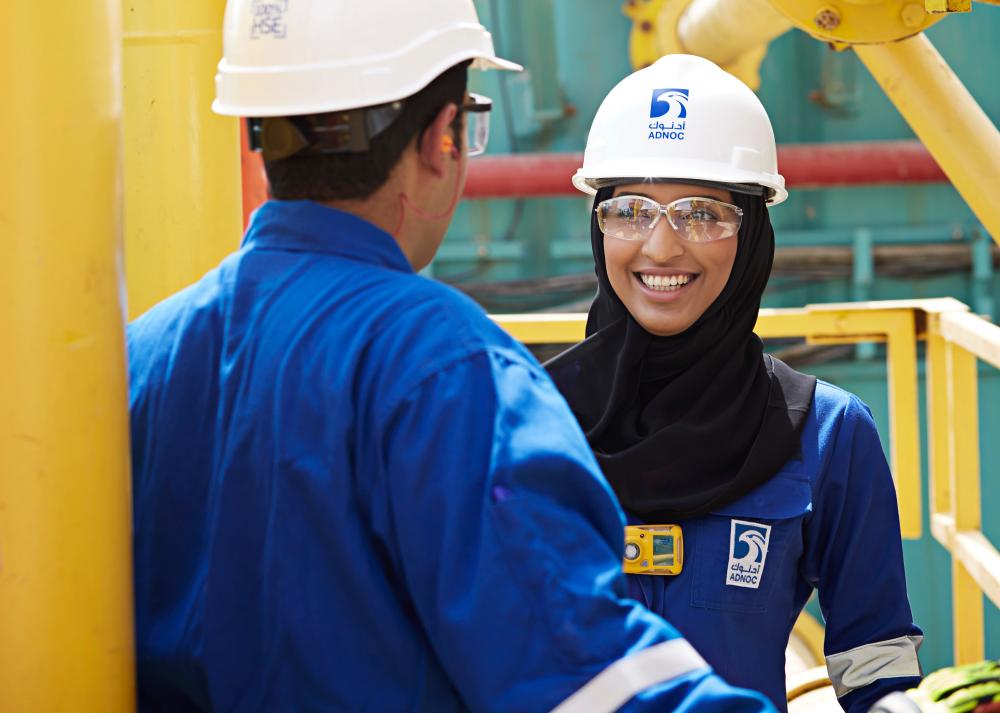 An ADNOC survey revealed that the future workforce shows disinterest in the oil and gas industry because they believe the industry is not technologically driven. (Source: ADNOC)

During the 2017 Super Bowl, the American Petroleum Institute (API) launched an ad to woo the millennials—who constitute the largest part of the U.S. workforce—to work for the energy industry.

“This ain’t your daddy’s oil,” said the ad, through which the API wanted to educate viewers that oil and gas isn’t just about the fuel that is pumped out at gas stations, but is used to make a variety of products such as cars, paint, life-saving medical devices and makeup. This was one of several attempts by the energy industry to attract the future workforce, which views the industry’s careers as “unstable, blue-collar, difficult, dangerous and harmful to society,” according to a survey by EY.

To understand the perception of the future workforce toward the oil and gas industry, Abu Dhabi National Oil Co. (ADNOC) commissioned a survey called “Oil and Gas 4.0: Attracting the Workforce of the Future,” which polled 3,000 students and young professionals across 10 countries representing a mix of major global economies. The survey was conducted to examine future workforce and employment trends in the oil and gas industry in line with ADNOC’s “Oil and Gas 4.0” mission, which aims to provide energy needs for the fourth industrial revolution by embracing digital transformation and optimizing resources, including its workforce.

According to the study, only 44% of STEM millennials and Generation Z (Gen Z) are interested in pursuing a career in oil and gas, which is sparse compared to the 77% interested in working in technology-driven sectors. Other leading industries competing to attract the future workforce are life sciences, opted by 58%, closely followed by health care, which was picked as a future career by 57% of survey participants (Figure 1).

“The STEM millennial and Gen Z talent of today will be the leaders of tomorrow—and we need those leaders to be the best,” said Sultan Al Jaber, ADNOC CEO and Minister of State in a press release. “There is much we must do to broadcast the exciting changes taking place in our industry and to demonstrate to the science and technology graduates and young professionals that the oil and gas industry is an industry of the future that offers truly rewarding careers.” 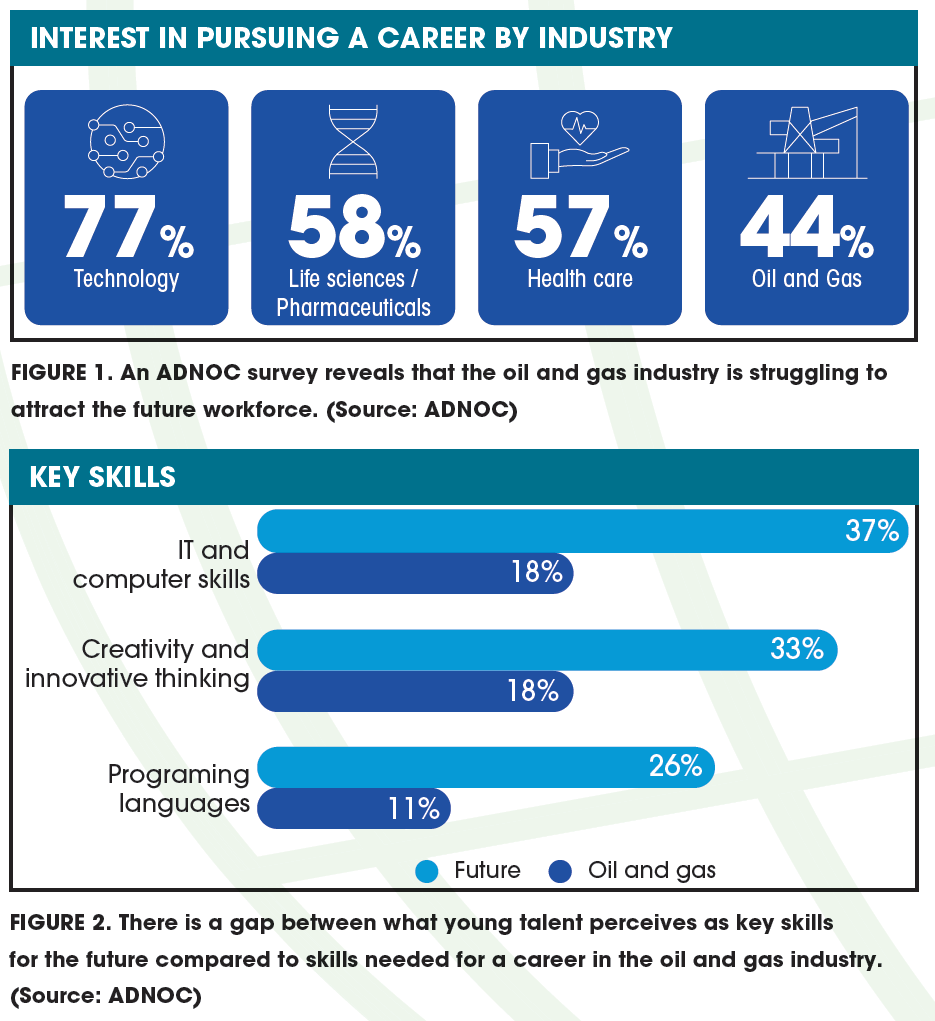 Perception gap
According to the survey, one of the major reasons for disinterest in the oil and gas industry among future employees is their perception that the sector is not technology-driven. Although students and young professionals are drawn toward sectors in which technology plays an important role, they don’t favor a career path in the oil and gas sector.

The survey findings also show a mismatch between their perception of the most important key skills needed for the future compared to those needed for a career in the oil and gas industry. While 72% of the future workforce believes that new technologies can empower the energy industry, they don’t perceive technical and creative skills as job requirements for this sector. As opposed to the 37% of students and young professionals who see IT and computer knowledge as fundamental skills for the future, only 18% view them as requirements for the oil and gas industry (Figure 2).

“For millennials and Gen Z, the oil and gas sector is only about rig producing oil,” said Tasnim Al Mzaini, head of integrated production planning of digital unit at ADNOC. “It’s extremely important to address the perception gap because the more STEM millennials and Gen Zs associate the energy industry with new technologies, the more interested they will be in pursuing a career in this field. For instance, even though programming language is a unique skill set used in our industry that allows us to optimize cost and generate higher revenues, the survey shows only 11% of the future workforce perceives its importance as a skill needed in the industry.”

“Oil and gas has always been and will continue to be an industry of the future that is at the forefront of technology and innovation,” Al Jaber said. “It is an exciting time for STEM talent to join the  industry, particularly as we embrace new technologies and partnerships for digital and technological transformation across our operations.”

The ADNOC-commissioned survey also reveals that the interest in the oil and gas industry varies significantly by geography and is higher in emerging and hydrocarbon-focused economies. Of those who expressed interest in working for this sector, 79% belonged to oil-rich Saudi Arabia, which ranks highest among the countries included in the survey. The future workforce of hydrocarbon-focused and emerging economies, such as China, India, United Arab Emirates (UAE) and Russia, expressed higher interest in working for the oil and gas sector compared to millennials and Gen Z in industrialized economies, such as the U.S., Canada, Japan and France.

Next steps
The survey findings show a compelling need for the industry to take concrete steps in promoting its technological depth and digital innovations to young students and professionals. According to Al Jaber, “If we are seen as low tech and old fashioned, we must showcase our high-tech breakthroughs and our cutting-edge practices. When we are perceived as environmentally unfriendly, we need to highlight the work we are doing to protect and safeguard our natural world.”

“I do not foresee a major challenge, but we should exert more efforts in increasing awareness of our industry’s technological advancements among the future workforce,” Al Mzaini added. She believes that the solution lies in addressing the perception gap of future employees because they do not understand to what extent the industry is using digital technologies.

“We at ADNOC are trying to fulfill our responsibility to mitigate perception gaps of the future workforce and clear their misunderstandings regarding the industry,” Al Mzaini said.

She added that ADNOC has entered into several agreements with academic institutions, technology companies and local communities such as the UAE Coder Program, which supports the development of IT skills among the country’s youth. ADNOC also sponsors young students to obtain engineering degrees from prestigious universities worldwide.