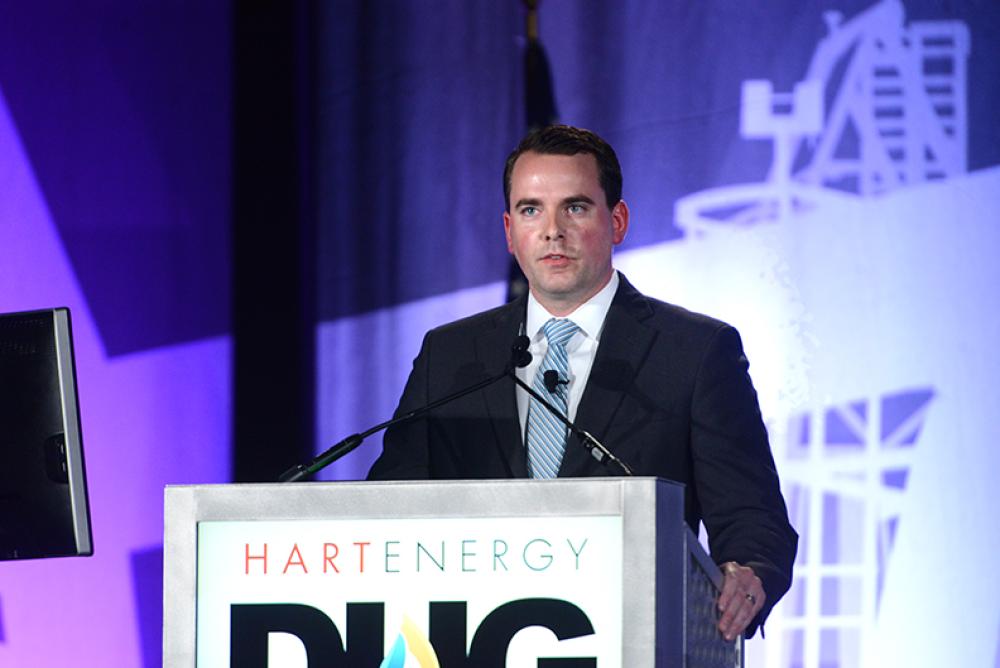 But the oil and gas are still there below ground.

The Arkoma Basin may not have been receiving the recent publicity that the Sooner State’s Stack and Scoop enjoy but that is changing due to the its excellent prospects, according to Nathaniel Harding, founder and president of Antioch Energy LLC, who spoke at Hart Energy’s DUG Midcontinent Conference and Exhibition.

“The play is first class, it is equivalent to the Stack and Scoop,” Harding said.

He referred to the “Arkoma Stack” in his presentation to emphasize the similarities between the two regions. Both offer multiplay/multipay opportunities, he said. The Arkoma Stack has up to five unique, high-quality reservoirs, including two Woodford and one Caney benches that are proved economic, with the Mayes in early economic appraisal.

The Woodford and Caney are both prolific, resource-rock plays with production driven by matrix porosity. The area offers producers excellent commodity optionality.

“There is ample takeaway and processing capacity and that means low differentials,” Harding said.

The play enjoys good infrastructure since the region has had production since the first days of Oklahoma’s early 20th Century oil boom. Harding noted the Arkoma has produced more than 1 Bboe since its discovery more than 100 years ago.

The industry has begun to take notice. To date in 2017, Hughes County has been the most actively leased county in Oklahoma with multiple, private-equity backed entrants. More than 100 wells have been proposed, spaced, pooled permitted, drilled, completed and are flowing back, Harding said. That represents a roughly $4 billion investment by the upstream and midstream sectors.

On the midstream side, Tall Oak Midstream announced earlier in September plans to enter the Arkoma—which it calls the “East Stack”—citing “multiple stacked pay zones,” the Antioch president noted. The system will serve Hughes County and portions of nearby Seminole, Pontotoc, Coal, Pittsburg, Atoka and McIntosh counties with 50 miles of pipeline, a 5,000 bbl/d stabilizer and condensate storage.

Oklahoma City-based Antioch positioned itself well in the Arkoma before the industry’s attention swung to the area. Harding described Antioch’s current Hughes County holdings as some 23,000 net acres, of which 65% is operated. Some 40% is held by production, which will rise to 65% by first-quarter 2018. The firm currently has one rig running on its Arkoma acreage.

“We are located in the sweet spot as we define it. Our acquisition effort has targeted the best-quality reservoirs. Recent Arkoma wells with improved completions outperform Stack wells,” he said.

Antioch has enjoyed strong returns at current costs and sales prices because the region offers “excellent deliverability and predictable results.” Wells are up to 50% liquids with great differentials. “Costs are going even lower as operators accelerate learning,” Harding said.

The firm’s proved reserves are more than 180 Bcfe with a resource potential of approximately 2 Tcfe on its current position, he added. To better define the region’s potential, Antioch commissioned a study by NUTECH Energy Alliance Ltd. that will be finished soon, Harding said.

He noted the firm has “a deep bench of talent” on its staff that has been active in the Midcontinent, and knows it well, for many years. The firm has been selling legacy assets in the Anadarko Basin of western Oklahoma so it can focus on the Arkoma, Harding said.

Australia's Woodside Steps Up Spending For Next Leg Of Growth

Australia's Woodside Petroleum Ltd on Jan. 17 flagged higher-than-expected investment spending for 2019 as it steps up early work on the two big natural gas developments that will drive its growth in the next decade.