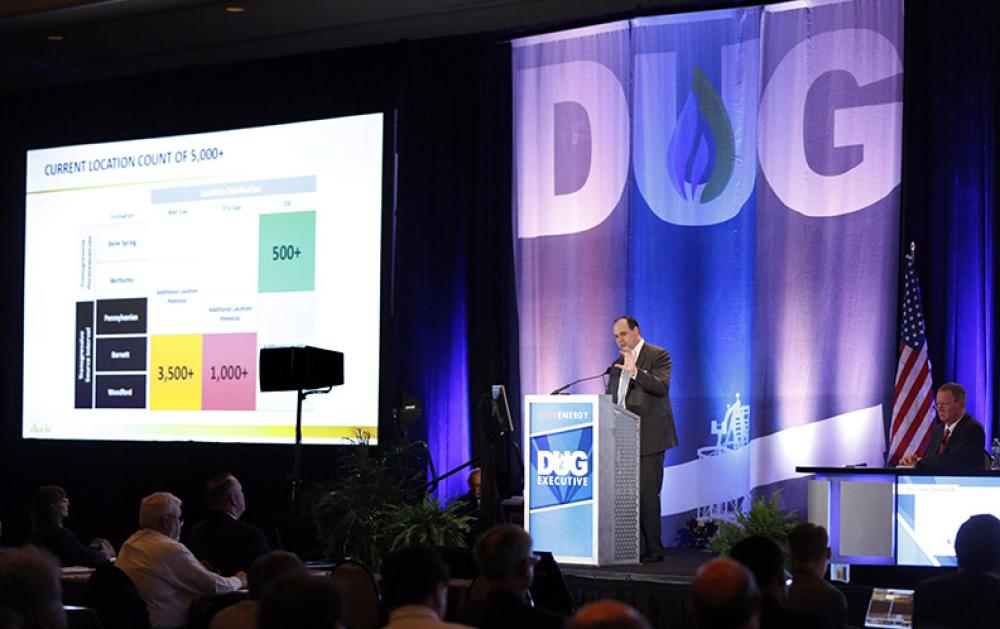 HOUSTON—John Christmann, president and CEO of Apache Corp. (NYSE: APA), left little doubt about where his company’s focus is these days—the Permian Basin. While he espoused the potential of international plays in the North Sea, Egypt and Suriname, he told an audience of top-level oil and gas executives at the inaugural DUG Executive conference that “the Permian is attracting the majority of our capital investment.”

In case you missed it, Houston-based Apache revealed the Delaware Basin discovery in September 2016. It is the same geological age as the Arkoma Woodford and Scoop/Stack. And, it’s full of wet gas and oil potential.

“We are incredibly excited about the Alpine High play and its large inventory of repeatable, high-value drilling opportunities,” Christmann said at the time. A year-and-a-half later he was no less excited about the progress the company has made in the play.

The play is vertically stacked oil as well as wet and dry gas, Christmann said. The company holds about 340,000 contiguous acres that it owns without any partners “for the most part,” he added. Apache has also identified more than 5,000 locations as of today.

He touted the company’s “tremendous economies of scale” in the play. “It’s going to let us do some things with gas and midstream infrastructure that are going to be differential,” he added.

Christmann told the audience that Apache is strategically positioned over the next few years to deliver large quantities of gas and NGL to the Gulf Coast.

He also said they’ve been checking off planned milestones in the development of the play “very nicely.” He acknowledged a few hiccups caused by Hurricane Harvey in terms of building out central processing facilities.

Christmann told the audience what makes Alpine high truly unique is its 1,600 feet of true source rock. “The difference is this was laid out in a very quiet, tranquil marine environment. Sea level didn’t move much. It was just gradually rising and falling. It sets up an environment where you can do large-scale deposition that’s pretty uniform,” he said.

One of the keys for the whole basin, Christmann said, is moving the midstream along. And Apache has been doing just that.

Construction of the midstream component started in November 2016. Christmann said Apache invested about $700 million building it through year-end 2017.

“We are working through lots of various options in terms of how we fund this off our balance sheet,” Christmann said.

Through year-end 2017, Apache has five central processing facilities in place.

Outside of Alpine High, Christmann said the company has committed to financial discipline. “Through the heart of the downturn we were able to protect our credit rating, so that’s something we are very proud of,” he said.

With the company shift in focus to the Permian Basin, the North Sea and Egypt, Apache exited Australia, Canada and the LNG market.

Christmann spoke briefly about the potential the company sees in Suriname. “We have a big position in Suriname that we will be exploring in the coming years,” he said.

But the main focus remains on the Permian. The basin represented about 11% of the Apache’s investment in 2011. Today, it represents about 70%.

“[The Permian] will drive profitable growth for many, many years to come,” he said. “We’re running a balanced program between both the Alpine High and our other Permian assets in the Midland and Delaware basins.”