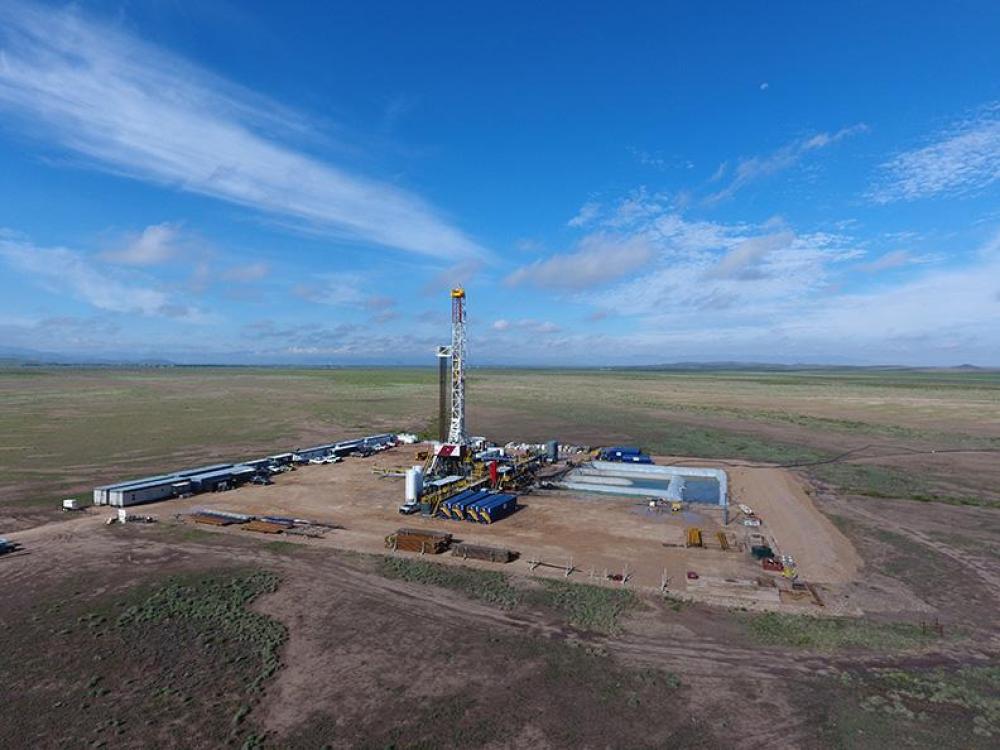 Apache Corp. has increased the number of drilling locations in the mostly wet gas play as it continues oil tests and optimizes designs. (Source: Apache Corp.)

HOUSTON—When Apache Corp. (NYSE: APA) stepped into the Delaware Basin’s Alpine High area in 2015, the company’s perceptions did not come off as a ringing endorsement: complex geology with uneconomic dry gas, infrastructure assets with minimal value and a lack of endorsement from the industry.

But today’s reality, as outlined by Apache CEO John Christmann, has put those prior perceptions to rest.

“What we’ve proven today is we’ve got 6,000-ft column and multiple targets, high BTU gas and improving oil production as well and there is a lot of wet gas,” Christmann told a crowd gathered for RBN Energy’s PermiCon. “We now have decades of high-return inventory that we are excited about.”

Plus, Apache’s equity ownership in Altus Midstream, a joint venture (JV) partnership with midstream investor Kayne Anderson Acquisition Corp. (NASDAQ: KAAC), is valued at about $2.5 billion based on a share price of $10. The asset mix includes gathering and processing and potential JV long-haul pipelines, according to Apache.

Compared to activity around Alpine High in 2016, Christmann said today the “industry is right along our doorstep,” having acquired acreage since the discovery was first announced outside Apache’s more than 340,000-acre territory in the play. 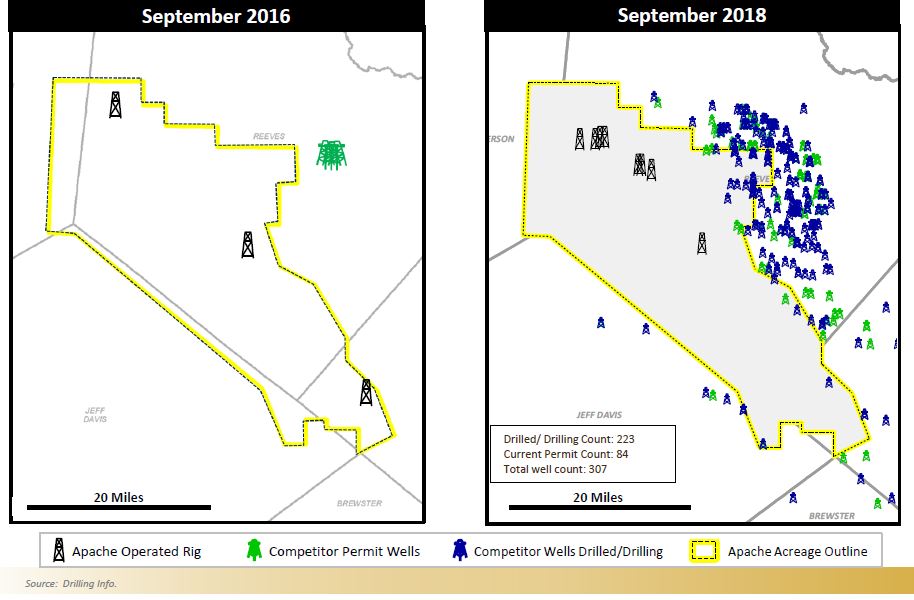 The keynote was delivered as production from the biggest oil field in the U.S.—the Permian Basin—continues to grow, although challenged by infrastructure constraints and lower regional oil prices. Operators like Apache continue to work through growing pains amid improving global market conditions.

Apache’s vertically-stacked emerging oil and gas play sits in the Delaware Basin, mostly in Reeves County, Texas. The company announced the discovery in September 2016, estimating 75 trillion cubic feet of rich gas and 3 billion barrels of oil in place in the Barnett and Woodford formations plus potential in the shallower Pennsylvania, Bone Springs and Wolfcamp formations.

Since the discovery was announced, the play has evolved significantly.

As of September 2018, Christmann said the number of cumulative wells drilled increased from 14 to 162, and wells on production went from nine to 111. The rig count more than doubled, moving from three to seven.

The number of confirmed landing zones swelled from two to 13, while the location count ballooned from between 2,000 and 3,000 to more than 5,000. “It’s more than that today,” Christmann said. But “We have not come out and updated those numbers yet.”

In September, rich gas processing capacity for Altus Midstream was at 380 million cubic feet per day (MMcf/d) and lean treating and compression at 400 MMcf/d. If all goes as planned, this will increase to about 1,300 MMcf/d and 480 MMcf/d, respectively, with five cryogenic processing plants operational by year-end 2020 as Alpine High transitions to full-field development.

Showing a 60-mile structural cross section of Alpine High, Christmann pointed out penetrations in the dry gas window in the Northern Flank and wet gas up through the crest and into the oil window. To the south, temperatures are cooler, “so the window actually shifts a little bit and becomes more liquids-rich and oil-rich,” he explained. 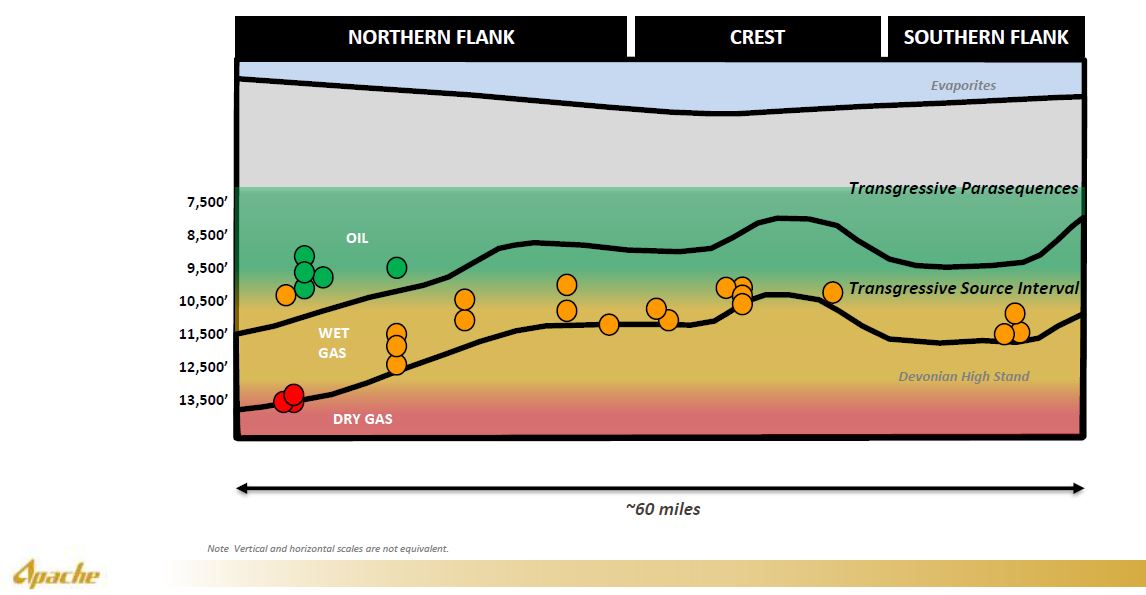 Apache has focused most of its drilling and testing in the Northern Flank, primarily because of the way its lease was set up, Christmann said. “The rest is along the bottom of the Woodford because we had to drill down to the base of the Woodford to hold the acreage.”

Going forward, the company will move up the column and into more of the wet, richer gas and oil, he said.

As the company works to develop the play, Apache—like its peers—also remains focused on maximizing recovery, increasing efficiency and lowering costs.

In all, about two-thirds of Apache’s $3.4 billion capital budget for 2018 is directed toward the Permian: 25%, Alpine High upstream; and 32%, rest of the Permian. Sixteen percent of the budget is allocated for Alpine High midstream, 20% for international operations including Egypt and the North Sea; and 7% elsewhere in the U.S.

While holding its rig count essentially flat since second-quarter 2017, Christmann said Apache has increased its oil production by 50% in the Midland and Delaware basins to about 61,000 barrels per day. The company attributed the growth to strong well performance, increasing inefficiencies, multiwell pads and longer laterals.

Apache is scheduled to release its third-quarter 2018 earnings after the market closes Oct. 31.