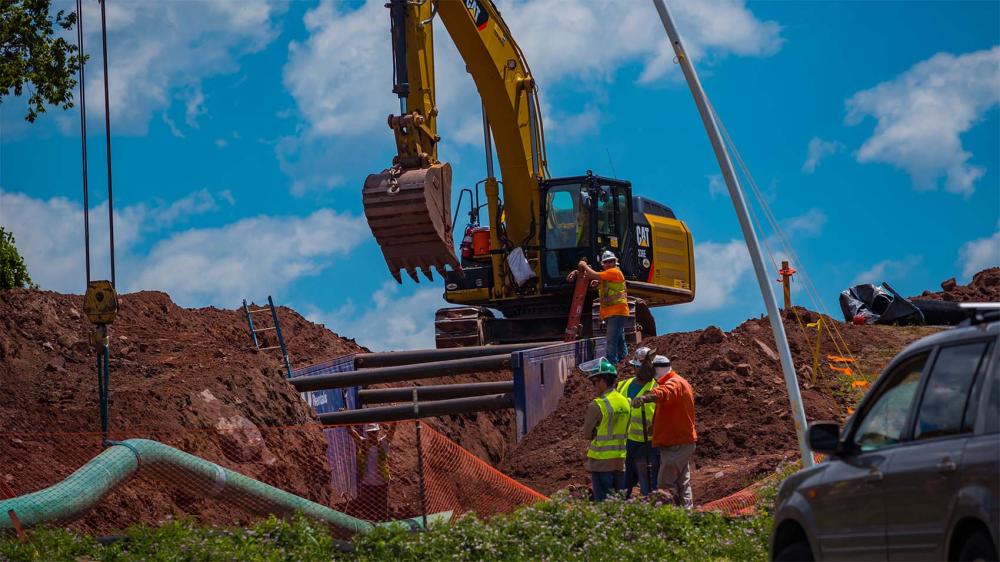 A gas pipeline under construction in Pennsylvania. (Source: George Sheldon/Shutterstock.com)

Will the Mountain Valley Pipeline in Appalachia be among the last of the large greenfield projects? Colette Breshears, senior research manager and head of North American infrastructure at Wood Mackenzie, thinks so.

“Mountain Valley Pipeline is having a very tough time of it,” Breshears said at the recent Midstream PA conference. “Tougher than [Energy Transfer LP’s] Rover had.”

Despite the project’s travails, Wood Mackenzie expects Mountain Valley to be completed. Such has not been the case for many major projects, like the Atlantic Coast Pipeline that was canceled last year. Which almost begs the question: why would a pipeline company put up with the aggravation of pursuing major projects like this? Simple answer: the gas production outlook demands it.

“In order to continue to build that out past 2021, 2022 into 2025, into 2030, 2040, we will need more infrastructure,” Breshears said. “But when we are looking at this infrastructure, we have to acknowledge that pipeline buildout is going to be very difficult.”

So where can abundant gas production from Appalachia go? The Midwest markets—Illinois, Indiana, Michigan—are popular destinations.

“This has historically been a fantastic market for natural gas,” Breshears said. “There’s a lot of demand in those areas. The Midwest has experienced a lot of very cold winters. There’s a lot of industry there, and there’s not a lot of production in those states to help supply that demand.”

Providing that production is easier to do. Those states are also relatively nearby and passing through industry-friendly Ohio is not an unpleasant experience for a pipeline builder, she said. Same goes for that South Ohio corridor, where projects pass through as they connect to West Virginia, or down to the Gulf of Mexico, another huge demand corridor for natural gas.

Then there is the Northeast, a heavily populated area that forces a pipeline company to just through many more hoops than when it builds in agricultural areas, such as those in northern Ohio.

Pipeline construction hit an inflection point in in early 2019, Breshears said. The pace of new capacity being added on flattened, but it wasn’t just a matter of regulatory delays. Wood Mackenzie analysts also saw that pipelines in service were effectively meeting demand.

Then major projects started to fall.

“I don’t think the cancellation of Constitution really came as a surprise to anyone,” Breshears said. The project, a 125-mile pipeline designed to bring gas from the Marcellus Shale to New York State, ran into intense water quality permit opposition from the state government and was canceled in late February 2020. The Williams Cos., which had a 41% share in the greenfield Constitution, said at the time that the regulatory hurdles posed too much of a financial risk. The company took a $145 million hit on the project in 2019.

In May 2020, New York denied a water permit for the Northeast Supply Enhancement Project. This was a mostly brownfield Williams project but it involved the construction of an additional 37 miles of pipe and compression to the company’s Transco system. It would have delivered 0.4 Bcf/d of southeastern Pennsylvania gas to New York City but Williams responded to the pushback by pulling out.

The third to fall was the Atlantic Coast Pipeline, a 1.5 Bcf/d project with a delay of three-and-a-half years and counting, and a price tag that had increased by more than 70% since it was first proposed. The ongoing cost uncertainty convinced Duke Energy Corp. and Dominion Energy Inc. to let it go in July 2020.

Four on the Way

Despite facing the same regulatory uncertainty that felled Constitution, Northeast Supply and Atlantic Coast, Wood Mackenzie expects four other major projects to be completed in the Northeast.

PennEast: The 120-mile pipeline with capacity of 1.1 Bcf/d originates in northeastern Pennsylvania targets an endpoint near Trenton, N.J. The joint venture led by Enbridge Inc. is moving forward on construction of the Pennsylvania portion of the line while it awaits a decision from the U.S. Supreme Court on whether it can use eminent domain to build the pipeline in New Jersey.

Northern Acccess: The 100-mile brownfield pipeline system under construction by National Fuel Gas Co. will deliver gas to multiple points in New York State. The company has requested a FERC extension to 2024 for its in-service date.

Regional Energy Access Expansion: Williams Cos. has filed with FERC to begin service in late 2023. The project relies on existing Transco pipeline infrastructure to move gas from Leidy Township, Pa., to points in New Jersey and Maryland.