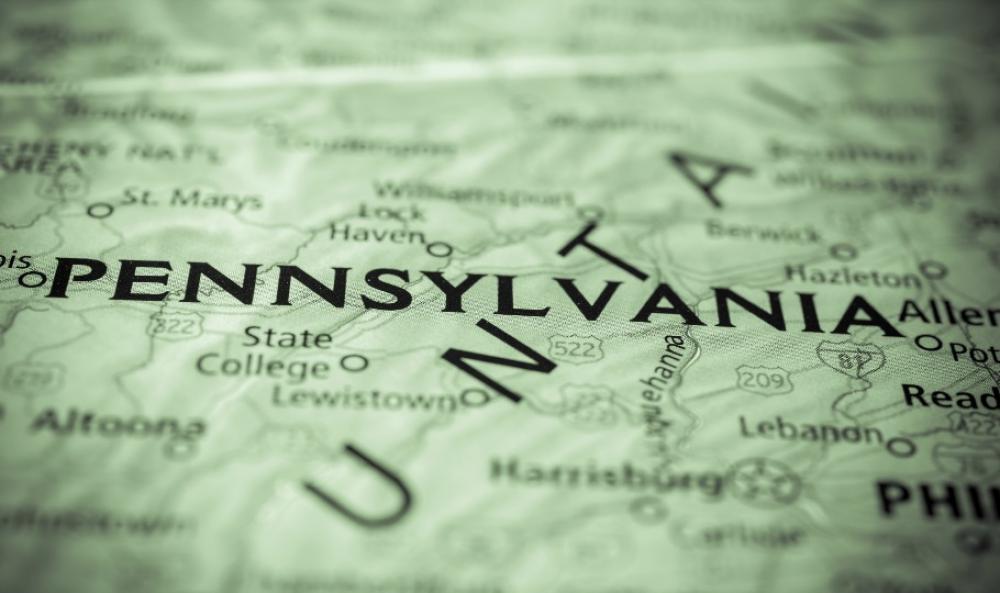 Allegheny County, Pennsylvania sits atop vast reserves of natural gas, enough to qualify it as a super-giant gas field. But various factors, including high population density, have conspired to place most of these reserves off-limits to full development. Allegheny and two adjoining counties, Washington and Greene, are situated within the “core of the core” of the recently named Appalachian Mega-Giant Gas Field. Each county has recoverable natural gas reserves likely ranking them at or near the highest county natural gas reserve base in the nation.

As the second-most populous county in the state and home to Pittsburgh, Allegheny County presents unique challenges to full development of the resources. By a quirk of nature, these three counties lie atop some of the best shale reservoir rock in the world in the Marcellus, Utica and the lesser-known Upper Devonian Burket/Geneseo Shale.

Estimates of total technically recoverable reserves exceed 150 trillion cubic feet equivalent (Tcfe) for Allegheny County alone (equivalent converts 1 bbl of liquid to 6 Mcf of gas). This isnearly five times the minimum required for classification as a super-giant gas field (30 Tcf) and enough natural gas to provide all of America’s needs for more than five years. At today’s currently depressed market prices, the total value of this resource exceeds $400 billion, and the value of potential royalty payments to landowners in the county is more than $60 billion.

Of the three counties, Allegheny County provides the greatest challenges to development of the resources due mainly to the urban/ suburban nature of the majority of the county. Residences, office buildings, political issues, regulatory restrictions, topography and splintered subsurface rights all contribute to prevent full development of the resources. To date, only the peripheral, semi-rural margins of the county have seen any shale gas development at all. These obstacles are likely to preclude development across large portions of the county, and only 4% of the entire county’s acreage appears to have viable drilling locations available. 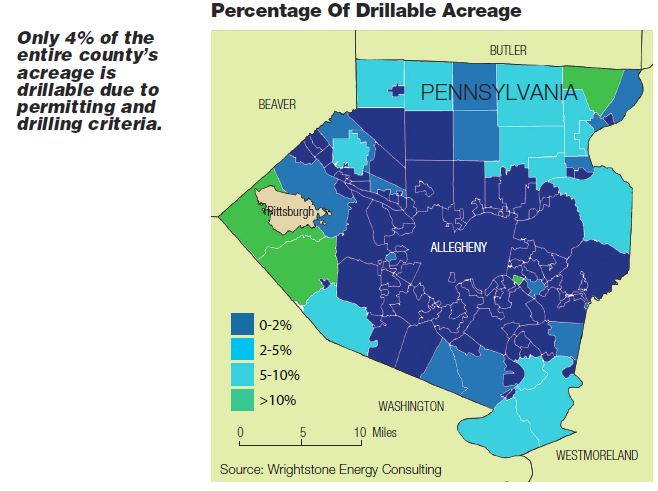 The size of the prize

The Marcellus Shale is the most prolific natural gas resource in the world, and Allegheny County is situated in the heart of some of the best productive areas of the “Southwest Core Area” of the resource. The productive portion of this black, organic-rich shale is about 80 feet in thickness and found at drilling depths ranging from 5,500 feet along its western boundary with Beaver County deepening to more than 7,000 feet in the southeast. The hydrocarbons that would be produced in the county vary corresponding generally to depth, with liquids-rich wet gas in the shallowest areas in the west that would feed the yet-to-be-built Shell ethane cracker plant, and trending to dry gas in the southeast.

Based on production results from existing wells completed by top-tier companies surrounding and within Allegheny County, it is estimated that the Marcellus has 58 Tcfe of technically recoverable reserves. Significant liquids and ethane contribute to the large converted equivalent numbers in the wet gas areas. The Upper Devonian Burket/Geneseo Shale lies only 200 feet above the Marcellus. Production and reservoir characteristics are similar to the Marcellus, so much so that the Burket/ Geneseo has been dubbed “little brother” to the Marcellus. Pittsburgh-based EQT Corp. has been the leader in development of this reservoir and announced in its second-quarter 2016 earnings report that it would accelerate its drilling program for the second half of this year and drill nearly as many Upper Devonian wells as Marcellus wells. Recoverable reserves per well for this reservoir are about 70% of the underlying Marcellus, and total projected Burket/Geneseo recoverable reserves for Allegheny County are 41 Tcfe. The Burket/Geneseo has a similar liquids- rich to dry gas trend as the Marcellus.

The Utica Shale is 5,000 feet deeper than the Marcellus, ranging from 10,000 feet in depth in the northwest to more than 14,000 feet in the county’s eastern limits. The extreme depth and high pressures lead to a considerable increase in well cost. According to the most recent corporate reporting, per-well costs are projected to be $12 million to $15 million compared to a cost of less than $6 million for a Marcellus well in the same area.

No Utica Shale wells have been drilled yet in Allegheny County, but the evaluation of key parameters indicates that the county should be in the heart of the high potential area for dry gas production. Recoverable reserves for the Utica in the county are pegged at 52 Tcf, although those numbers could more than double if the recent well results are indicative of its potential across the county.

The latest projections from Range Resources indicate that, based on its gas-in-place mapping combining all three shales, Allegheny County and its neighbor to the south lie atop the highest in-place reserves within the largest natural gas field in the world. Total recoverable reserves for the county are estimated to be 152 Tcfe, which would be larger than many gas-producing nations.

The primary impediment to development is directly linked to the high population density of the county. State-mandated setbacks require that the surface location of any horizontal well be at least 500 feet from any habitable dwelling or place of business. With more than 1.2 million residents in the county’s 127 municipalities and townships, much of the heavily populated central swath of the county leaves very few places on which to locate a drilling pad. Complicating the availability of locations is a required 300 foot set-back from streams or rivers. Additionally, like the rest of western Pennsylvania, the topography is hilly, and pads can only be economically constructed in areas with either flat or moderate slopes.

A detailed analysis of all areas that are potentially legally available for drilling of unconventional wells and with a slope of less than 15% revealed that fully 95 jurisdictions had less than 2% of their entire acreage that would meet the criteria for permitting and drilling, and the entire county had only 4% drillable. 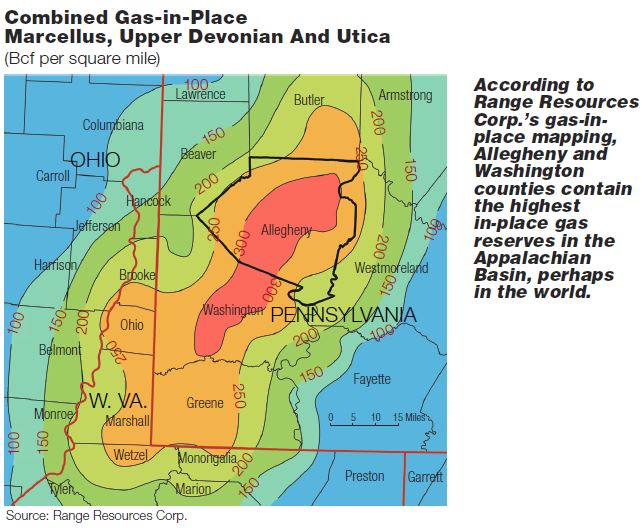 Most of the areas on which a pad could be located within the challenging central high-population areas would be problematic as many of the legally drillable areas are located on golf courses, within county parks or nestled within suburban communities.

Finding a site to locate a drilling pad in the county is just the beginning of resolving development of the resource in the highly populated areas, as the oil and gas ownership is generally highly fractured into small plots held by each surface owner (sometimes severed) that are often less than one-quarter of an acre. With no forced pooling in Pennsylvania, an operator would be required to acquire a lease agreement with each owner that a lateral would cross, requiring the leasing of possibly hundreds of leases for each proposed lateral drilled. Additionally, some areas have had shallow gas and oil drilling dating back to the late 1800s, leading to a nightmare of severed ownership issues.

Politically, there has been strong opposition to horizontal drilling near or within communities, and any proposals for developing the heaviest populated areas would meet strong resistance. Pittsburgh enacted a ban on drilling in 2010 that remains in place.

Some progress has been made in accessing the resources within Allegheny County on properties in the semi-rural areas controlled by local government entities, with development occurring by Consol Energy on the approximately 9,000-acre Pittsburgh International Airport lease and by Range Resources on their lease allowing them to drill beneath one of the nine county-owned parks.

Without the political will or the need to develop this resource, it is likely that the bulk of this treasure will not be accessed.

Gregory Wrightstone is a petroleum geologist and geologic consultant at Wrightstone Energy Consulting, based in Pittsburgh. Justin Skaggs is a geologist and GIS specialist with Pin Oak Energy Partners in Akron, Ohio.

2023-01-18 - Oil prices balance out over possible U.S. recession worries despite earlier gains due to optimism over China's reopening. 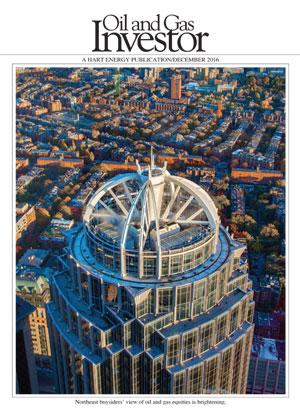