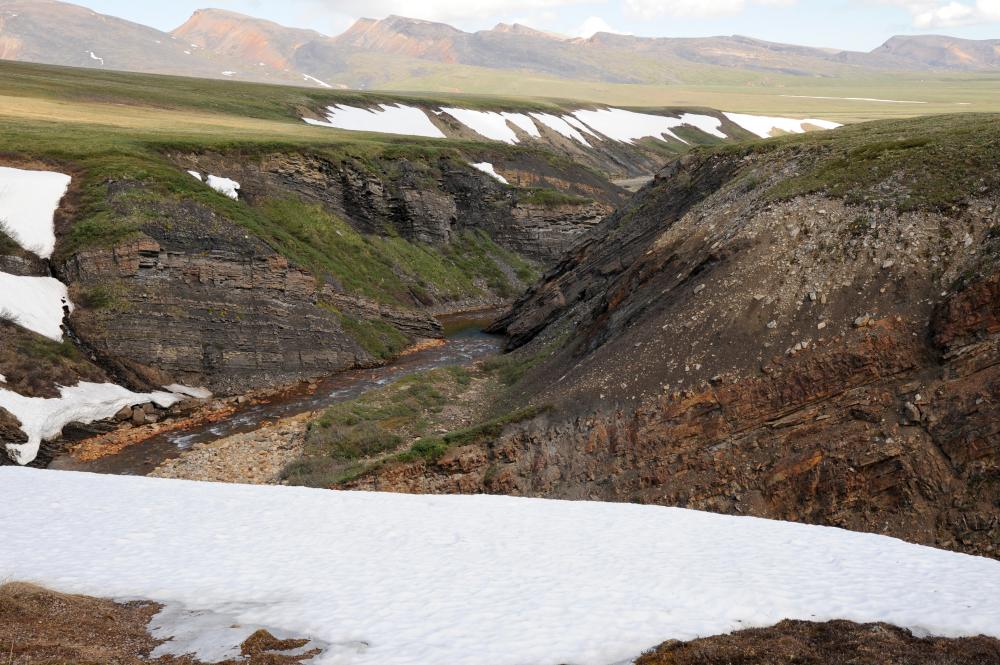 The Triassic Shublik Formation outcrop along Fire Creek in the Shublik Mountains northeast of the Brooks Range exposes one of the most complete stratigraphic sections in Arctic Alaska of the Shublik Formation, generally the richest source rock of the North Slope. (Source: USGS)

The next frontier in the next generation of unconventional oil and gas production might well include development in one of the world’s largest untapped resource potentials—the Alaska North Slope (ANS). In 2012 the U.S. Geological Survey (USGS) conducted an assessment of potential oil and gas resources in the ANS, which it called “an unexplored frontier,” and found technically recoverable shale oil resources of up to 2 Bbbl of oil. The survey also found the region holds technically recoverable reserves of shale gas of up to almost 2.2 Tcm (80 Tcf) of gas.

Unconventional development has yet to gain steam in the far northwest, but companies like 88 Energy are exploring possibilities. According to an April operations update, 88 Energy completed 3-D seismic surveys of its Icewine and Yukon Gold this spring in Alaska’s Prudhoe Bay region. The company drilled and stimulated its Icewine #2 well to conduct testing and realized average flow of 52,386 cu. m/d (1.85 Mcf/d) of gas, according to the report. However, the project was shut in for the Arctic winter, with plans this year to reinitiate flow testing using artificial lift, 88 Energy reported.

Meanwhile, Congress voted in 2017 to open for drilling Alaska’s Arctic National Wildlife Refuge (ANWR). The USGS has estimated technically recoverable oil within ANWR could lie between 5.7 Bbbl and 16 Bbbl of oil.

David Houseknecht is a senior research geologist at the USGS and has authored several reports and studies, including the SPE-23796 paper, on Alaskan oil and gas development and resources. Houseknecht joined E&P for an exclusive interview on the state of unconventional development in the ANS and the latest on the potential for ANWR.

E&P: What is the state of unconventional resource development in the ANS?

Houseknecht: There was a great flurry of activity starting in about 2008 or 2009. Great Bear [Petroleum] entered in a surprising way into a state lease sale and leased a huge swath of acreage straddling the [Trans Alaska Pipeline] system. The reasoning there was that if an unconventional play was going to work, proximity to a pipeline was going to be critical. The Great Bear strategy was to position itself for the Triassic Shublik Formation, which generally speaking is the richest oil-prone source rock on the North Slope. Then the second entrant into the unconventionals was Rampart Energy, and it leased a swath of land generally to the west, northwest of the Great Bear acreage.

[Rampart Energy was] focused mainly on the Brookian source rock interval. [Rampart Energy] ended up not drilling any wells, and its lease holdings largely got flipped to other companies. The other entrant was a collaboration between Burgundy and 88 Energy, and the operating company that they formed is Accumulate. They position themselves generally south of the Great Bear acreage, and their intention was to pursue the Brookian source rocks. So up until this point, there really have only been four boreholes drilled specifically targeting the source rock intervals. The first two wells were the Great Bear wells—Alcor and Merak—and even though their primary objective was the Shublik, they also cored the lower part of the Kingak Shale in the early wells and also the Brookian Shale in the early wells.

The second two wells that have been drilled were practically twins, and those were the two Icewine wells. The bottom line information that’s available from the Great Bear wells is that the Shublik was of higher thermal maturity than expected, and no flow tests were conducted in either of those wells. The third well Great Bear drilled was not specifically an unconventional objective, and it was drilled as Great Bear started facing the fact that oil prices were cratering. Great Bear started to evaluate conventional prospects on their acreage and so the third well they drilled, Alkaid, had as a primary objective some conventional targets in the Brookian. 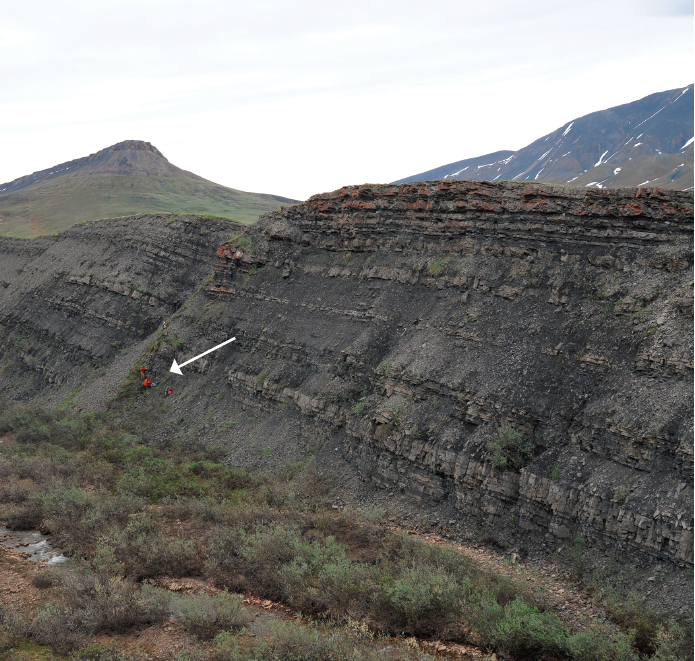 E&P: It sounds like Alaska could be in the early stages of some development.

Houseknecht: I think that’s a fair assessment, because with oil prices rising again I think there is an increasing probability there will be more prospects evaluated. Having said that, I know that everyone who is and has been involved with unconventionals has turned their attention more in recent years to conventional prospects on their acreage and, of course, since they have large 3-D surveys they’re in an ideal position in some very attractive acreage tracts to evaluate that.

One of the things that’s really shocking when you look at the North Slope is there is an area in the middle of the oil window east of the Sagavanirktok River and west of ANWR that’s about 2,000 sq miles [5,180 sq km] where there are just a handful of wells that were drilled. All but one of them were drilled in the 1960s, and there are a lot of big-box lease holdings in that area. So if I were to prognosticate, I would think we will see more conventional prospects tested in the near-term future, and those may open the opportunity for more unconventional testing when prices rise a bit farther. 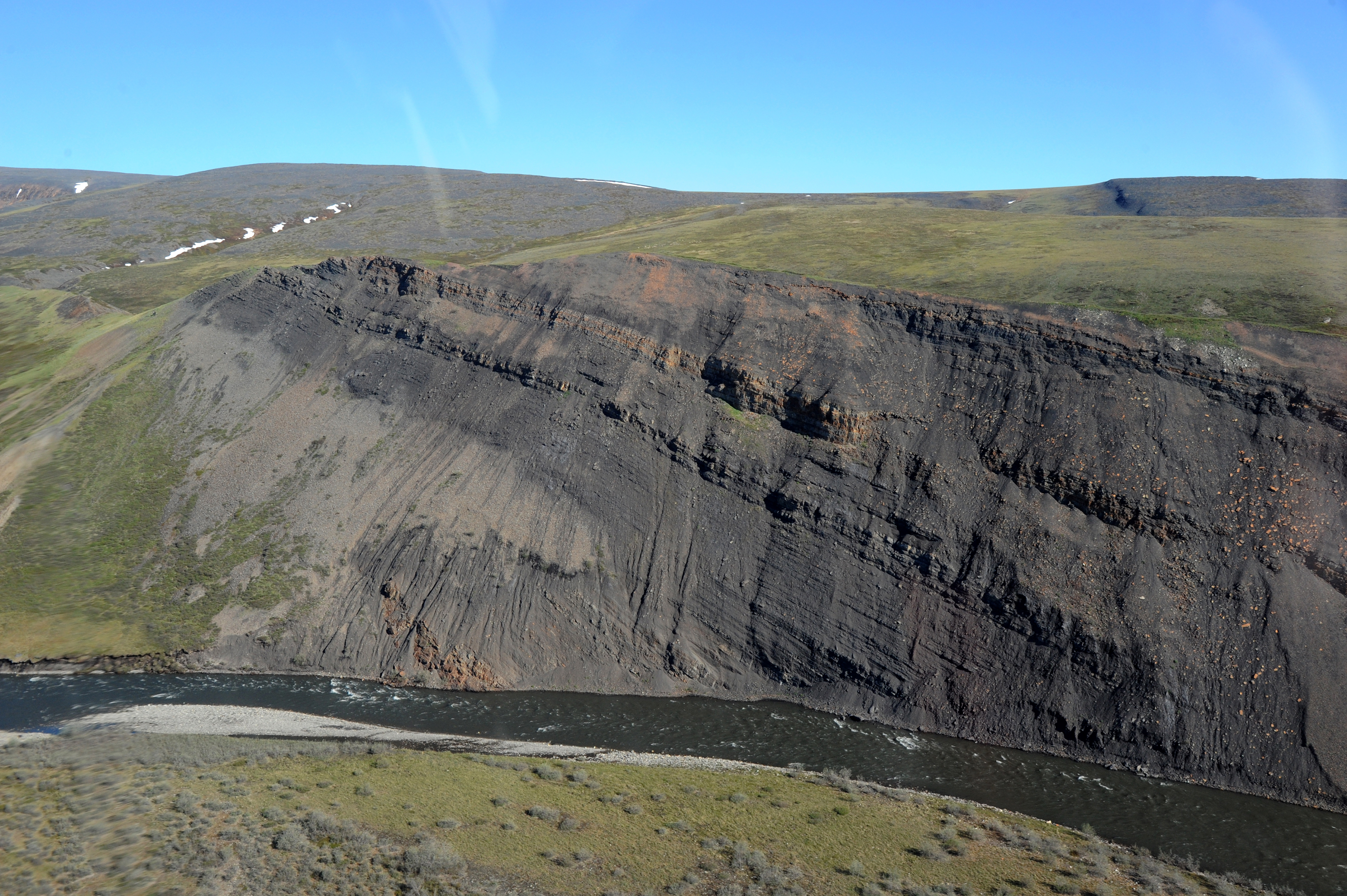 E&P: What types of challenges do you think operators will face when developing unconventionals in the North Slope?

Houseknecht: The greatest challenge is one of economics because the operating costs on the North Slope are at a premium relative to the Lower 48. The other aspect is, because of the limited infrastructure, there is likely to be an added economic burden because you don’t have a neighborhood pipeline like you do in the Lower 48. That’s why the Great Bear wells and the Accumulate wells have been drilled literally right on the pipeline. They were taking their shots at the most economically viable areas to explore.

Going forward I think the other issue will be whether or not the North Slope [operators] will be willing or Alaska will be willing to sustain the kind of footprint that comes with unconventional development. The development of conventional resources [in Alaska] is quite different than what you see in the Bakken or the Eagle Ford or any of the other unconventional plays in the Lower 48, so there is going to be some issues around surface impact and whether or not permitting and authorization of that sort of infrastructure would be palatable to the people making decisions in Alaska.

On the positive side, relative to the Lower 48 is that the area of the best potential for unconventional resources has 1,000 ft [304.8 m] or more of permafrost, so you’re unlikely to have the kind of issues that are associated with massive fracks and things of that sort in the Lower 48.

E&P: Could you provide some details on some of the key plays there in terms of the size of available resources?

Houseknecht: Because there have been no flow tests performed on any of the rocks that have been drilled specifically for unconventional accumulations, it is very highly uncertain. When we completed our oil and gas assessment in 2012, we estimated half a billion barrels in the Shublik Shale oil assessment unit and about the same amount in the Brookian source rock intervals.

The Kingak we assessed at having less potential mainly because, for the most part, it lacks brittle facies. It is quite a ductile unit, and there was concern when we did the assessment about frackability, so we only assess a mean of 28 MMbbl of oil in the Shublik play. Anybody who is drilling into the Shublik will automatically have a look at the Kingak because the Kingak is resting almost directly on the Shublik across most of the North Slope.

E&P: Do you see any similarities between the unconventional resources in Alaska and some of the other North American plays, or are they completely different?

Houseknecht: The biggest challenge is the Shublik because there are not that many unconventionals in the Lower 48 that are calcareous, and the system that looks like the best analog may well be the Niobrara. But I think at this point it is fair to say that our people who are working on shales in Alaska and the Lower 48 are actively investigating how well the Shublik may compare or contrast to the Niobrara.

In terms of an analog for the gas part of the Shublik, the Fayetteville comes to mind because lithologically it is quite similar with a condensed shale interbedded with the very fine-grain carbonate. In the Brookian the analogs there could include any number, but probably some of the Gulf of Mexico plays would be suitable; maybe the Haynesville, but again we’re in the infancy of trying to make this comparison because with only four wells having been drilled into these plays, and the cores generally not being available, it’s a little challenging to actually make the analog comparison.

E&P: How will the opening of the ANWR impact possible unconventional development in that region?

Houseknecht: I would be surprised if the same companies would be interested in ANWR as appear to be mainly interested in the unconventionals. And any opening of an untested, completely unexplored conventional play like ANWR would tend to have a bit of a negative impact on shale or unconventional exploration. The companies that historically have been interested in ANWR, of course, are majors, multinationals for the most part, and at this point in time there is a crunch in time because the U.S. Department of the Interior is attempting to do the first lease sale on ANWR in 2019, and the exploration application for conducting a 3-D survey in ANWR was just recently submitted. The plan, if all goes smoothly, is for that survey to take place in the winter of 2019 and the winter of 2020.

It appears unlikely that, if all goes according to plan with both the lease sale and the seismic survey, a 3-D survey would be available to the industry prior to the first lease sale. Having said that, that means the only seismic data that may be available for the first lease sale are the vintage 1984-85 2-D data, and those are now exclusively owned by the 11 surviving companies from the original ANWR seismic consortium.

Those, for the most part, are large companies. So it seems unlikely that a small, new player would appear at a 2019 ANWR lease sale in the absence of any seismic data at all. It is possible that a small company could in some way partner with one of the 11 companies that hold licenses to the 1984-85 data.