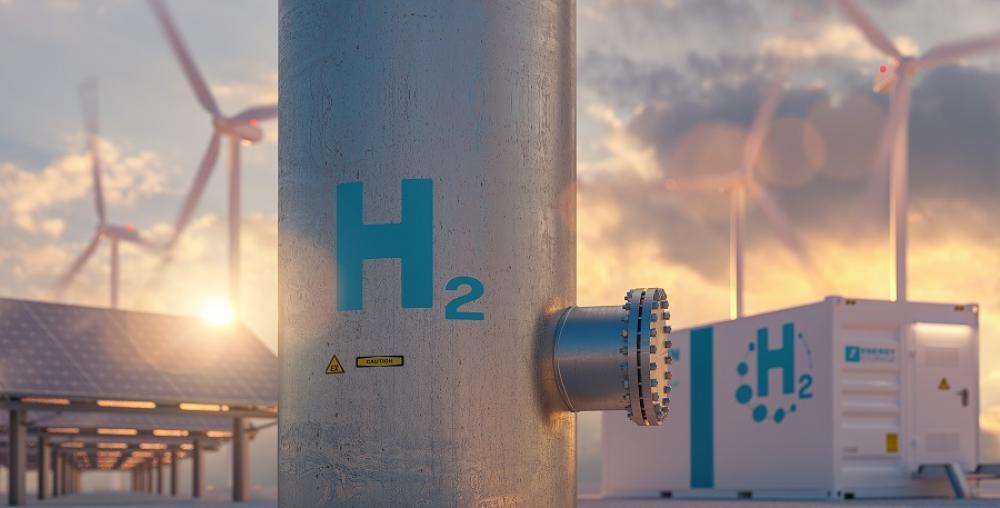 Pennsylvania-based Air Products is extending its first mover advantage as a hydrogen company by teaming with utility and power company AES Corp. to spend $4 billion in what could become the largest green hydrogen production facility in the U.S.

Demand for green hydrogen is expected to grow as the world seeks ways to lower its carbon footprint to slow global warming. The zero-emission alternative to fossil fuels is seen as a way to decarbonize hard-to-abate sectors such as shipping, aviation and other parts of the mobility market.

“It is absolutely in alignment with our higher purpose of doing something good for humanity,” Air Products CEO Seifi Ghasemi said Dec. 8 of the Texas project. “This project certainly does a lot to [give] other companies the capability of reducing their carbon emissions by using the zero-carbon green hydrogen. It creates significant value for our shareholders.”

Equally owned by Air Products and AES via a joint venture, the mega facility will be located in Wilbarger County, Texas, where more than 200 metric tons per day (mt/d) will be produced.  Plans also include about 1.4 gigawatts of new solar and wind facilities to generate electricity for electrolyzers for the project that has been in the making out of public view for more than two years. It aims to begin commercial operations in 2027.

Incentives made possible by the Inflation Reduction Act (IRA) sweetened the economics, prompting developers to spread word of the project.

“It is by far the largest green hydrogen project that anybody is doing in the United States,” Ghasemi said on a Dec. 8 call with analysts. “We are obviously very optimistic about the future of hydrogen in terms of not only the gray hydrogen that we make today, but also blue hydrogen and green hydrogen.”

The JV will handle the upstream part of the project, while Air Products will serve as the exclusive offtaker and marketer of the green hydrogen under a 30-year contract.

Air Products, which has in place a 600-mile pipeline from the Houston Ship Channel to New Orleans, is also building a $4.5 billion blue hydrogen complex in eastern Louisiana. Its global projects include a $5 billion green hydrogen-based ammonia production facility in Saudi Arabia.

Ghasemi said the Texas project helps position the company as a U.S. leader in both green in blue hydrogen.

Ghasemi said controlling the product, existing infrastructure and the benefits of tax incentives make the project an attractive investment.

The developers anticipate utilizing incentives made available in the IRA, including the 10-year production tax credit (PTC) for clean hydrogen production facilities. The PTC value is $3/kilogram for zero-carbon hydrogen.

However, because the facility will be integrated, developers will be able to take advantage of other credits, specifically those aimed at renewable power and associated with using old coal sites.

“The tax credits are doing what the U.S. government intended them to do, which is to accelerate the implementation of these kinds of projects in the United States rather than waiting another 10 years until the costs go down or the market develops,” Ghasemi said. “The tax credit has given us the incentive to announce the project and move the project forward because it makes it more economical to do it right now in the United States.”

Hopes are high on hydrogen’s ability to decarbonize major sectors of the economy and generate electricity. However, the promise of a burgeoning hydrogen market could go unfulfilled unless clean energy ambitions spur a pickup in demand.

Data from the International Energy Agency (IEA) show hydrogen demand was about 90 mt in 2020. Nearly all of the hydrogen—produced mainly from fossil fuels—was used for refining and industrial purposes.

It is also used to generate power for fuel cells.

Total hydrogen demand from industry could grow 44% by 2030, according to the IEA’s net-zero emissions by 2050 scenario. However, looking at the pipeline of projects, the IEA believes that only about 18% of the demand for low-carbon hydrogen could be met.

“We are obviously very bullish about the demand for hydrogen in general and green hydrogen specifically,” Ghasemi said on the call. “The product coming out of the first box out of the joint venture is gaseous hydrogen.”

The product, he said, could be moved by pipeline, liquefied and turned into ammonia to be moved by rail or mode of transportation, or turned into another useable green product. However, he was mum, on further details such as possible offtake agreements in the works.

“At this stage, we do not want to disclose the details of exactly what we are going to do with that because it is proprietary,” he said. “When we are ready we will make an announcement in terms of how we are going to use the product.”

The companies said if all the green hydrogen produced at its planned mega facility were used in the heavy-duty truck market (for fuel cells), more than 1.6 MMmt of CO2 emissions would be reduced from entering the atmosphere annually compared to heavy-duty trucks that run on diesel.

“Over the project lifetime, it [the facility] is expected to avoid more than 50 million metric tons of CO2, the equivalent of avoiding emissions from nearly five billion gallons of diesel fuel,” the release stated.

AES CEO Andrés Gluski said the company “believes that green hydrogen has a key role to play in decarbonizing transportation and accelerating the future of energy.”

The project is expected to “capitalize on AES’ position as one of the nation’s largest renewable energy developers and its global leadership in innovations such as energy storage systems and supplying around the clock clean energy to data centers.”

How much downstream investment will be needed for the project remains to be seen. Those costs depend on how the hydrogen is used.

Liquifiers would be needed if the hydrogen is liquefied, and pipeline infrastructure may be needed to move the hydrogen to its desired destination. Should developers opt to create another product with the hydrogen, there would be costs associated with that.

An advantage for Air Products is that it has existing infrastructure.