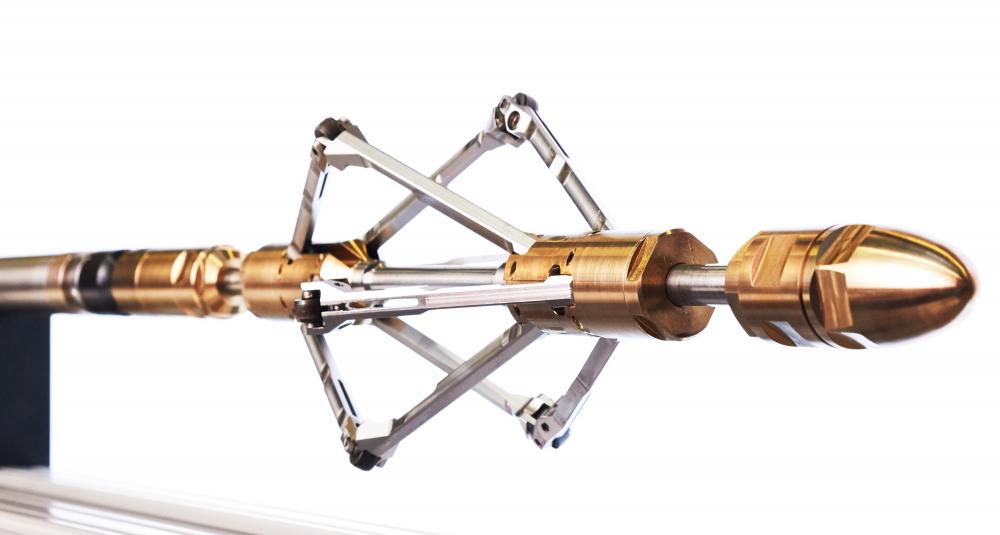 The downhole environment is riddled by challenges, impairing operators from a clear understanding of their wellbores.

“We use sound waves because they propagate through all the different types of downhole fluids that you would have trouble using optic systems in,” said DarkVision CEO Stephen Robinson. “The tool sends out sound signals that hit objects and they bounce back to our tool, then we process that data and reconstruct an image of the sound signals.”

The advanced imaging tool combines various proprietary ultrasound imaging technologies, is packaged to fit most wellbores and is capable of going thousands of meters underground. It can be deployed by wireline, e-coil, slick-line, coil, stick-pipe or tractor.

“It’s a pretty hostile environment,” Robinson said. “To make an imaging solution work at very high resolution, we had to develop and manufacture arrays that were extremely density, such that a large number of transducers could be packaged in such a small form factor.”

At ClearVision, an industrial imaging company for the packaging sector founded by Robinson, he developed intelligent camera systems that later laid the foundation for the downhole tool. The company was acquired by a U.S. competitor in 2011, and after exploring other industries, Robinson founded DarkVision in 2013.

He entered the industry when the market was booming and activity was growing in Canada. Seeing “a big industry with a lot of problems” along with antiquated technology, Robinson intended to design the next generation of optical systems that went beyond the existing capabilities of downhole cameras.

“But, when we spoke with potential customers, they showed us that the biggest Achilles’ heel with any kind of optical system was that you need clear fluids in order to see what’s going on downhole, and that can be anywhere from difficult to impossible,” he said. “We wanted to generate really high-resolution, high-fidelity imagery, but we wanted to be able to do it in the traditional downhole environment.”

In the end, he created an inspection tool that improves well integrity by detecting a large assortment of downhole issues like corrosion and erosion, casing breaches, damage to sand screens, production tubing defects and perforations. The newest version of the tool can work up to 15,000 psi, and it can reach up to 302 F.

“We’ve been spending a lot of time in the horizontal section of wells to image perforations and give the operator feedback on how much each one has eroded,” he said. “In the process of inspecting the entire wellbore we’ve seen a lot of really large casing breaches, where it looks like an erosional mechanism is chewing through the casing, with many cases reaching 100% wall loss,” he said.

“For instance, an operator has designed a well or a series of wells and now they’re going to perforate, frac and complete them. But they don’t have great feedback on how well that design is working and how that design should be changed for future wells to optimize proppant placement and production, so they have been using our tool as a way to give them visual feedback,” he said.

ConocoPhillips, Suncor Energy, and Cenovus Energy Inc. were among the first companies to trial the technology across their Alberta sites. DarkVision later closed a $5 million financing round co-led by Evok Innovations—a venture capital group funded by Cenovus and Suncor—and BDC Capital.

DarkVision has also secured multimillion-dollar awards from the Emissions Reduction Alberta (ERA) fund and Sustainable Development Technology Canada (SDTC). In August 2019, the company was one of multiple clean tech firms awarded funds from a $45 million investment by the Honorable Navdeep Bains, Canada’s Minister of Innovation, Science and Industry.

“We were able to leverage a lot of different types of government funding to take our technology from the lab and adapt it for the field,” he said. “The SDTC and ERA were two different grant funders that helped bridge the gap from the lab to making it work in the real world and going through all the iterations and changes to make that happen.”

Robinson has plans to expand to other areas of oil and gas like pipeline and wellhead inspection. A new product DarkVision is developing utilizes the same acoustic imaging system, but it is a forward-facing imaging head that looks directly downhole for fishing applications and imaging obstructions in wellbores.

By year-end DarkVision expects to open a couple of U.S. offices to further expand the company’s North American operations.