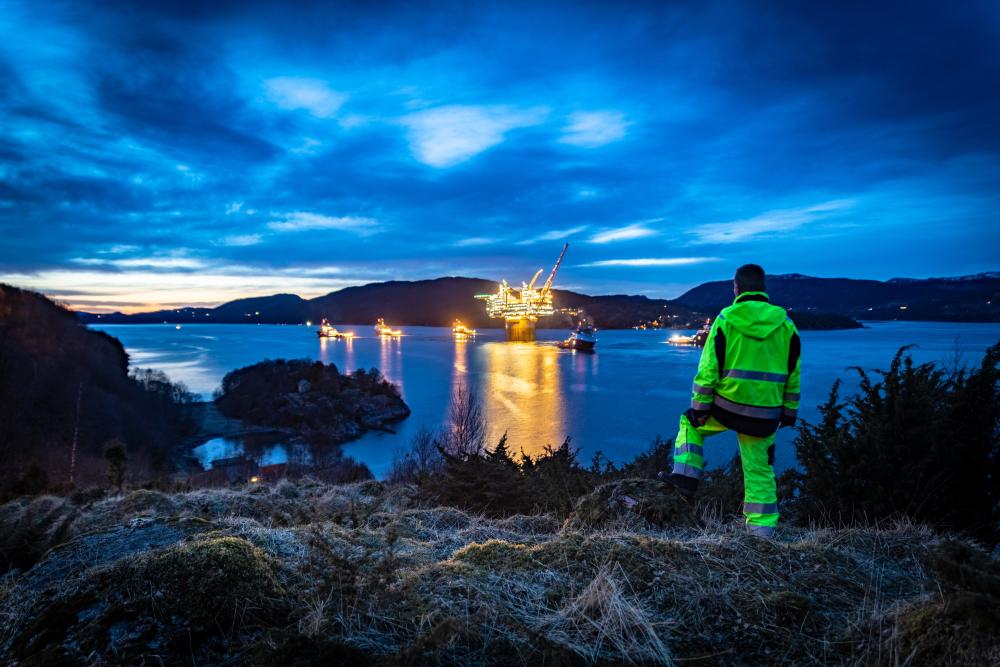 The Aasta Hansteen spar platform was towed to the field from Stord in April. (Photo by Olaf Nagelhus, courtesy of Worldcam/Equinor)

Norwegian operator Equinor is on track to deliver what could be the world’s fastest upstream project startup at its Aasta Hansteen development in the Norwegian North Sea later this year, thanks to a drive toward automation and running virtual startups.

The project, which is Norway’s first spar development and the country’s deepest water development to date, is due onstream in the fourth quarter this year, following tow-out of the 70,000-tonne, South Korean-built facility to the Norwegian Sea in April.

The project is a year behind its original 2017 startup date due to delays in construction. But Swedish power and automation group ABB said that by using its ABB Ability digital solutions to review the plant’s operability and then run a virtual startup, using a dynamic model, to find and resolve any issues before the actual startup, an estimated 40 days—or 2,700 man-hours—could be saved.

“We believe this will be the world’s fastest startup,” Marius Aarset, vice president of advanced services and products for the Norwegian hub of oil, gas and chemicals at ABB, told Hart Energy in an interview before the company’s announcement at ONS 2018 in Stavanger, Norway. 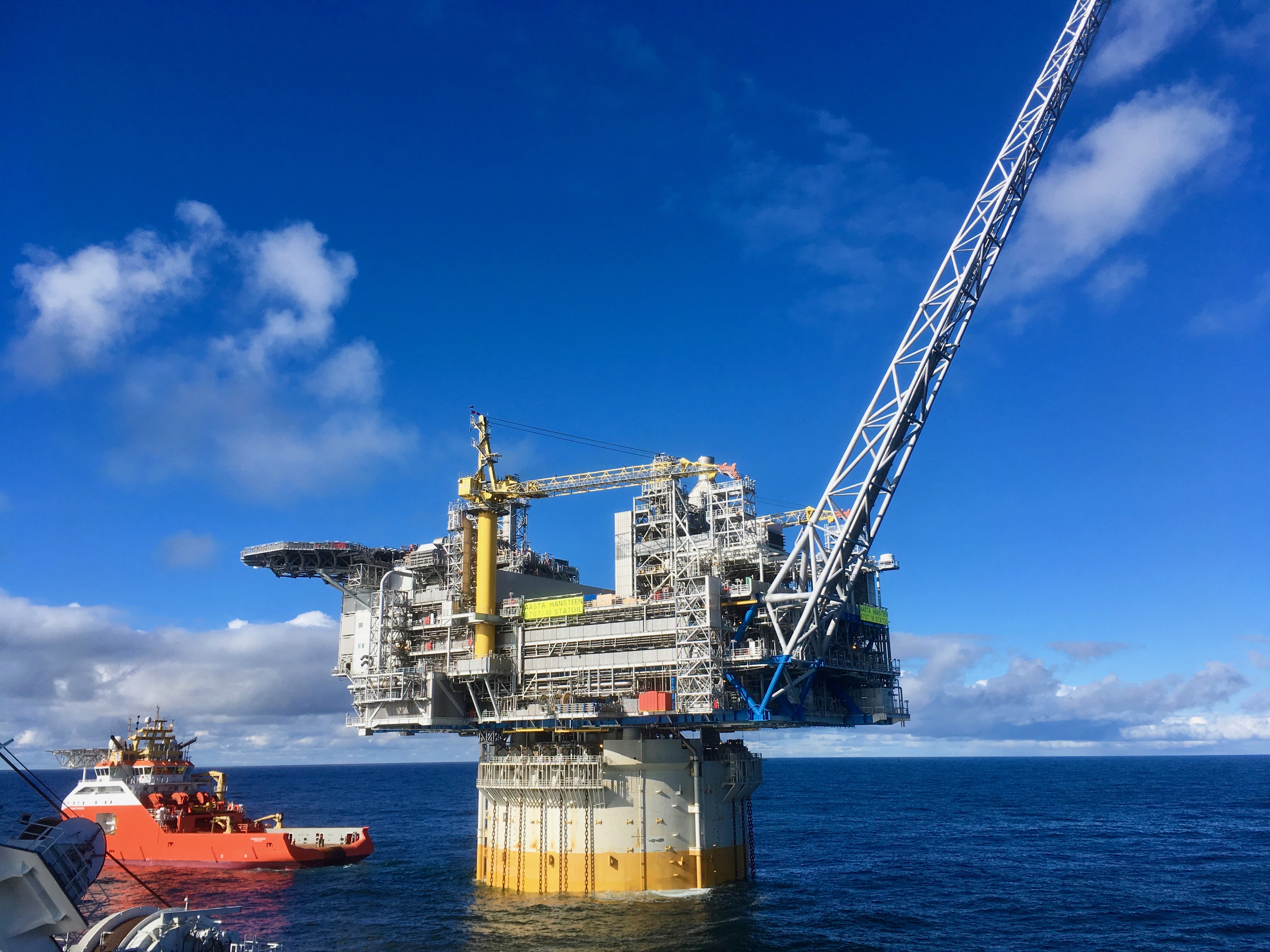 Delays in commissioning typically take 12 to 18 months, according to Aarset. He said they are a regular industry problem and have been exacerbated in some of the boom periods when access to experience has been slim. Even now, there are regular issues with commissioning, despite the industry’s relative maturity.

“There are common issues at a basic level,” he said. Part of the issue is a lack of focus on operability and a lack of effective feedback, according to Aarset. “So, what you see is that, even though a plant is built to specification, there are still a lot of issues, like a valve going a different way to what the operator thinks it should or control structures around one or more compressors, which probably work, but are more or less impossible for the operator to understand,” he said.

The challenge is that these issues go unnoticed until startup and then cause costly delays.

On Aasta Hansteen, which is in 1,300 m (4,265 ft) water depth in the Vøring area 300 km (186 miles) offshore, ABB is deploying its ABB Ability platform and its in-house domain expertise. This includes identifying logical sequences that take place during startup, such as having a valve in the right position, activating a control sequence and then piecing them together. They can be activated with one intervention, instead of multiple, so that it is a more automated process, according to Aarset.

ABB also used a dynamic model to test the design. “In the past, dynamic models were used for training the operators,” said Borghild Lunde, senior vice president for the Norwegian hub of oil, gas and chemicals at ABB. “Now we’re using them to test if there are fl aws in the design.”

ABB Ability 800xA contains a replica of the control loops and allows processes to be simulated so the system can be tested—what some would call a digital twin.

“Our teams went through the startup steps, identified and defined obstacles that needed to be improved, then used our ABB Ability System 800xA simulator to do a virtual startup of the plant,” said Per Erik Holsten, managing director for ABB oil, gas and chemicals. “At this stage, we made a lot of improvements for starting up and operating the plant. Through automating much of the process, we managed to reduce a complex set of manual interventions to just 20, which means we are all set to deliver what we believe to be the world’s fastest startup at first gas.”

In addition to reducing the time to first oil or gas, these systems have benefits during operations, according to Lunde. That includes helping to achieve optimum production faster by being able to tune facilities more easily with more automated processes.

“When you have to shut in a well for maintenance and want to start up again, you also get the benefit from this,” Lunde said. “It’s faster. We have cut the time it takes back to hours when it used to be almost days.”

It has taken the upstream industry a long time to adopt these ideas. Lunde started work on this area when her son was born, and he’s now 20.

“We have gained a lot of experience from various applications on various sites, but it’s not until recently [upstream] customers have been interested in the whole spectra, from commissioning through to startup and production as part of daily operations,” Lunde said. “In downstream this has been more accepted, because they have had to make money [and] they have to be performing. It’s now clearly on the table. For some of the smaller players, this can offer more value. For some operators, the ultimate goal is a more autonomous asset.”

Indeed, Aarset said Equinor would like to take its automation of the startup procedure even further, to have just one button, like you start a car. “This means operators can then put their focus on monitoring how the startup goes instead,” he said. “Like cars, we’ve gone from keeping a set speed to keeping a set distance from the car in front so the driver can focus on the overall picture in the traffic.”

Aarset said ABB already is working on what could be called “auto-pilot” systems for ramping up wells.

“There’s a way to go [to full automation], but there are elements that can be implemented,” Lunde said. “This is part of a bigger picture; there is a movement. In the last couple of years, we have seen a change. Digital is now more on the agenda, and there’s more acceptance that you can do more with software. These are additional skills, and there’s been a willingness to investigate and use them.”

Equinor had engaged ABB early on in the Aasta Hansteen project development, valued at $3.84 billion when it was submitted for government approval and now estimated to cost about $4.4 billion, for which ABB also has delivered full automation and safety systems and telecommunications.

Charif Souki said he remains “100% committed to Tellurian’s success” and is re-engaging to provide additional support as the Houston-based LNG company’s executive chairman.

Jack Thayer previously served as CFO at Exelon and Constellation Energy Group, both of which are Fortune 500 energy companies.

Tallgrass Energy, which agreed to a sweetened take-private offer from a Blackstone-led group last month, said the resignation of Gary Brauchle as CFO is not the result of any disagreement with the company.