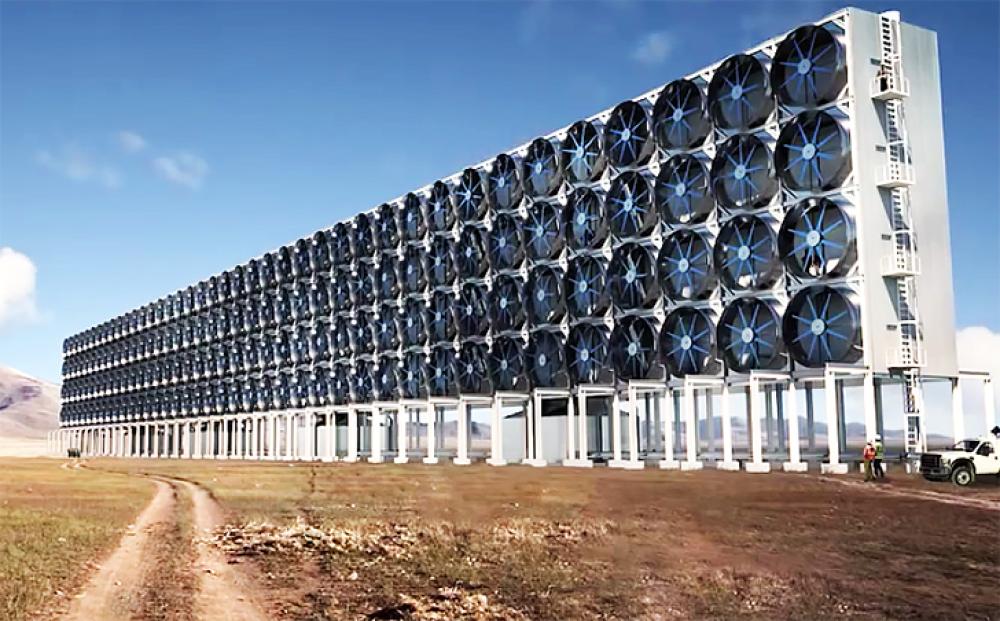 At industrial scale, an air capture facility will be factory-sized and can capture up to 1 million tonnes of CO2 per year with a single facility. (Source: Carbon Engineering)

Carbon Engineering Ltd. (CE) and Greyrock Energy Inc. recently announced that they are joining forces to produce ultralow carbon liquid transportation fuels using only water, CO2 captured from air and renewable power as inputs. Even with growth in sales of electric vehicles and other alternatively powered vehicles, it is estimated that liquid fuels (diesel and gasoline) will still dominate more than 85% of the fuel for transportation by 2035, according to BP. Finding ways to produce clean liquid fuels from alternative resources is imperative to supporting the massive growth in energy requirements worldwide as well as addressing the problem of climate change.

CE, a privately funded Canadian company, has developed and tested a technology for the capture of CO2 directly from the atmosphere. Greyrock Energy provides fuel synthesis technology and has marketed platforms that convert flexible combinations of methane, CO2 and hydrogen into liquid fuels such as gasoline and diesel.

Greyrock and CE have partnered to combine these systems in a full “Air to Fuels” (A2F) pilot plant in Squamish, Canada. This plant will come online in 2017 and will convert CO2 and renewable electricity into clean transportation fuels for testing and demonstration purposes. Within the plant CO2 and hydrogen will be converted into syngas, and in turn Greyrock’s Direct Fuel Production platform will enable the production of premium fuels from synthesis gas. Greyrock diesel meets ASTM D975 specifications and can be used directly in transportation vehicles. Greyrock gasoline blendstock can be used to upgrade and improve petroleum-based gasoline. Additionally, Greyrock products may be further processed to produce synthetic kerosene and other high-value products. 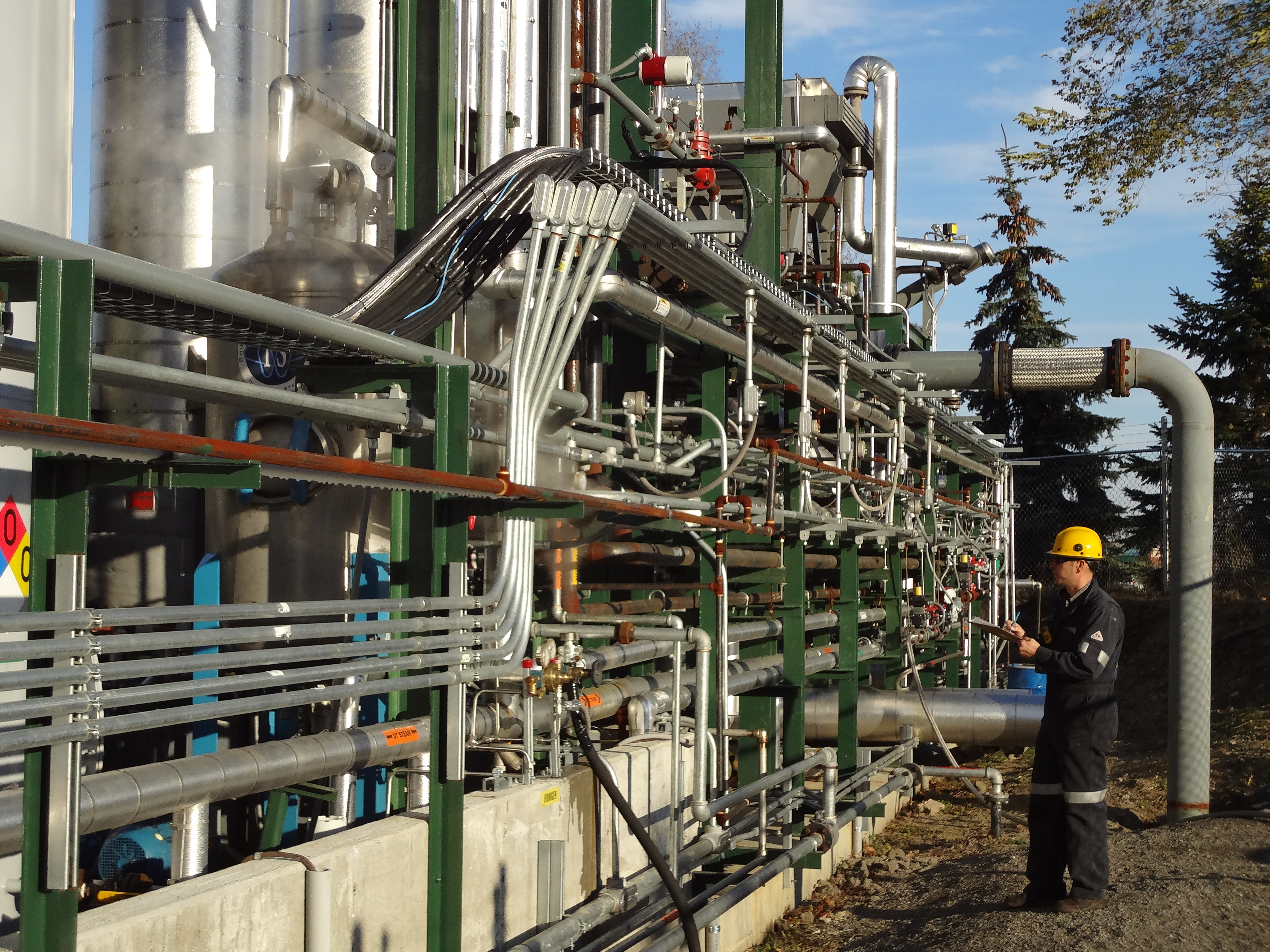 Greyrock developed and tested its technology for the conversion of synthesis gas to clean transportation fuels beginning in 2006. The company’s catalytic process eliminates the production and refining of wax normally associated with the manufacture of synthetic fuels. These fuels feature virtually no sulfur or aromatics as well as high cetane and good lubricity. This means that the fuels have premium environmental and operating properties over both petroleum-based equivalents and synthetic fuels produced from wax.

Greyrock recently released its Flare-to-Fuels product line for the capture and conversion of natural gas and NGLs, otherwise flared at wellhead locations, directly into clean synthetic fuels. These plants are designed to accept either 585 MMBtu/d or 65 MMBtu/d. They also are designed to be remotely operated moveable systems. Fuels produced from these plants can be used directly in the field or sold into ready fuel markets.

The World Bank estimates that about 140 Bcm (about 5 Tcf) of natural gas is flared annually, resulting in the emission of more than 300 million tons of CO2 into the atmosphere. Installation of the Flareto- Fuels systems to convert this gas rather than flare would result in the production of more than 18 billion gallons of clean fuels per year.

Greyrock also is working on deployment of its technology as a methodology to address stranded gas as a pipeline replacement. In addition, the Greyrock technology can be used to process coalbed methane, biogas and other gases.

The fuels produced by the process have premium properties, including zero sulfur, no aromatics, high cetane and excellent lubricity. Greyrock diesel also can be used as a blendstock to upgrade the quality of petroleum-based diesel fuels.

When the fuel is used in new diesel engines with advanced control systems, reductions in particulates, carbon monoxide, hydrocarbons and nitrogen oxide emissions can be achieved. These pollutants can be reduced further when the fuel is used in older lightduty and heavy-duty diesel vehicles with less efficient emission control systems, in off-road diesel vehicles such as tractors and bulldozers, in stationary diesel generators and in diesel-powered vessels.

In addition, these diesel fuels can reduce greenhouse gas emissions. Greyrock’s diesel engine emissions studies have shown that CO2 and methane emissions, both greenhouse gases, are reduced in new diesel vehicles by up to 3.5% and 9%, respectively, when compared to petroleum-based diesel fuels.

Greyrock recently was recognized with an R&D 100 Award, having developed one of the 100 most technologically significant new products of the year.

CE has been developing its direct air capture technology since 2009 and now has eight core patents and a system proven by successive prototype and pilot demonstrations. CE’s air capture system is built on a “wet scrubbing” air contactor that uses a strong hydroxide solution to capture CO2 and convert it into carbonate. This is paired with a regeneration system based on calcium cycle processing borrowed from the pulp and paper industry and adapted to air capture-specific needs.

CE has an industrially scalable low-risk air capture technology that is ready for commercial deployment. At industrial scale, an air capture facility will be factory- sized and can capture up to 1 million tonnes of CO2 per year with a single facility. All energy demands for plant operation and compression to the final purified 150-bar CO2 output stream are included in this value. Further, the system can be powered by renewable energy, and in the case where natural gas is used to thermally heat the CE “calciner” module, all CO2 from combustion is captured and purified along with that captured from air.

The A2F pilot project is on track to be built and tested in 2017 and forms an important step toward larger scale commercial facilities that will produce these same fuels for local transportation markets. Due to being cleaner burning and ultralow carbon intensity on a life-cycle basis, the two companies are hoping to deploy such larger projects in markets within Canada and the U.S. that are governed by low carbon fuel standards (LCFS) and similar regulations.

Synthetic fuels produced with A2F have several intrinsic advantages to offer in decarbonizing the transportation sector, namely that they have an energy density 30-fold greater than today’s best batteries, can be produced with a land footprint 100-fold less than today’s biofuels and are “drop in” compatible with today’s engines and refueling stations. This drop-in compatibility allows progressive emissions reductions by gradual fuel switching without infrastructure turnover. There has been a surge of recent interest in air to fuels, and internal estimates suggest that fuel production costs will allow market entry into LCFSstyle systems at current prices.