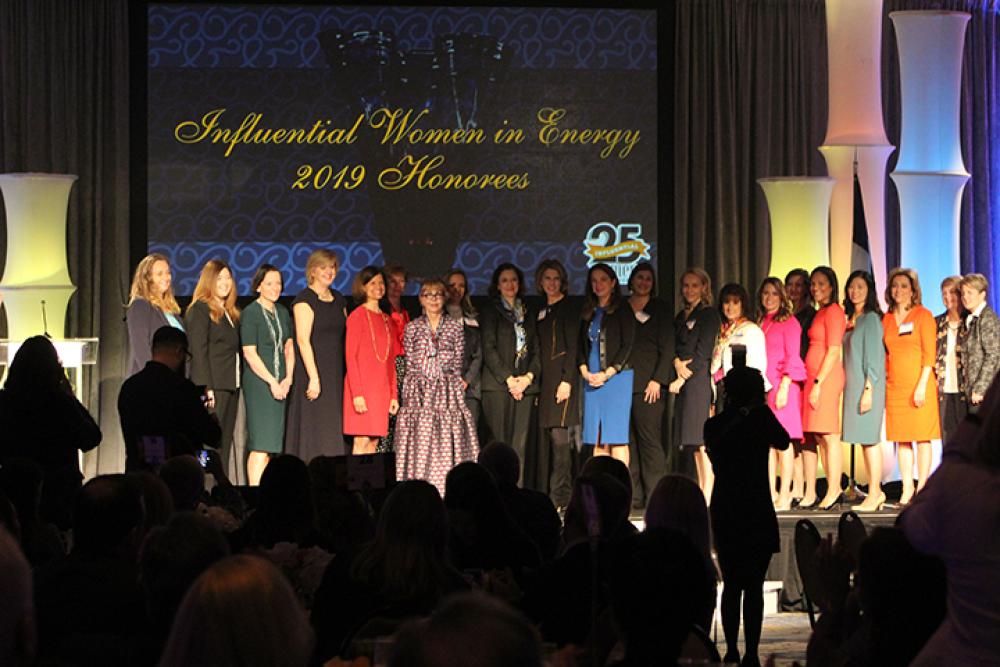 Honorees in Oil and Gas Investor's 25 Influential Women in Energy gather on stage during a luncheon at the Hilton Americas in Houston, Texas, on Feb. 12, 2019. (Source: Hart Energy)

Editor’s note: check back for feature stories from the 25 Influential Women in Energy event on this site. In addition, look for our special HART ENERGY CONNECT special “Women in Energy Week” featuring video interviews with many of this year’s honorees, beginning Feb. 25.

Schlumberger’s global director Paula Harris proclaimed the room “nothing short of amazing” as she took the podium and scanned the crowd, which was a virtual who’s who of oil and gas leaders. Harris presented the Pinnacle Award to M. Katherine Banks, vice chancellor of engineering and national laboratories at Texas A&M University. She also serves as dean of the College of Engineering.

Banks spent her time on stage discussing the need for STEM (Science, Technology, Engineering and Math) in the United States, particularly among women.

“The United States must prepare graduates for STEM fields of which energy, in all shapes and forms, will be one of our greatest challenges,” Banks said. She said, as the dean of one of the largest engineering schools in the nation, it was her responsibility to put into effect positive change.

Susan Helms, a former NASA astronaut and one of the pioneering women of the Space Shuttle program, took the audience on a breathtaking “journey” through a space shuttle mission—from take-off to landing. She’s done five of them in her career and once performed an eight-and-a-half hour spacewalk. She was stationed with the Expedition 2 crew on the International Space Station in 2001 and is the first woman graduate from a U.S. military academy to go into space.

The highlight of the afternoon was the presentation of the honorees, who represent all facets of the energy sector, from E&Ps to service companies to analysts.