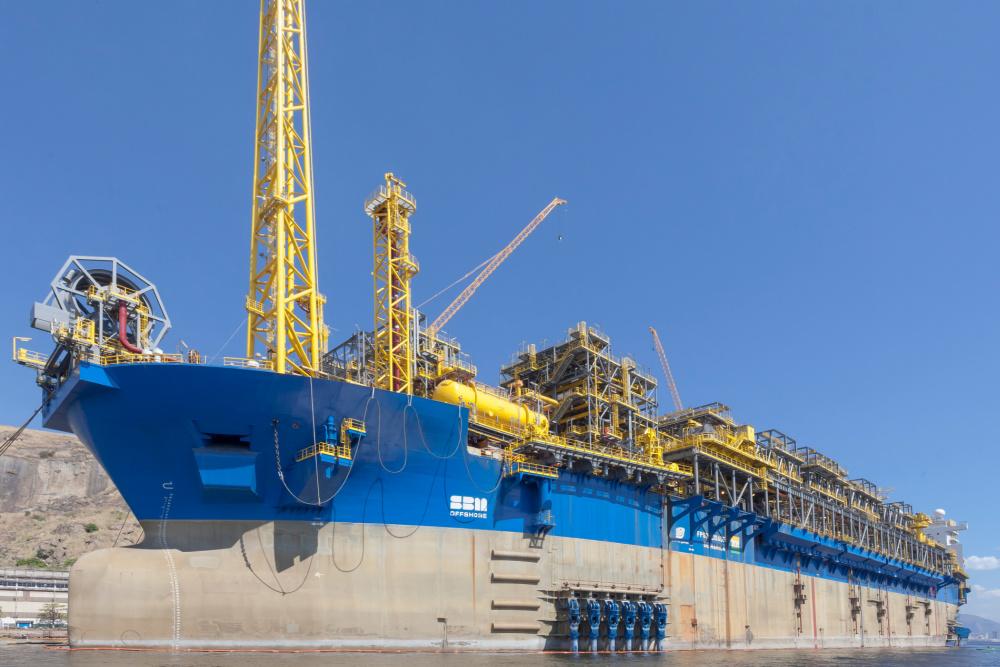 A file photo of the large oil and gas ocean FPSO vessel Cidade de Marica Nassau, one of Petrobras’ units, in the bay of Rio de Janeiro. (Source: Shutterstock.com)

Brazil’s oil giant Petrobras looks to start up five FPSO units in the next 13 months with combined capacity to add 630,000 bbl/d of production with the P-71 unit now slated to come online earlier than expected and by year’s end.

The rollout of the five FPSO units is part of Petrobras’ larger plan to incorporate 14 FPSOs between 2023-26 with combined production capacity of 2.25 million bbl/d, CFO Rodrigo Araujo Alves reiterated Nov. 3 during the company’s third-quarter earnings webcast.

The units will assist the state-owned oil and gas producer offset lost production due to natural field declines as well as other lost production associated with asset divestments as the company continues to fine-tune its strategy to focus on growing both reserves and production in the prolific pre-salt formation offshore.

Petrobras’ presalt focus entails divestment of non-strategic high-lifting cost assets as well as others related to refining, distribution, energy and natural gas across its portfolio. Financially, the focus will generate higher profits and allow the company to continue with a remuneration plan tied to its ability to keep gross debt below the $60 billion-$65 billion range.

Earlier this month Petrobras said it expected its production to average 2.6 MMboe/d in 2022, down slightly from its initial forecast. The company’s production averaged 2.64 MMboe/d in the third quarter with an average Brent price of $100.85/bbl during the three-month period.

Financially, Petrobras reported adjusted recurring EBITDA of $17.6 billion in the third quarter, the second highest in its history, while also reporting net income of $8.8 billion, free cash flow of $10.1 billion and controlled gross debt of $54.3 billion. The company’s average return on capital employed or ROCE was 15% during the quarter.

Rio de Janeiro-based Petrobras looks to roll out five FPSO units between now and the end of 2023 with one unit now expected to come online this month or next, company executives revealed during the webcast.

The P-71 FPSO at Itapu will have a 150,000 bbl/d capacity and is now expected online in 2022 and not in 2023. The unit reached the Itapu Field on Oct. 20 and the anchoring and connection stages are in progress. The unit is owned by Petrobras, which holds a 100% stake.

The Alm. Barroso FPSO at Buzios 5 will have a 150,000 bbl/d capacity. The unit arrived at the Brasfels Shipyard on Oct. 5 for commissioning and acceptance test stages. The unit is chartered by Petrobras, which holds a 92.66% stake, which will be adjusted downwards according to a deal announced in March awaiting approval by the Brazilian regulatory agencies.

The Anita Garibaldi FPSO at Marlim 1 will have an 80,000 bbl/d capacity (post-salt). The unit is sailing to Brazil for commissioning, inspection and acceptance test stages. The unit is chartered by Petrobras, which holds a 100% stake.

The Anna Nery FPSO at Marlim 2 will have a 70,000 bbl/d capacity (post-salt). The unit arrived at the Brasfels Shipyard on Oct. 1 for final commissioning and acceptance tests. The unit is chartered by Petrobras, which holds a 100% stake.

Lastly, the Sepetiba FPSO at Mero 2 will have a 180,000 bbl/d capacity. The unit is in the execution phase with its production system under construction. The unit is chartered by Petrobras, which holds a 38.63% stake.

Petrobras continues to expand its installed capacity in Buzios according to the Transfer of Rights Surplus plan, the company said. Buzios is the company’s most important asset and offers low lifting costs and low carbon emissions. Petrobras has a 92.66% stake in Buzios with Chinese partners CNOOC and CNPC.

Petrobras has already signed contracts for the construction of its ninth, tenth and eleventh Buzios units, the company said.