Estis Compression’s Wolf HPGL method uses no mechanical parts downhole. Instead, all equipment is topside and can be moved from well to well as needed. A scant five years after its first field trial, Estis is working to optimize Wolf HPGL through automation.

Victor Jordan, artificial lift specialist at Estis, said the artificial lift method is interesting to operators because it can accelerate production without some of the downsides that come with other artificial lift approaches, such as electrical submersible pumps (ESPs). 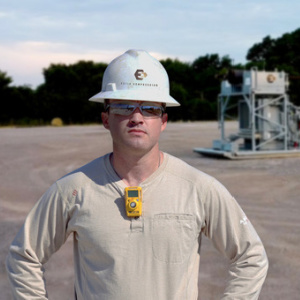 “Gas lift has gotten so much traction in the last five years.”—Victor Jordan, Estis Compression

ESPs are more prone to failure in sandy formations, he said. Due to being placed downhole, production must be shut in when ESPs are maintained or replaced.

Because deferring production reduces the value of an asset, Jordan said, “operators want to accelerate barrels as much as possible.”

Additionally, operators are seeking to increase their production as much as feasible and to sustain that output through artificial lift, he said.

Estis’ Wolf HPGL system injects compressed, natural gas down the entire production string, so the gas exits open-ended tubing at total depth. There, it combines with oil, water, and formation gas, reducing fluid column density and bottom hole pressure. The well fluids are lifted to the surface through the larger flow area of the annulus.

The system requires a feed compressor at the surface, which takes pressure from 80 psi to 1,200 psi, and a smaller booster compressor—Estis’ Wolf—that further increases the pressure of the natural gas from 1,200 psi to as much as 5,500 psi. That number is dictated by static bottomhole pressure.

“A lot of gas lift design has been around valve spacing, valve sizing, set depth,” Jordan said. “We have no mechanical parts downhole. We worry about injection depth, injection rate, cross-sectional flow area, flowing wellhead pressure. Those are the four variables we care about to maximize the value of assets.”

Because of the dynamic nature of unconventional well production profiles, Jordan said operators try to choose an artificial lift system that can handle drastic changes in the production stream.

The Wolf HPGL system has a much lower capex requirement than other forms of artificial lift, he said. One reason is because the system’s only downhole component is open-ended tubing. All the control happens at the surface, he said. Wolf HPGL is available as a rental.

“The need to have that high-pressure capability is not for the lifetime of the well. It can be from three to 18 months,” Jordan said.

When the bottomhole pressure has declined enough, the system can move to another well, he added.

In 2017, Estis and EOG Resources Inc. did a Wolf HPGL pilot project, and in 2018, Estis “started to invest a lot of capital in building a lot of (Wolf) units,” Jordan said.

2018 saw rapid growth of the Wolf HPGL system, and in 2019, Estis expanded into the Midcon.

In the back half of 2021, the company resumed building out Wolf units, he added. As of September, there had been over 1,600 applications of Wolf HPGL systems.

The next phase for Wolf HPGL—optimizing it—seeks to maintain or increase the base production levels, lower costs and maintain high efficiency, he said. That takes data gathering, data analytics and an algorithm to automate the system.

“We’re getting there,” Jordan said.

Uses of the system have resulted in increased production.

A 2019 deployment in the Permian Basin for SM Energy Co. demonstrated that “HPGL can match the output of ESPs,” he said.

The scope of the test involved eight of SM Energy’s wells on a single pad near Big Spring, Texas. Wolf HPGL was installed on one well, with the others serving as a control group featuring conventional ESPs. Daily production between 4,000 and 4,500 bbl/d of liquids based on comparative well data was anticipated.

The Wolf HPGL well had a vertical depth of 8,150 ft and smart separators featuring sensors. The system treated a lateral length of 10,000 ft. The production casing was 5 1/2 in. OD.

With the Wolf HPGL, SM had the ability to land the intake injection depth 600 ft lower than with ESPs, and it had the highest oil cut of any well on the pad, according to Estis.

The system has been used in all the main unconventional oil plays in North America.

“Gas lift has gotten so much traction in the last five years,” he said.