As the Gulf of Mexico enters the peak months of the Atlantic hurricane season, the National Oceanic and Atmospheric Administration (NOAA) announced on Aug. 4 it expects above-average activity levels.

It’s been a quiet season so far, with only three named tropical storms forming. In its mid-season update to the May forecast, NOAA slightly reduced the number of named storms it’s predicting for the hurricane season, which runs from June 1 to Nov. 30.

“The tropics have been relatively calm over the last month, but it only takes one storm to devastate a community,” Matthew Rosencrans, lead hurricane season outlook forecaster, NOAA’s Climate Prediction Center, said during a press briefing.

In the Gulf of Mexico, there are an average of 30-40 rigs conducting drilling or other operations, more than 1,600 actively producing platforms, and thousands of offshore workers in the Gulf at any time, according to the Bureau of Safety and Environmental Enforcement (BSEE).

Armed with that information, BSEE district offices will reach out to the rigs to confirm their evacuation preparations are adequate and appropriate based on imminent storm conditions and a storm’s projected path, O’Berry said.

BSEE is requiring operators to include, in their requests for permits to perform well operations in deep water, a reporting schedule in the event of hurricane/storm evacuations, he said.

Rosencrans said the peak months of the Atlantic season have arrived, and that’s historically when 90% of hurricane activity occurs.

In May, NOAA predicted 14 to 21 named storms, of which 6-10 could become hurricanes and three to five of those could become Category 3 or higher hurricanes. In the August update, NOAA dropped the predicted number of named storms to 14 to 20 while the rest of the forecast remained unchanged. The updated forecast takes into consideration Tropical Storms Alex, Bonnie and Colin, so that leaves an expected 11 to 17 named storms for the remainder of the season. 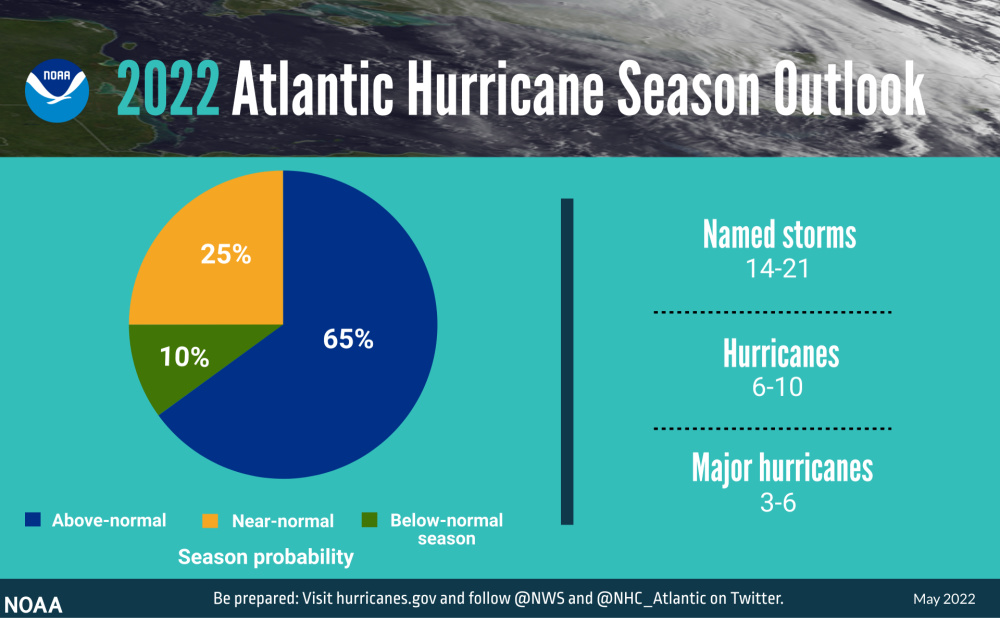 NOAA forecasters have slightly decreased the likelihood of an above-normal Atlantic hurricane season to 60%, lowered from the 65% chance in the May outlook. The likelihood of near-normal activity has risen to 30% and the chances remain at 10% for a below-normal season. NOAA said it provided these ranges with 70% confidence.

Sea surface temperatures are lower than expected, which is less conducive to storms forming.

“There have been some dynamic changes in Atlantic sea surface temperatures,” Rosencrans said.

Part of that is due to cooler waters coming into the region and dropping overall sea surface temperatures, he said.

Counterbalancing this is the ongoing La Niña effect, which NOAA believes will be in place for the duration of the year. La Niña can enhance tropical storm activity in the Atlantic, he said.

In addition to La Niña, weaker tropical Atlantic trade winds, an active west African Monsoon and likely above-normal Atlantic sea-surface temperatures set the stage for an active hurricane season and are reflective of the ongoing high-activity era for Atlantic hurricanes, according to NOAA.

“This is a general guide to overall seasonal activity and doesn't predict landfalling storms,” which are largely predictable about 1 week before reaching a coastline, he said.

And improving technology and satellite coverage also helps identify storms. For instance, because of good satellite coverage, NOAA is able to spot “shorties,” which gain tropical storm status and lose it within 48 hours, Rosencrans said.

“That contributes two named storms per year,” he said.

“We can identify more storms now than we could in the past,” Rosencrans said.