Seismic waves undergo various propagation effects as they travel through the subsurface, resulting in alterations in both the amplitude and the frequency content of the recorded seismic signal. Complex subsurface geology such as rugose salt bodies similar to the ones in the Gulf of Mexico or offshore West Africa and Brazil results in poor illumination of the underlying geology. This is because the salt bodies cause focusing and de-focusing of the seismic wavefield. Moreover, the illumination of the subsurface can be distorted by incomplete or inadequate acquisition geometries, resulting in uneven coverage of potential targets. Consequently, the reflectivity of subsurface formations cannot be reliably used to estimate their corresponding rock properties unless the distortions are removed from the migrated image.

Innovative acquisition configurations such as multiazimuth (MAZ), wide-azimuth (WAZ) and full-azimuth surveys have been successfully used to improve the image quality beneath complex geological structures. However, nonuniform illumination remains a challenge. 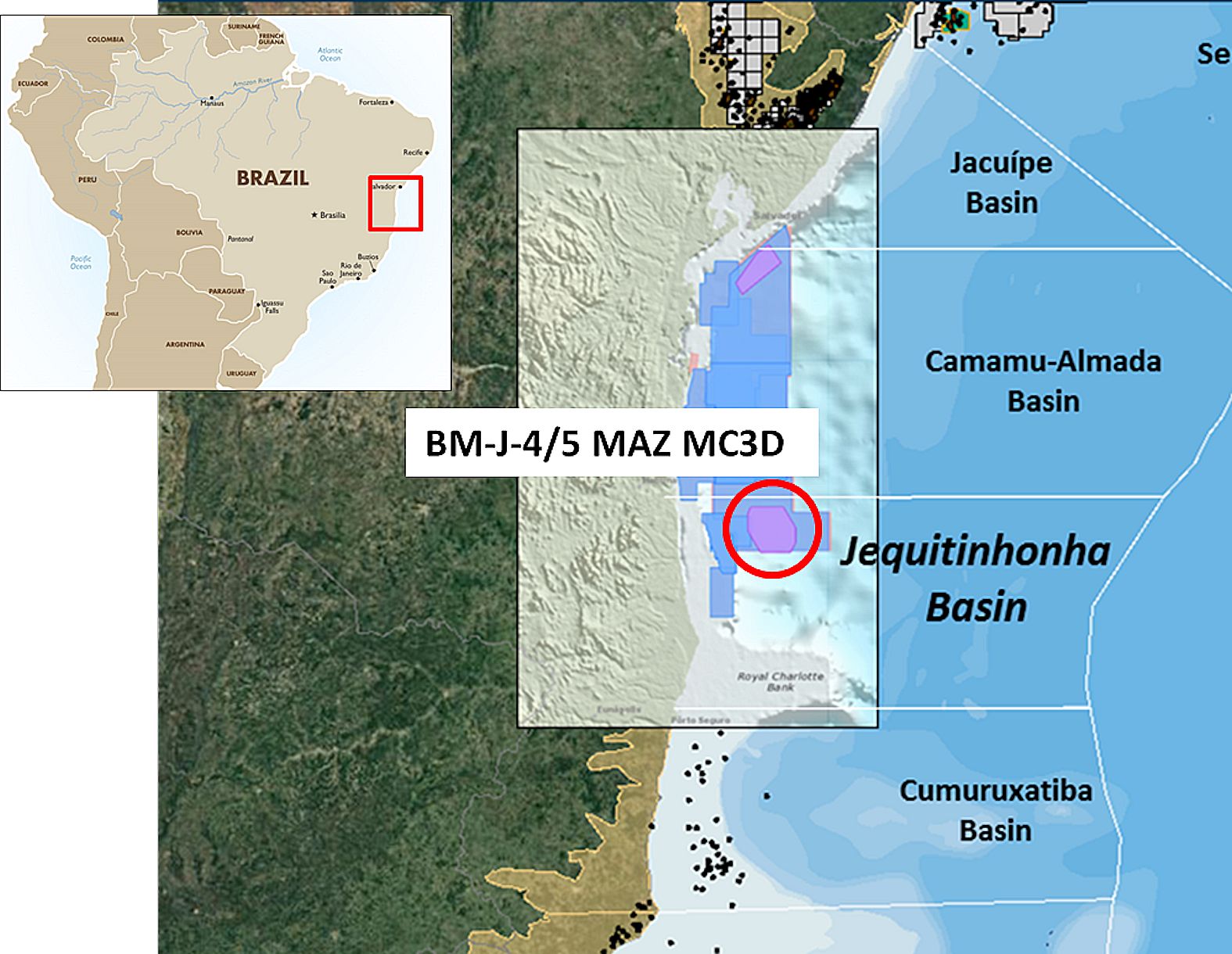 Hydrocarbon potential in the Jequitinhonha Basin

The Jequitinhonha Basin is a frontier offshore basin located off the northeastern coast of Brazil. Its origin and tectono-stratigraphic evolution relate to the rifting/drifting processes that led to the separation of South America and Africa during the Mesozoic Era. The presence of several lacustrine and marine source rock intervals, a confirmed active petroleum system and several potential reservoir units make the Jequitinhonha Basin a prime target for future hydrocarbon exploration offshore Brazil. The main potential reservoir units are post-salt Upper Cretaceous turbidites (passive margin), presalt Jurassic to Barremian continental sandstones (prerift and rift phase) and, potentially, presalt Aptian limestones (microbialites of the late rift and sag phase).

Similar to other Brazilian offshore basins to the south (e.g., Campos and Santos), thick evaporitic successions were deposited during the Late Aptian rifting/sag phases. Post-depositional salt deformation results in large and complex salt structures that affect seismic imaging of the underlying presalt succession. Furthermore, both the post-salt turbidites and the presalt siliciclastic and carbonate targets require reliable amplitude information to be extracted from the seismic data to ensure successful prospect identification and de-risking.

In February 2006 a traditional narrowazimuth 3-D exploration survey was acquired over blocks BM-J4 and 5 in an east/west direction using a spread of 10 hydrophone-only streamers. Processing and reprocessing of the data provided high-quality images typical of the geological setting and available imaging technology at that time. However, the deeper presalt targets that had been identified subsequent to the acquisition proved challenging to understand due to poor illumination and signal penetration.

In 2011 PGS overshot the original east/west survey with two additional passes of 3-D acquisition in the north/south and north-northwest/south-southeast direction to complement the subsurface illumination of the legacy image. Since the new surveys were acquired using broadband dual-sensor towed streamer technology, they resulted in seismic data that are much richer in both low- and high-frequency information. A series of processing steps including receiver-side deghosting and additional noise suppression were applied to the hydrophone-only legacy data to allow the combination of all three datasets into a single WAZ data volume. The new MAZ 3-D anisotropic depth migration resulted in significant improvements in image clarity and the continuity of, in particular, the presalt reservoir targets. Subsequent amplitude extractions along key target horizons, however, revealed remnant amplitude variations caused by the complex salt bodies. These variations required correction to enable reliable quantitative interpretation and rock property analysis.

To correct for the amplitude variations caused by focusing and de-focusing of the seismic wavefield, a WEI method has been developed that relies on the computation of so-called point spread functions (PSFs) as shown in Figure 2. PSFs are explicitly computed by the modeling and migration of discrete scatter points positioned throughout an earth model that is subsequently used for imaging. Where the subsurface is illuminated properly, PSFs are focused into a small area and are of high amplitude (see area marked 1). However, where local illumination is poor, PSFs are conversely poorly focused and stretched out, and their amplitude is weak (see area marked 2).

FIGURE 2. Synthetic data show illumination strength beneath a salt body (left). Blue colors represent low and red colors high illumination strength. A grid of scatter points representing the PSFs for the same salt velocity model is displayed on the right. The more the PSFs are focused into a small well localized area (1), the higher the local image resolution. At locations where the focusing of the PSFs is poor (2), image resolution also will be poor. (Source: PGS)

The local illumination information that is contained in the PSFs is used to correct the migrated image and recover the correct earth reflectivity. Using WEI not only corrects for illumination effects, but it also balances the wave number content of the depth-migrated image. This improves the representation of sharp contrast features such as fault boundaries (Figure 3).

WEI was applied to the BM-J4/5 MAZ prestack depth migration (PSDM) volume with the desire to improve the imaging of both post-salt and presalt reservoir targets. Figure 4 shows a crossline comparison of the anisotropic PSDM volume using the standard migration code and for WEI. The approximate location of the salt is marked in yellow to make it easier to differentiate between the post- and presalt regions. A clear increase in image clarity and resolution is observed in the post-salt section with an improvement in reflector continuity and sharper imaging of the faults. The image improvements in the presalt area are more subtle, but as predicted by the synthetic modeling, some of the fault boundaries are imaged more clearly (red arrows).

A more detailed analysis and quantitative interpretation of the new WEI volume is ongoing.

A more detailed analysis and quantitative interpretation of the new WEI volume is ongoing, but early indications are that in the shallower post-salt region a more detailed and higher resolution depth image will contribute to an improved geological interpretation. The impact in the presalt section is yet to be quantified, but it is expected that the new depth images will reduce interpretation uncertainty for the important lacustrine sandstone and microbialites reservoir targets.

FIGURE 4. In this comparison of a crossline anisotropic depth image from the 3-D MAZ BM-J-4/5 survey for a conventional migration (A) and WEI (B), significant improvement in image resolution can be seen above the salt body marked in yellow in the WEI image. In the presalt section, image improvements are more subtle; however, some of the fault boundaries have been imaged more clearly (red arrows). (Source: PGS)