Multilaterals often are cited as technology that can be implemented to maximize reservoir recovery rates and decrease field development costs. However, many operators are not willing to put multilaterals into practice. The most frequently cited reason for not considering multilaterals is risk. Without access to data to show otherwise, it is difficult to overcome this industry perception toward multilateral technology (MLT). This often leads to decisions not to run the technology being based on anecdotes of problem installations that occurred more than a decade ago, with technology and circumstances far removed from what would be seen today. This perception can prevent optimal decision-making when selecting field development strategies.

To move toward addressing this problem and to demonstrate the true reliability of the technology, Halliburton conducted a study to analyze the data from 22 years of actual multilateral well applications, which were obtained from the company’s internal records. More than 800 multilateral installations were evaluated to determine success and failure rates. The study showed that MLT reliability improved as the complexities of multilateral installations increased. Successful completions of multilateral junctions improved from more than 87% between 1995 and 1999 to more than 98% during the last five-year period as a result of continuous planning, the development of and adherence to procedures, management of change, communication, and technology development.

The results from this study will enable operators make fact-based decisions regarding the reliability of MLT so as to determine whether this technology should be considered for implementation into resource development plans. 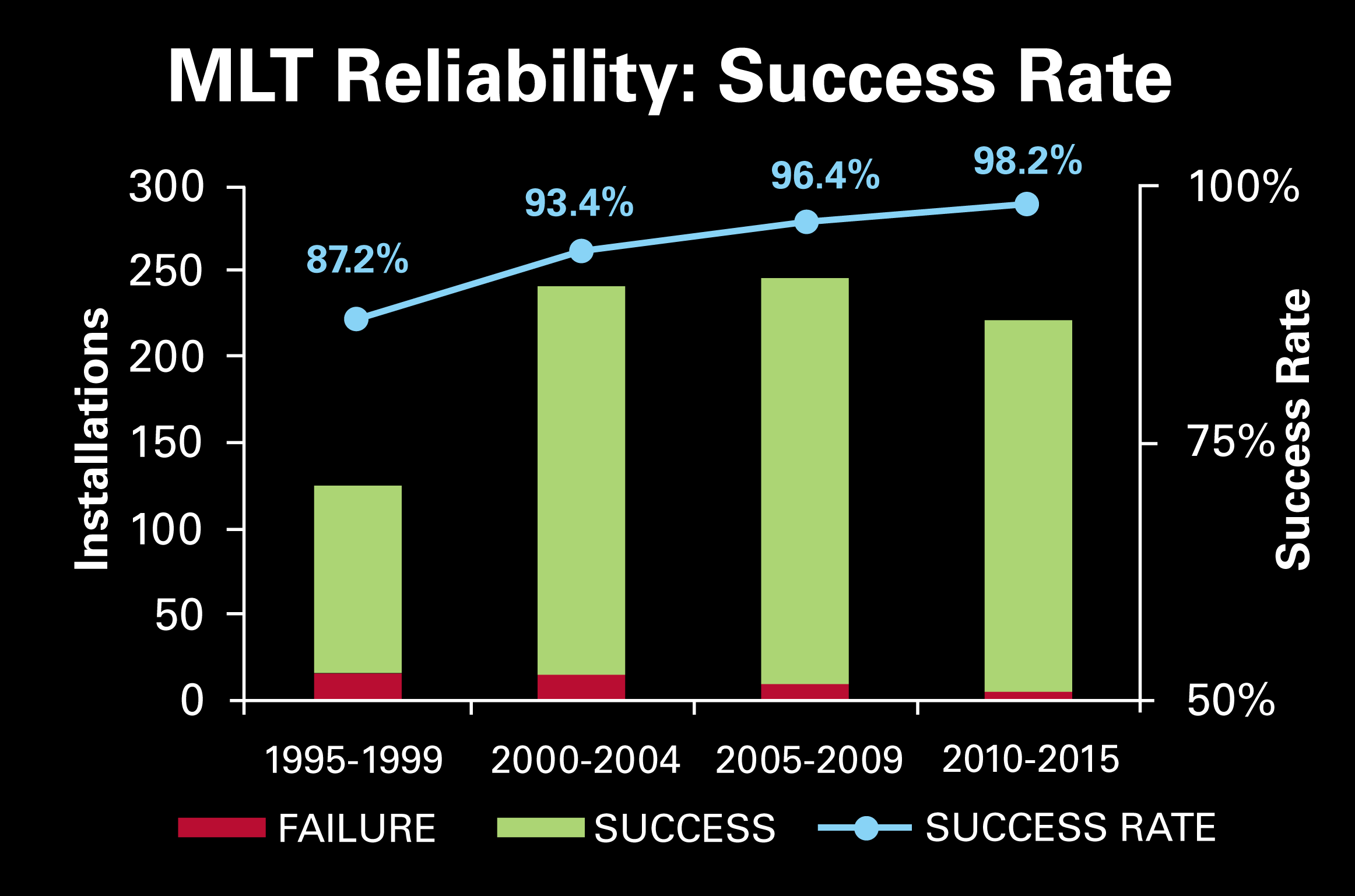 The dataset
Prior to conducting the study, all available end-of-well records pertaining to Halliburton’s multilateral operations worldwide were collected, totaling 951 junction installations in 778 individual wells in various geographic locations. After a rigorous audit of the acquired data, 33 critical datapoints were captured for each well. Each of the wells analyzed in this study was classified into one of the following categories:
• Success: completed in accordance with the design from an MLT operational standpoint;
• Partial success: completed with two or more producing laterals but not in accordance with the design (i.e., completed as TAML Level 2 rather than Level 5);
• Failure: the well, main bore or lateral could not be completed in accordance with the design, with either or both permanently lost;
• Not complete: MLT operations did not begin or were abandoned because of reasons unrelated to MLT operations; and
• Insufficient data: well outcome could not be determined owing to insufficient records.

It is worth noting that for the purpose of this study, the designation of success or failure does not pertain to a well’s ability to produce but rather denotes whether the multilateral junctions were successfully completed and installed in accordance with their intended design. Records with a status of “not complete” or “insufficient data,” comprising 14% of the total dataset, were omitted in this study. This left 822 junctions to be analyzed.

Overall MLT reliability
The results of this study revealed that of the 822 multilateral junctions (using 11 unique construction systems) completed over a 22-year period, 95% of the junctions were deemed successes, while 1% were considered partial successes, for a total success rate of 96%. Because this average spans a long time period, the data were grouped into five-year segments, which revealed that MLT reliability improved over time, demonstrating a 98.2% success rate for the most recent five-year period. With growing technology and improvements in procedure and personnel competency, the expectation is that MLT reliability will continue to improve. The data analyzed in this study showed an overall reliability trend toward 100%.

Reliability by MLT system
Of the 11 junction construction systems represented in the data, three continue to be the primary systems in use today, while more than half have been retired as technology has evolved. The three systems studied have a recent five-year reliability of 97.5%, 95.24% and 100%. The number of installations for each system over this period is 80, 21 and 114, respectively. It is important to note that these systems differ in regard to application, operational steps and equipment for installation and completion, which is, in part, why there is a variance in reliability. While system reliability is important to consider when deciding which system is best suited for a particular application, it must be reviewed along with the overall development strategy, reservoir characteristics, new or existing well, possibility for wellbore reentry, etc. Because each well is unique with its own specific design requirements and reservoir characteristics, not every MLT system will be suited for it.

Reliability vs. efficiency, well complexity
Reliability must be balanced with efficiency such that the benefits to MLT do not outweigh the costs. A perfect multilateral installation with zero NPT would be of no value to an operator if the number of additional runs and the cost to reduce risk to an acceptable level outweighed the savings gained from the multilateral. Similarly, increased well complexity such as lateral flow control and multiple laterals must be balanced against the cost and risk to implement it.

The study has shown, however, that significant gains can be made in operational efficiency and well complexity without sacrificing reliability. One of the three systems studied, which was first installed in 2001, required on average six days of direct multilateral construction time to install a single isolated junction, with commingled flow and no-flow lateral control. Most of these early wells were bilaterals and had a total reservoir exposure of about 3,000 m (9,843 ft). Over time, incremental improvements to technology and procedure have resulted in the gradual evolution of that system. Today, an average of 3.5 days construction time per junction is required, and control and monitoring of flow at each lateral is standard. Two-thirds of these wells are tri- and quadrilateral, with reservoir exposure per well averaging 10,000 m (32,808 ft). All of this advancement was achieved while still maintaining a reliability level of 99.6%.

Mature methodology
Since the drilling and completion of the first known multilateral well in 1953, multilateral technology has emerged into a mature, reliable well construction method. As with any new technology, MLT construction was subject to a learning curve with many lessons learned, which resulted in improvements in designs and methods and leading to the high reliability of the technology today. The current systems have overall reliabilities ranging from 95.7% to 99.6%, with a trend toward 100%. This increase was achieved as installation efficiencies and well complexity increased. In fact, some of the most complex applications (subsea and multiple junctions in the same wellbore) have the highest reliability rates.

Russian-led company expects to complete pipeline by the end of 2019.