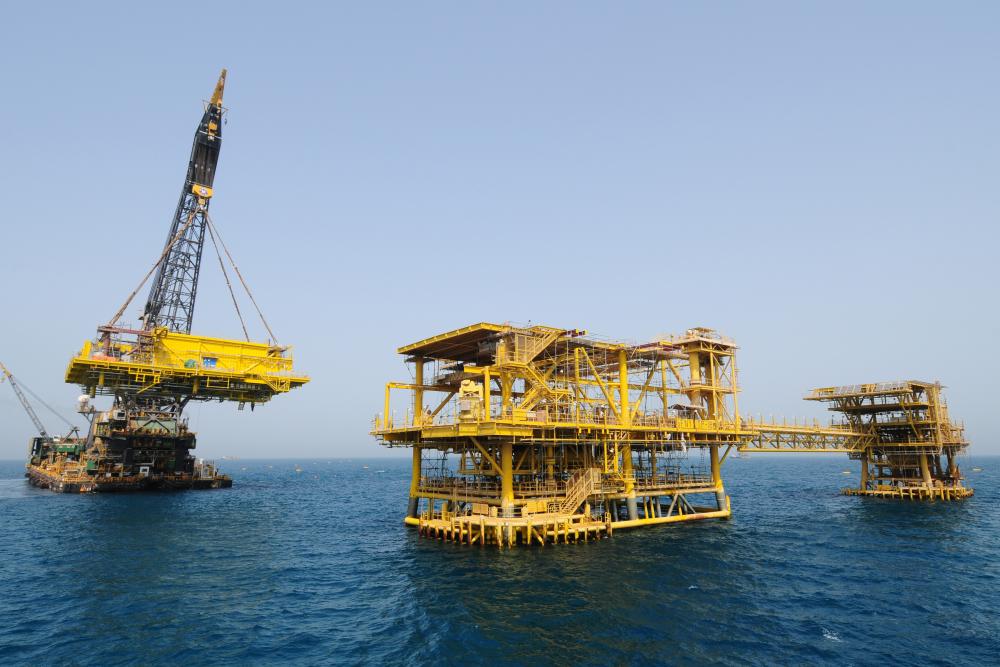 The TP-18 platform is located in the Marjan Field offshore Saudi Arabia. The EPCI contract was awarded to McDermott by Aramco earlier this year for the upgrade of two existing platforms. (Source: McDermott)

Although offshore production was hit hard as uncertainty loomed over the oil and gas industry over the past few years, 2019 appears to be a silver lining for the Middle Eastern offshore market. Rystad Energy experts forecast global offshore spending to outgrow spending on onshore shale this year, adding that 30% of the year’s offshore project value sits in the Middle East. According to Barclays Global 2019 E&P Spending Outlook, Middle East offshore spending is likely to increase by 8%, meaningfully outpacing 2018 levels.

“There are a number of major upcoming offshore upstream projects in the Middle East that will bring opportunities for the equipment and services sector,” said Will Scargill, senior oil and gas analyst at GlobalData. “Abu Dhabi is planning new projects such as the Ghasha sour gas development as well as expansions at its existing offshore oil producers. Saudi Arabia is also planning expansion at fields including Marjan, Berri and Zuluf, while Qatar will see offshore activity at its North Field expansion project.”

Significant activity was reported in the first half of the year, which began with a spate of foreign project agreements sanctioned in the region. With international service companies deploying world-class technologies to execute complex projects, activities offshore Saudi Arabia, UAE, Qatar, Egypt and Israel were reportedly most active in the world’s most prolific oil and gas region.

Saudi Arabia
In Saudi Arabia Aramco recorded a strong start to the year and awarded two offshore exploration engineering, procurement, construction and installation (EPCI) contracts worth $1.3 billion to Saipem in the offshore fields of Berri and Marjan. In an interview with E&P, Massimiliano Bellotti, Saipem offshore manager for the Persian Gulf and Arabian Sea, said, “During the next three years, we expect a marked increase of projects within the offshore EPCI market, which is 50% higher compared to last year.”

Aramco also awarded two EPCI contracts to McDermott for development of the offshore Marjan Field, in line with McDermott’s strategic focus to strengthen in-Kingdom content. “This award is testament to Aramco’s confidence in McDermott’s ability to execute this complex type of project,” said Linh Austin, McDermott’s senior vice president of the Middle East and North Africa, in a press release.

Continuing its wave of international project agreements, Aramco finalized a six-year offshore agreement with TechnipFMC, in consortium with Malaysia Marine and Heavy Engineering. This agreement covers engineering, procurement, fabrication, transportation and installation for the development of Aramco’s offshore projects.

In March Khalid Al-Falih, the minister of Energy, Industry and Mineral Resources of Saudi Arabia, announced the discovery of massive natural gas reserves in the Red Sea, with plans to intensify exploration work during the next two years.

UAE
UAE holds the world’s seventh largest proven oil reserves, with the vast majority in Abu Dhabi. In a first of its kind, Abu Dhabi National Oil Co. awarded Eni and PTT Exploration and Production two offshore exploration blocks as part of Abu Dhabi’s first competitive open block licensing round. The concessions cover a combined area of more than 8,000 sq km (3,089 sq miles) in the Emirate’s northwest area and both companies will invest $230 million for oil and gas exploration.

“Eni’s new licenses are part of a major growth strategy for the Middle East. It has significant development projects in Abu Dhabi, and the company is hoping that it will be able to quickly commercialize any discoveries made in its new exploration acreage to secure long-term growth,” GlobalData’s Scargill said.

Egypt
Following a spur of major offshore discoveries in the giant Zohr offshore gas field, which holds approximately 850 MMcm (30 Bcf) of gas, Egypt has been “witnessing keen interest of U.S. companies in its offshore exploration of oil and natural gas resources,” according to Petroleum Minister Tarek El Molla.

In February a supermajor consortium of Exxon Mobil, BP, Eni, Total, Shell and Petronas were awarded offshore exploration rights in the Mediterranean. In March Eni, in participation with Egyptian Natural Gas Holding Co., made a new gas discovery in the North Sinai Concession of the Eastern Egyptian Mediterranean. Eni is Egypt’s leading hydrocarbons producer by volume, producing more than 340,000 boe/d.

Israel
In March Mediterranean-focused oil and gas producer Energean announced commencement of its 2019 drilling program offshore Israel, which consists of three development wells and Karish North. Energean plans to batch drill the top-hole sections of the wells, which will allow significant operational efficiencies and cost savings. Karish North will target 36.8 Bcm (1.3 Tcf) of gas and 16 MMbbl of liquids.

Recording a milestone earlier this year, Trendsetter completed the design and build of subsea production equipment for Noble Energy’s Leviathan project, a large natural gas field development in the Eastern Mediterranean Sea off the coast of Israel. The Leviathan Field, which was discovered in 2010, holds about 623 MMcm (22 Bcf) of gross recoverable resources and is one of the largest natural gas discoveries in the world. It is being developed using a subsea system that will connect production wells to a fixed platform located offshore with tie-in onshore in the northern part of Israel.

Other countries
While Bahrain, Turkey and Lebanon invested in offshore exploration activities, countries such as Qatar, Iran and Kuwait focused on increasing production capacity.

In Bahrain Eni signed a memorandum of understanding for petroleum exploration in a largely unexplored block. According to Reuters, Bahrain also plans development of an offshore oil and gas discovery it disclosed last year with U.S. oil companies because of their experience with low-permeability reservoirs.

According to Bloomberg, QP’s four new liquefaction plants, known as “trains,” which are expected to be completed by 2025, will increase gas-rich Qatar’s LNG capacity from 77 million to 110 million tonnes per year.

In March Iranian President Hassan Rouhani formally inaugurated four new phases of South Pars, the world’s largest gas field in the Persian Gulf, which it shares with Qatar. Iran has invested $11 billion to complete the four phases, which will increase the country’s gas production capacity by up to 110 MMcm/d (3.89 Bcf), according to a statement issued by the Iranian Oil Ministry on Twitter.

Kuwait Oil Co. is using EOR techniques for Lower Fars heavy oil field development, a commercial project that aims to produce 270,000 bbl/d by 2030. The advanced recovery techniques are expected to achieve both higher recovery rates and a longer production plateau.