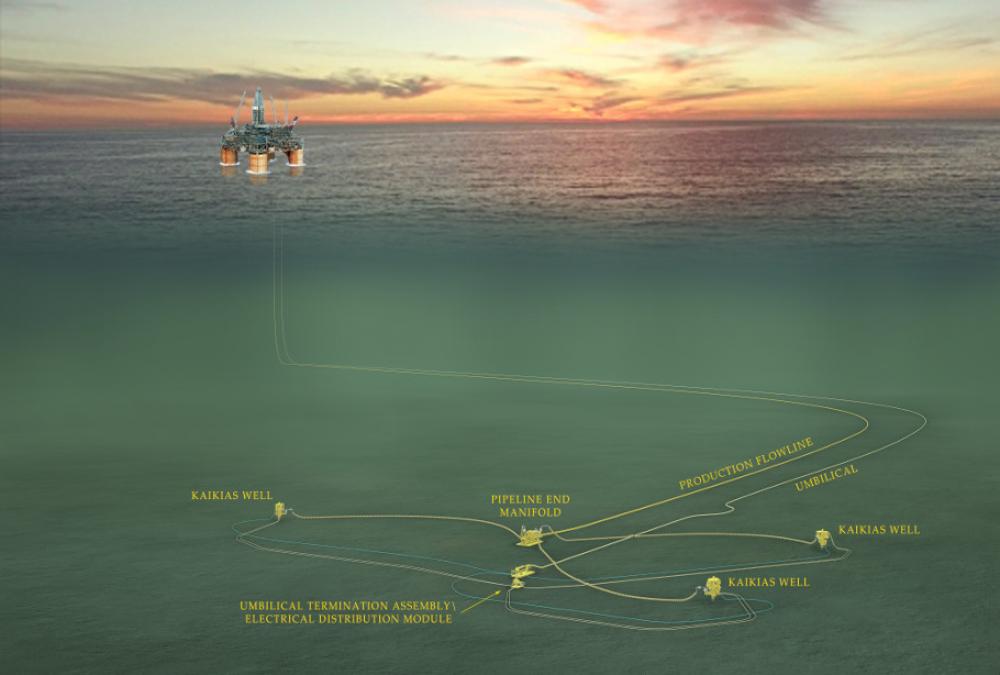 Shell’s Kaikias subsea development will tie back into its Ursa TLP. Production at Kaikias is expected to begin in 2019. (Source: Shell)

Much has been said about the efficiency gains onshore operators have achieved that make production increases in a sub-$50/bbl price environment feasible. Such trends also are evolving in the Gulf of Mexico (GoM), where companies are leveraging a variety of methods and technologies like subsea tiebacks and enhanced waterflood designs to exploit mature reservoirs in a time when developing large and costly platforms is an economic liability.

“We are seeing a trend of utilizing mature infrastructure in the Gulf of Mexico for a cost- and time-effective means of maintaining or increasing production from the GoM through subsea tiebacks,” said Kent McAllister, president of projects for Wood Group. “This is a relatively low-cost and short-cycle method of maintaining production for existing production facilities.”

One of the effects of those efficiency gains is increased spending on newly available offshore tracts. Based on lease sale numbers provided by the Bureau of Ocean Energy Management (BOEM), offshore operators’ appetite in new investments seems to be returning. According to BOEM, lease sale No. 249 in August brought in $121 million worth of bids for 90 tracts, and companies so far this year have spent more than $315 million pursuing offshore GoM tracts. That amount is up 76% compared to lease sales in 2016.

“There are a couple of different strategies that we’ve got with lease sales,” said Rick Tallant, asset manager for the GoM East operations at Shell. “We look at if there are more near-field exploration opportunities that are near our existing infrastructure. So we look at lease sales specifically at our key hub areas. And the key hub areas are the Mars corridor, Stones, Perdido and expanding our Norphlet play around Appomattox.”

In cases like Shell’s, oil companies are pursuing such tracts as bolt-ons to existing production facilities where they can implement subsea tieback systems, making new developments offshore the GoM more financially appealing.

One recent example came in February, when Shell announced a final investment decision on its Kaikias deepwater development, planned for a tieback into the nearby Ursa tension-leg platform (TLP), which has been in production since 1999.

Brown said that by simplifying the design of the project and using lessons learned from Shell’s previous subsea developments, total costs for the Kaikias project have been reduced by 50% and will find a breakeven price below $40/bbl.

“Based on some neat technology around seismic, we were able to see some subsalt that we hadn’t seen before, and we were able to see the Kaikias development,” Tallant said. “It made a lot of sense when you’re 5 miles or 6 miles [8 km or 10 km] away from the Ursa TLP that [Kaikias] would be a tieback into that facility.”

Kaikias offers more than 100 MMbbl of recoverable reserves but isn’t large enough to support its own standalone development, he added.

“So tying it back into a facility where you have production availability lowers cost and cycle time, and you can reduce your capital,” he said.

Shell has contracted with TechnipFMC to manufacture, install and integrate its proprietary subsea production and processing system and subsea umbilical, riser and flowline equipment. Those systems helped improve the overall competitiveness of the project and includes the first application of TechnipFMC’s compact pipeline end manifold and horizontal connection system. According to Shell, Kaikias is expected to start production in 2019.

Behrends said boosting systems such as the ones offered by OneSubsea have the capability to extend tieback distances, which currently average 24 km (15 miles) in the GoM, according to the Energy Information Administration (EIA).

“This is accomplished by adding energy from the pump to overcome increased frictional losses/flow assurance challenges and revitalizing mature fields by reducing wellhead pressures,” he said. 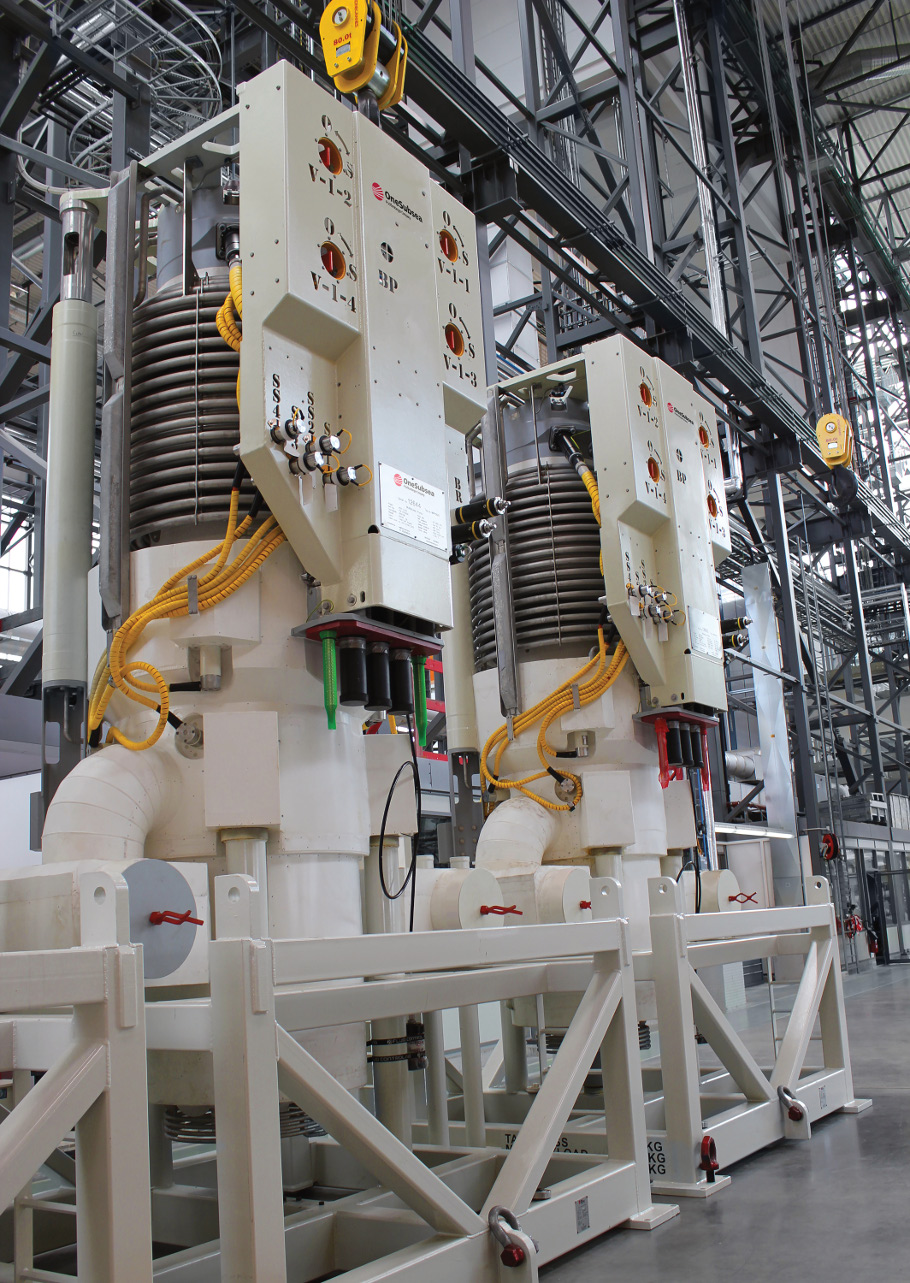 OneSubsea boosting pumps, available in single-phase, multiphase and hybrid, are based on a rotodynamic pumping principle using centrifugal and helico-axial technology. (Source: Schlumberger)

In September deepwater operator LLOG announced plans for several of its projects, all of which will implement tieback systems. Its Claiborne development in Mississippi Canyon (MC) 794 will begin producing in mid-2018 and tie back to the Coelacanth platform, operated by Walter Oil and Gas Corp. LLOG’s LaFemme and Blue Wing Olive developments in MC 427/471 will be tied back to LLOG’s Delta House facility. The Red Zinger development in MC 257 also will tie back into Delta House and begin production in second-half 2018, while its Crown & Anchor discovery in Viosca Knoll 959, 960, 1003 and 1004 will tie back to the Anadarko-operated Marlin facility, with first production expected in second-quarter 2018.

LLOG’s Buckskin project is an 8-km subsea tieback to the Anadarko-operated Lucius Spar, and LLOG estimates it contains nearly 5 Bbbl in place. According to LLOG, first production is expected in second-half 2019.

Although implementing waterflood treatments into a mature offshore field is nothing new, companies are looking at new ways to flood mature reservoirs and are also reevaluating mature fields to determine if there are more hydrocarbons to be exploited through waterfloods.

“In these more mature fields where we’ve naturally lost pressure as we’ve produced, pressure support and sweep is very important, and we’ve really made some game changers in the waterflood development at Mars and Ursa,” Tallant said.

Waterfloods have traditionally been a rock in Shell’s shoe, even though the company has utilized floods since 2005 at Mars and since 2007 at Ursa. But new approaches to waterflooding are producing improved results for Shell.

“We’ve struggled because we’ve drilled wells that were in depleted sands and very soft rock, and the injection designs that we had originally were not able to maintain longevity,” Tallant said.

In response, Shell redesigned its water injector wells to be horizontal, which allowed it to inject under much lower pressure at higher rates. The new wells exceeded expectations in terms of both injection rates and longevity. That practice was utilized at the Mars Field, where Shell has so far drilled three horizontal injectors capable of safely injecting 52,000 bbl/d of treated sea water, which Tallant calls a “game changer” for Shell.

In addition to advances in subsea systems and new approaches to waterflood schemes, enhanced seismic and digital technologies are bringing new life to old fields and enabling them to produce longer than perhaps initially was expected.

“We’ve seen this with every hub-class development so far in the GoM—that the big fields keep getting bigger,” said Donal Rajasingam, asset manager for Shell’s GoM West operations. “We need to design and conceptualize with flexibility in mind, recognizing the track record that these fields tend to grow as technology evolves.”

Such methodologies are leading to increased interest in offshore development. According to a Wood Mackenzie report, there were six newly sanctioned projects in the GoM between 2015 and the first half of this year, more than any other offshore location in the world, and the EIA reported that seven new offshore fields will come online between this year and next.

“Exploration is a long-term game,” Tallant said. “It’s not a short-term play based on the current price cycle. So you really have to balance that by using near-field exploration and subsea tiebacks into existing infrastructure that you can get online faster and more capitalefficient in a shorter cycle time and balance that with new frontier plays that have materiality that can actually be your new heartlands in the future.”