At a time when operators must justify every penny spent on researching, developing and commercializing pioneering new technologies, the culmination offshore Norway of a successful first year of operation for a seabed compression system shows that the industry’s faith in subsea boosting know-how has paid off.

Contractor Aker Solutions has been justifiably proud to wave the flag for the world’s first such system, the first-generation compression facility it supplied for Statoil’s Åsgard Field in the Norwegian Sea, which achieved its one-year operational milestone in September.

After coming online last year it was followed just a month later by the startup of a smaller wet gas compression system on the same operator’s Gullfaks South Field in the Norwegian North Sea, this time supplied by OneSubsea.

Many see the Gullfaks system as providing the multiphase compression model required for smaller fields, where simplicity and relatively low-boost pressure drive investment decisions. In field-life extension efforts on Gullfaks, Statoil worked with OneSubsea and other suppliers to qualify the helico-axial multiphase compressor technology.

Its scale also helps to make it pretty productive. The two 11.5-MW HOFIM gas motor-compressor units at Åsgard, in addition to the scrubber, pump and coolers, have a maximum capacity of 21 Mcm/d (741.6 Mcf/d) of gas. This has so far seen the Åsgard system boost gas production from the field’s Midgard and Mikkel reservoirs to the receiving Åsgard B platform by about 40% compared to before it began operations last year.

Overall it will add an estimated 306 MMboe of new volumes from the two reservoirs, a more-than-impressive real-world cash return on the overall investment.

The two projects “represent two different technologies for maintaining production when the reservoir pressure drops after a certain time,” according to Statoil. “Subsea compression has a stronger impact than conventional platform- based compression. It is furthermore an advantage that the platform avoids increased weight and the extra space needed on the platform for a compression module.”

Similarly, on the Gullfaks South Brent reservoir, the smaller system will increase recovery by an estimated 22 MMboe, Statoil said, and extends plateau production by about two years. Linked to the Gullfaks C platform, the gas is compressed in 135 m (443 ft) of water before being pumped to the facility.

Time, however, waits for no man, or so the saying goes. Now that the first-generation systems are up and running, the offshore market already is focusing on the next generation of systems. With the industry fully aware of the need to reduce costs and simplify systems, the next incarnations are likely to utilize proven technology and fewer parts.

The result is likely to be a system working out at about half the size, half the weight and at least half the cost in terms of investment and installation. This would have to be achieved by eliminating parts of the support structure and reducing the number of modules involved while not deploying any new technologies that might be deemed more risky.

A company that played a major part in Aker Solutions’ system on Åsgard, MAN Diesel & Turbo, said it expects to cut the size and weight of such subsea compression systems by at least 50%. Basil Zweifel, head of upstream oil and gas at MAN Diesel & Turbo, said in a press statement celebrating Åsgard’s one-year operational anniversary, “The next generation of subsea compression systems will be based on proven technology and contribute to major improvements in both the recovery rate and lifetime for a number of gas fields. Aker Solutions and MAN will provide reliable compression systems for use at small subsea fields as well as large deposits such as Åsgard.”

Aker’s CTO Hervé Valla added that the two companies were “taking this technology further to deliver slimmer and lower cost compression systems without compromising on effectiveness.”

The issue of simplification is a key one for the next generation of systems. According to GE Oil & Gas, which supplied a range of technologies for the recently concluded successful test of the subsea gas compression system planned for Shell’s Ormen Lange pilot project offshore Norway, the operator and its partners are gearing up for the technology’s next step by simplifying the total system.

The pilot project was undertaken by Shell and its partners Petoro, Statoil, Dong and Exxon Mobil starting back in 2011 at the Anglo-Dutch major’s test facility on Nyhamna in Norway, where Ormen Lange’s gas comes to shore. Alisdair McDonald, head of GE’s subsea power and processing business, told E&P’s sister publication Subsea Engineering News, “The drive in the industry is now to simplify the total subsea compression system, and making the compressor more robust and tolerant to liquids is a key part of this. GE is currently qualifying a liquid-tolerant compressor, which will be an important step in this direction.”

In terms of how much the system might cost and how applicable it would be for use on various projects around the world, McDonald said, “The cost will be very dependent on field size and requirements (number of compressors, step-outs, etc.). Subsea compression also might be economic for smaller developments given that the power system infrastructure around is beneficial and the reservoir properties are suitable.

“The main benefit of subsea compression systems is increased recovery. For many fields the challenge is that the wellstream does not have enough pressure to push through the pipeline, especially when reservoir pressure declines. The compressor basically helps the gas stream flow, allowing the well to produce more easily.”

McDonald added, “Subsea compression is definitely an important part of the subsea puzzle in the future, but it’s not for all fields. It will depend on the reservoir and on the infrastructure in the area. As the systems become less complex and the technology is adapted in the market, we will see more subsea compression developments in the future.”

Crucial to the Ormen Lange test program, GE added, were several of its technologies, including a 12.5-MW vertical Blue-C centrifugal compressor and subsea power supply, transmission and distribution system, which eliminated the need to generate more power on nearby offshore facilities. The compressor was driven by an electrical package provided by GE’s Power Conversion business that featured a high-speed motor and high-power drive.

Other GE technologies tested included IFOKUS electric actuators, which are anti-surge actuators developed for 80-kilonewtons fail open operation, and the NAXYS Acoustic Leak Detection System, which was used during the submerged pit testing to monitor for potential gas leakages as well as operation of rotating machinery and power modules.

In addition, the test featured the use of GE’s subsea switchgear, supplying power and protection to multiple loads from a single cable to shore; subsea uninterruptible power supply providing power and protection to all the compression station auxiliary loads, ensuring continuous supply of power during system disruptions; and the MECON dry-mate connector 145/700, which GE said enables power transmission at 145 kV for tiebacks of up to 120 km (74.5 miles). 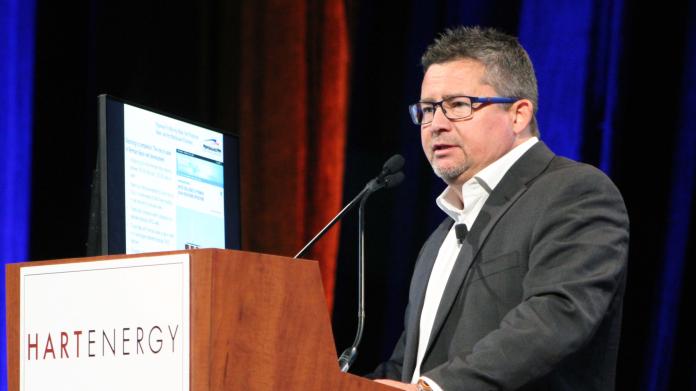 Solving The Predicament Of Water-Handling Pipelines

Times have been hard for the midstream, but exports promise a brighter future.