Silica sand is used extensively as a proppant in hydraulic fracturing operations because of its durability and readily available supply. On its way from the sand mine to the fracturing site, the sand proppant is handled by multiple workers who might be exposed to silica dust generated by the sand at each point of transfer across the hydraulic fracturing supply chain. Respirable crystalline silica is known to cause serious health issues. As a result, the U.S. Occupational Safety and Health Administration (OSHA) recently revised its silica rule, cutting the permissible exposure limit (PEL) for silica dust in half while implementing an action level (AL) that triggers additional monitoring requirements and mandates the use of engineering controls to minimize worker exposure. These requirements have spurred new R&D efforts aimed at innovating silica dust control technologies to more effectively protect workers.

One system that provides continuous silica dust protection without the requirement for capital-intensive investment by individual sand companies, transloads and hydraulic fracturing operators is chemical silica dust control proppant coatings such as ArrMaz’s SandTec. Once an effective proppant coating is properly and evenly applied to silica sand, the risk of worker exposure to silica dust is significantly and consistently reduced from the point of application to the point of end use.

However, not all silica dust control proppant coatings are alike. When evaluating proppant coatings, there are several criteria that must be considered. Initially, the coating must be compatible with the fracturing fluids being used and must not negatively impact the downhole performance of the well. Secondly, the individual characteristics of the silica sand being used as proppant must be studied to select the right coating and optimize the coating application rate to achieve effective silica dust control. The sand should be characteristically evaluated to understand its dusting tendencies by examining its shape, fines generation characteristics, surface area and composition. This second step, which often is overlooked, can significantly impact proppant coating performance, because not all sand is created equal and there is no universal coating that works with every sand type.

One consideration when evaluating the dusting tendencies of silica sand is its shape, which impacts the coating process and application rate. The shape of sand used as proppant can vary widely. While some sands are very spherical in shape, other sands may have a high degree of angularity. Historically, rounder sand has been preferred because of its better packing ability in a fracture. Above ground, it has been observed that rounder sand also has a higher attrition threshold as opposed to angular sand. As the sphericity of sand improves, the tendency of the sand to attrite and generate dust during transfer decreases. When attempting to decrease the attrition tendency of highly angular sand, coating formulation and application must be adjusted to optimize dust control performance. 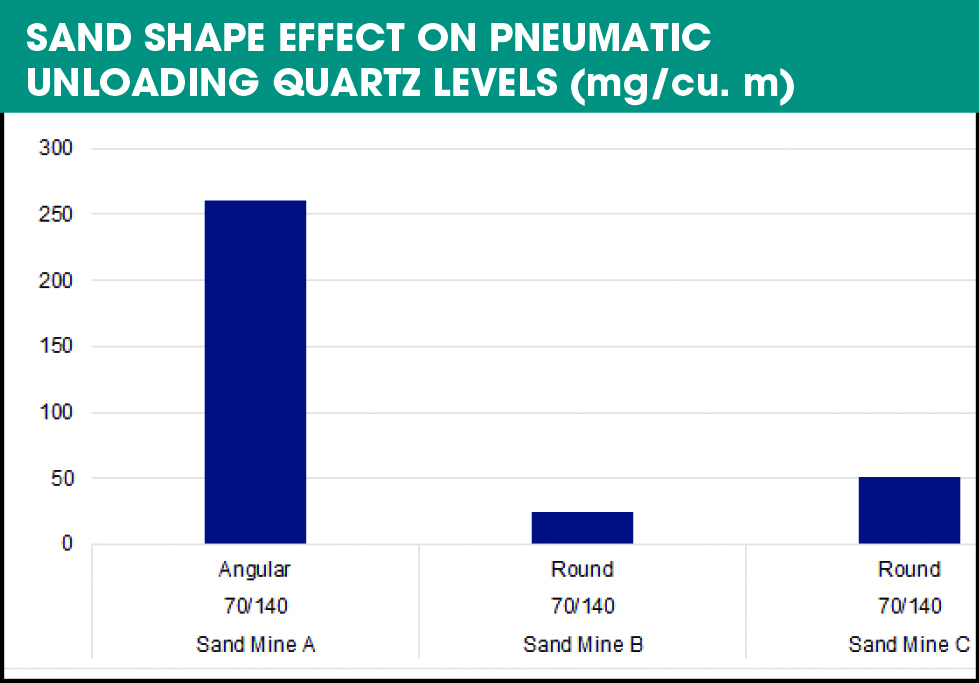 A pneumatic simulation was performed on 100 mesh sand with varying shapes from three different sand mines. The respirable quartz results were reported for each mine. Rounder proppant displayed lower levels of respirable quartz. (Source: ArrMaz)

In general, sand fines can potentially hinder well conductivity and also create dusting issues during handling, presenting significant dust control challenges. A simple sieve analysis can be used to help quantify the fines percentage of sands of varying shapes. Depending on the origin and the processing of the sand, sand fines can fluctuate anywhere from less than 0.1% to greater than 10%. Generally, a lower percentage of fines will require a lower coating application rate, and a higher percentage of fines will require a higher coating application rate to effectively reduce silica dust levels. 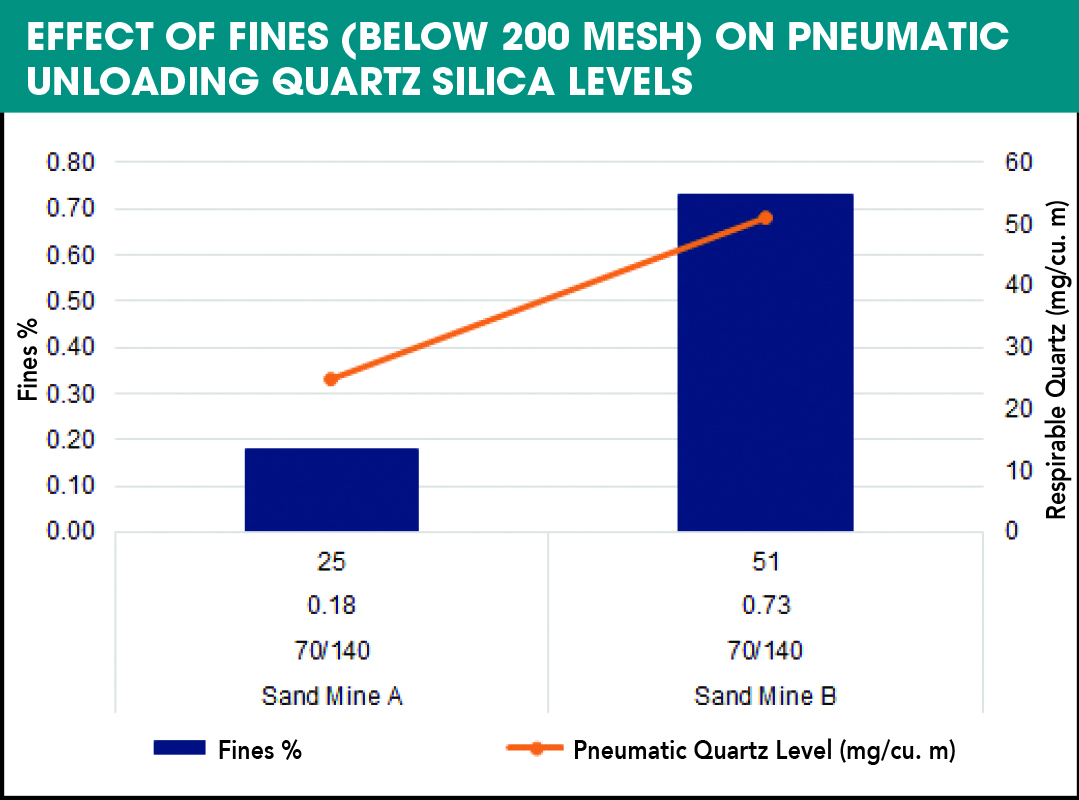 A pneumatic simulation was performed on 100 mesh sand from two different sand mines with varying amounts of fines. The fines and the corresponding respirable quartz are shown in the figure. A higher amount of fines was shown to increase respirable quartz upon pneumatic unloading. (Source: ArrMaz)

Sand surface area is another factor that must be considered, as it might be impacted by either the number of fines or the composition of the sand. To understand how surface area impacts the dust control effectiveness of a proppant coating, tests must be conducted to analyze the sand, the results of which will deliver valuable insight into the best proppant coating solution for the sand.

Although surface area can be reduced by mitigating fines, it is important to remember that surface area also is affected by sand composition.

Understanding sand composition is imperative when considering a proppant coating to calculate the correct coating application rate for effective silica dust control. Sand proppant composed of high-purity quartz silica is highly desired because of the durability it provides for the rigorous hydraulic fracturing process. However, sand mines use different mining and cleaning processes to achieve the highest quality of silica sand. Inevitably, different mines provide different qualities of sand, thus compositionally the sand that each mine provides may be different.

ArrMaz uses a defined testing platform to evaluate and set a specific coating application for each individual mine’s specific sand, which provides targeted dust reduction across the entire hydraulic fracturing supply chain with no negative impact on sand handling characteristics or downhole well performance. By understanding sand characteristics, ArrMaz is able to provide both an effective silica dust control proppant coating technology and application system tailored to each customer’s sand.

For the three months to Sept. 30, production slipped 10% to 6.81 million barrels of oil equivalent (MMboe)—its lowest September quarter output since 2014.