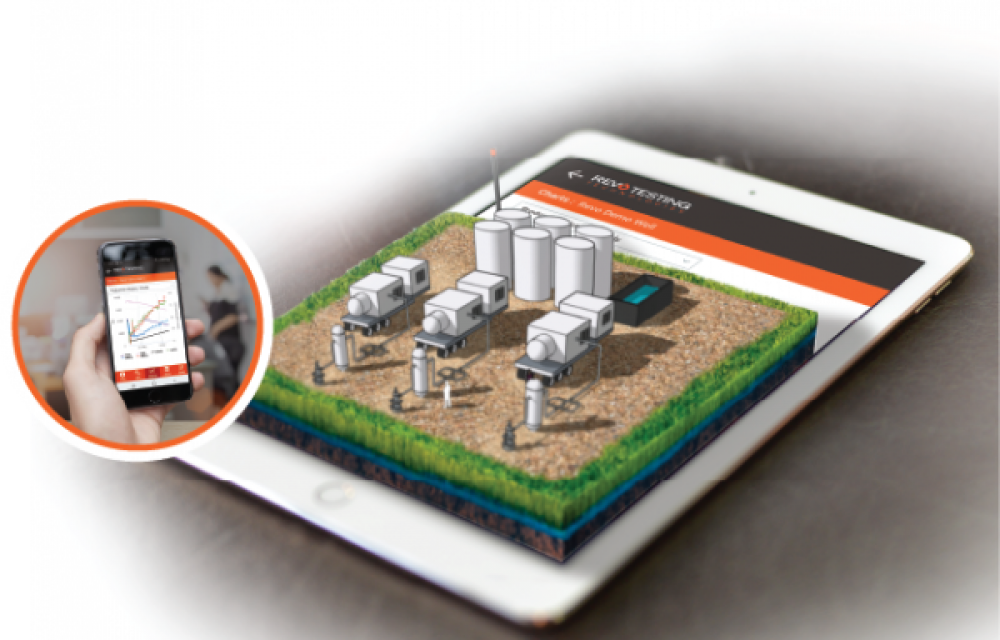 As unconventional oil and gas plays mature, there has been an increasing push to optimize production throughout a well’s life cycle.  This need has led to the development of numerous technology advancements in the tools and analysis the industry uses to drill, complete and produce wells. Revo Testing Technologies has been focused on developing automated well performance analysis technology and tools for both short- and long-term production. Existing solutions for monitoring reservoir and completion performance are time-consuming and are not suited for real-time operations.

As E&P firms look to streamline their operations, engineering teams are often asked to do more with less. For many engineers, there is not enough time in the day to perform a rate transient analysis on every well to track how reservoir performance is changing over time. Analysis of early production data may require licenses for two to three software packages with data juggling between them that can take hours to discern. During the critical IP phase of an unconventional well, it is vital to understand changes in reservoir performance to drive both the choke schedule and artificial lift plans.

Manually recorded data that are provided periodically to operators in emails or text messages is an archaic process, better suited to the oil field of the 1990s. The Revo iQ software was created to speed up the time-demanding process of monitoring and analyzing well data throughout each day. Revo iQ gives operators the ability to view a live stream of flowback, well test and production data from any source including Revo’s automated well testing system, any third-party field measurements or the operator's SCADA systems.

Revo iQ has now advanced even further to include the new APEX and RAPD rate transient analysis tools. These tools were created to help automate the analysis methods and workflow that Revo has developed to manage initial drawdown. If downhole gauge data are not available, Revo iQ will automatically calculate bottomhole pressure as data stream in. The RAPD tool will then perform an automated analysis to provide a real-time evaluation of how well performance is changing over time and from choke change to choke change. APEX will at the same time determine the peak well performance seen thus far and provide guidance on how current performance compares to the maximum. Using easy-to-understand visualizations of this analysis, operators can instantaneously understand how to manage their wells to preserve fracture conductivity while also ramping up production as quickly as possible.

In this example, Revo shows how automated rate transient analysis can assist during flowback. The plot below shows a well approximately 20 days into its initial flowback. On Aug. 15, the operator decided to start increasing chokes faster to increase production.

Unfortunately, as seen from the Apex analysis, the well’s performance decreased during these faster choke changes. Production was increasing, but at a cost of faster pressure drawdown when compared to the more stable period before choke increases were accelerated.

In the next case study, Revo shows the automated rate transient analysis results for a well on ESP. While the RAPD and APEX tools were originally developed for naturally flowing wells, Revo has now modified its analysis to work for wells on ESP.  When transitioning to ESP, users face the same challenge of controlling their drawdown to not damage the completion or reservoir.

All four metrics change to green as the choke and ESP are increased at the start of the test. However, measured rates for all three phases start declining causing the automated transient analysis to indicate a loss in performance compared to the previous trend (RAPD) and to the maximum performance seen (APEX).

In this case, the operator and Revo’s engineering team were able to identify and help correct rate measurement issues causing the apparent declining performance.  Subsequently, Revo was able to further open the well to achieve stable rates and saw performance for all phases trend back into the green.

Making decisions about how to manage the choke, artificial lift and drawdown in real time doesn’t need to be a time-consuming process. With automated rate transient analysis, engineering workflows that used to take hours can be done in seconds. Revo provides these new tools and technologies to allow operators to tailor a drawdown strategy for every well to optimize production and EUR.