Optimizing development costs has always been a mandate for oil and gas companies, but in today’s price environment operators are redoubling their efforts to maximize production and minimize costs on every completion. In the Wattenberg Field, where shale structure is complex and the stress regime is highly variable, Anadarko Petroleum Corp. recognized a great opportunity to employ microseismic technology to ensure highly profitable completions early in this cycle of field development.

Anadarko operates more than 5,500 wells in the Wattenberg Field and planned to drill nearly 400 horizontal wells in 2014 in the area. Anadarko’s emphasis on this field and impressive production statistics have led to a large year-over-year increase in sales volume in the Wattenberg. For Anadarko, applying technology to understand the reservoir is key to unlocking tremendous resource potential.

To aid in the development of new completions in the Wattenberg, Anadarko used microseismic monitoring technology to understand fracture complexity and enhance treatment effectiveness on three different pads. 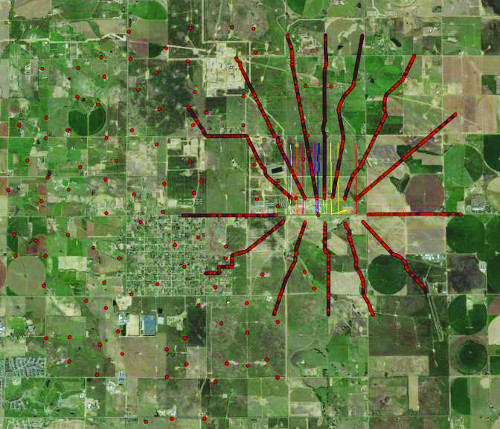 FIGURE 1. Design of the surface acquisition array used to collect microseismic data. The red dots represent each geophone that was placed along the arms of the array. (Source: MicroSeismic Inc.)

It’s all about spacing

One of Anadarko’s goals in using microseismic monitoring was to discover full field development parameters that would generate maximum production at an optimized cost. Important first decisions to be made in this optimization process are well and frack stage spacing. The project began by using microseismic monitoring during treatment of wells targeting the Niobrara and Codell formations, all drilled from two adjacent pads. The microseismic data were acquired using a surface array of geophones arranged in a radial pattern around the pad as seen in Figure 1. An analysis of these data allowed a mapping of fractures that opened during hydraulic fracturing and an estimate of which portions of the fracture network were propped.

The microseismic data indicate that the individual treatments on the Niobrara and Codell wells created fracture networks that overlapped each other by as much as 60%. Fractures commonly showed growth into overlapping vertical trends as seen in Figure 2. This understanding enabled better decisions on well landing to ensure a complete drainage of both formations without a wasteful level of overlap of drainage volume.

FIGURE 2. This heat map shows the vertical distribution of events in the Niobrara and Codell formations. The density of microseismic events is displayed in depth view, and the black dots represent the toe of each wellbore. As shown, the closely spaced center wells show overlapping growth (overlap in fractures). The further spaced wells in the east whos upward growth. (Source: MicroSeismic Inc.)

The results of the lateral spacing test showed significant overlap in the stimulated fracture network, indicating that both interwell and stage spacing could be increased to achieve optimal results and save costs. From comparing overlap in modeled unpropped vs. propped stimulated fracture networks, Anadarko estimated an optimal interwell spacing for this area in the 20% to 30% overlap range as indicated by Figure 3. This level of overlap is thus thought to reduce the volume of valuable hydrocarbons left behind. By using the same approach, a stage-by-stage spacing analysis was conducted to determine optimal stage length for this pad.

Why is overlap in the propped fracture network such a big deal? Too much overlap likely is wasteful of treatment dollars. Conversely, too little overlap is a good indication that portions of the rock were left untouched and reserves left behind. Drilling additional infill wells or refracking the existing ones to tap into those missed reserves is costly. Getting the spacing right early on in the development of a field increases the likelihood of maximizing production from the reservoir.

Herein lies the true value provided by microseismic monitoring in this instance: By monitoring multiple wells, Anadarko was able to approximate an ideal well spacing for this area of the Wattenberg Field at the time of completion. Typically, operators must wait for two years of production data to understand the effects of interwell and stage spacing before making adjustments to subsequent completions designs. 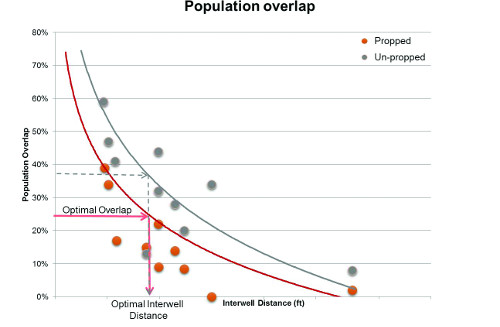 FIGURE 3. A plot of the propped fracture distribution with respect to wellbore center is shown. Analyzing these distributions from several wells has shown that propped fracture overlap of 20% to 30% between neighboring wells is desirable for optimal drainage from the interwell space. (Source: MicroSeismic Inc.)

The next phase of the project was to apply the lessons learned from the previous pad to microseismic monitoring of two subsequent pads with the goal of analyzing the completions and identifying stress changes resulting from different completion techniques. Each pad hosted wells targeting the Niobrara and Codell.

The wells on the first pad were fracked in a predetermined order with flexible completion parameters in an attempt to drive a pressure buildup southward through the center of the wells (Figure 4a). The idea behind this approach is that by maintaining a high pressure front, the rock will be more likely to fail with increased frack complexity, resulting in improved production. Wells on the second pad were zipper-fracked with conventional stage sequences and volumes.

The microseismic results for the Pad 1 treatment are illustrated in Figure 4a. The pressure wedge buildup in the northeast helped to create high-density microseismic event trends in a northwest-to-southeast direction with long lateral growth yet stayed within the target zone. In Figure 4b, the microseismic results for both pads are shown. The pressure wedge approach appears to have increased the density of fracturing for Pad 1, especially when compared to the northeast corner of Pad 2. 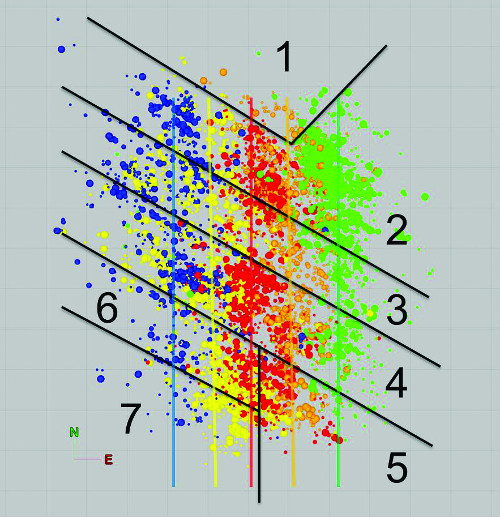 FIGURE 4A. The frack order of wells in the first pad is shown. (Source: MicroSeismic Inc.) 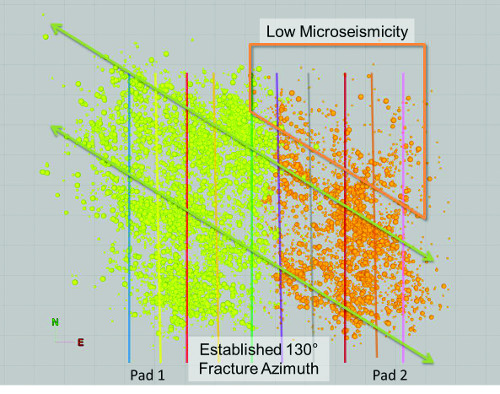 Real-time microseismic monitoring was used on Pad 1 to enable on-the-spot changes to treatment parameters. As seen in figure 5a, at the initial slurry volume a moderate amount of fracturing (as indicated by microseismic events) was detected. At the same time, it was determined that the fracture network was remaining within vertical coverage limits and that volumes could be increased while still staying in zone.

Based on this, the Anadarko team increased slurry volume and proppant on a modified stage sequence. As a result, Figure 5b illustrates a dramatic increase in apparent stimulated reservoir volume and fracture complexity, which demonstrates that real-time monitoring enabled the immediate change in treatment to improve the frack coverage area while remaining within the vertical target zone.

Anadarko has made what it judges to be a significant advance in its development plan for this important resource through the acquisition and analysis of microseismic data. The Wattenberg team has taken a large step toward arriving at an optimum well and stage spacing and shown that pressure shadowing can be used to control the created fracture network to a certain extent. It also has proven the value of real-time monitoring, which enabled completion changes when the frack results were falling short of the objective. Moving forward, Anadarko continues to monitor key projects to detect when reservoir conditions change and treatment parameters need to be tweaked accordingly to further optimize production and increase returns. 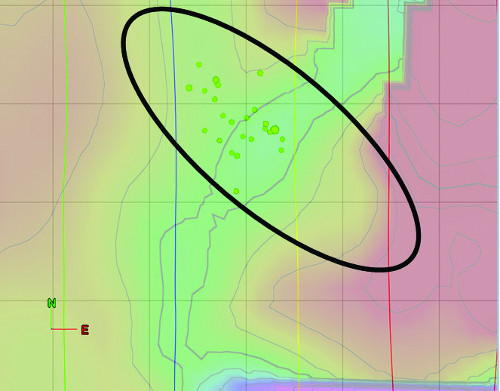 FIGURE 5A. Microseismicity of one stage that was monitored in real time shows moderate frack coverage. (Source: MicroSeismic Inc.) 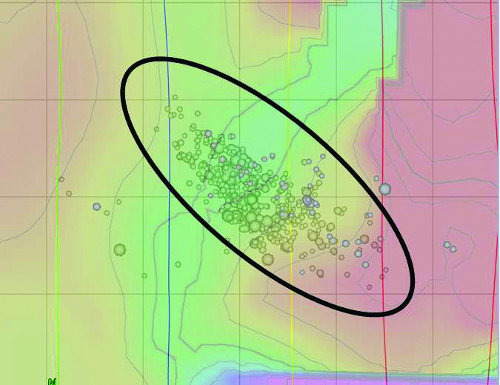 FIGURE 5B. Microseismicity of a subsequent stage fracked with higher volume shows an increase in frack coverage and complexity while remaining in zone. (Source: MicroSeismic Inc.)

Broadband seismic acquisition has been one of the leading emerging technologies of the last decade. By acquiring seismic information from a broader energy spectrum, this acquisition technique provides superior datasets for reservoir characterization.

In a CGG GeoSoftware lunch and learn at the Petex conference in London in November, given by Rebecca Goffey on behalf of author Menne Schakel, Goffey presented case studies illustrating the benefits of broadband seismic inversion. The enhanced low- and high-frequency content produces a sharper wavelet, leading to increased resolution with decreased sidelobes. It also may eliminate the need for a low-frequency model during acoustic/elastic inversions as well as improving signal penetration. These benefits also apply when using inverted broadband seismic data for structural interpretation and can enable fully data-driven reservoir characterization.

Schakel outlined two basic approaches for broadband seismic inversion. The first involves constructing a low-frequency model to fill the gap between 0 Hz and the lowest frequency described by a “conventional” wavelet, typically starting at around 5 Hz. The second is to estimate a long-period wavelet of up to about 500 ms that inverts down to the lowest frequencies that are present in the broadband seismic data. Only a very low frequency model (e.g., 0 Hz – 3 Hz) is used for the latter method.

Another case study involved a dataset in the Santos Basin offshore Brazil. This study incorporated a blind well in the study. Results indicated a better match with the well data using inverted broadband seismic than obtained from inverted conventional seismic in terms of compressional (P) impedance. A better defined oil-water contact led to improved volumetric estimation. Again the first approach was successfully applied.

The final study focused on broadband data from the U.K. Continental Shelf. In this study a 0-Hz to 2-Hz low-frequency model was constructed from seismic velocities, and no interpolated well log model was used. The lowest frequencies in the data were inverted, and Schakel noted that “fully data-driven reservoir characterization was achieved as evidenced from a porosity cube derived from the fully data-driven inverted broadband seismic.” This study used the second approach.

Australia-listed Oil Search Ltd. said it plans to launch a formal process for sale of its 15% stake in the Pikka project and other key Alaskan assets in first-quarter 2021.

With a giant gas project expansion in the tropical highlands of remote Papua New Guinea bogged down by politics, the country’s biggest company, Oil Search, is turning for growth to the other side of the world in Alaska’s frozen wilderness. 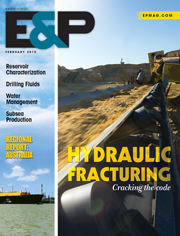