E&P operators around the world are looking for ways to reduce well construction costs while optimizing well placement and increasing production to maximize their overall asset value. In new developments the main obstacle to optimal well placement is uncertainty in the reservoir position and structure because of the inherent limitations of surface seismic data. In mature fields the reservoir position and size are generally well-known; however, significant uncertainty is associated with the position of the fluids within it because of movement caused by production or waterflooding. Such fluid movement is difficult to predict and leads to well placement challenges.

Conventional resistivity-based geosteering tools are sensitive to bed boundaries up to 5 m (18 ft) from the borehole. This range is sometimes insufficient to detect important structural features in time to make appropriate steering decisions. This can result in undesired exits from a reservoir target zone, the suboptimal positioning of the well in a target zone or the failure to hit a target zone altogether. By knowing the location of hydrocarbon pockets in the reservoir, being able to correlate the geological structure with surface seismic data, identifying bypassed pay and multiple reservoir layers, and seeing more of the reservoir and its surrounding area, operators can make better drilling decisions, plan for future field development and reduce costs per barrel of oil equivalent.

The Halliburton EarthStar ultradeep resistivity service addresses these challenges using electromagnetic (EM) wave-propagation technology to illuminate and map reservoir and fluid boundaries more than 60 m (200 ft) from the wellbore—twice the depth of investigation of current industry standards. It provides operators a much clearer view of the surrounding reservoir environment. In deep water and mature fields, this technology helps operators to maximize asset value and plan for future field development through geostopping, geosteering and geomapping.

Not just a tool

The EarthStar service is more than just a tool; it is a comprehensive service that includes proprietary RoxC geosteering software and highly trained geosteering experts. The service provides operators with reservoir insight before, during and after the drilling operation. The RoxC software provides two primary functions: to process the EarthStar data using a customized inversion process and to display the results graphically on a 2-D inversion plane. It also includes various quality control functions useful for interpreting the results.

The tool is flexible and configurable. It comprises several separate collar sections. A transmitter collar is always required, but it is possible to run the tool with one or more receivers at variable spacings from the transmitter. Figure 1 shows a typical configuration with a transmitter collar toward the lower end of the bottomhole assembly (BHA), typically immediately behind the rotary steerable tool, and two receiver collars separated from the transmitter by other intervening LWD tools or spacer collars.

The BHA configuration is not fixed and might be different from that shown. The tool’s modular construction allows adjustable spacings between the transmitter and receivers. Spacing adjustment is necessary to optimize the configuration for a particular application. If the objective is to detect boundaries far from the borehole (e.g., in a well-landing situation), then longer spacings are preferred because this provides a greater depth of investigation than shorter spacings. Conversely, if the target zone is relatively thin or if the detailed mapping of formation layers close to the wellbore is required, then shorter spacings are preferred.

Another differentiating feature of the EarthStar service is the tool’s very lownoise electronics. The transmitter emits an EM wave at one of seven possible frequencies: 1, 2, 4, 8, 16, 32 and 64 kHz. As with the choice of spacing, the firing frequency affects the depth of investigation of the measurement and the bed resolution of the tool. Low frequencies have the greatest depth of investigation, while higher frequencies are shallower reading but tend to reveal more detail in the surrounding structure. The emitted wave travels through the formations around the tool and interacts with boundaries between rock and fluid layers. The effect that a particular boundary has on the wave depends on the contrast in resistivity from one side of the boundary to the other.

Boundaries with high contrast will tend to reflect some of the wave energy back toward the tool, while those with no contrast will not. The wave amplitude diminishes as it moves away from the transmitter. The farther the wave travels through the formation, the more attenuated it becomes. The receivers must be able to detect and measure small signals that have been highly attenuated to be sensitive to boundaries far from the tool. The EarthStar service’s electronics are designed to be low noise, making the receivers highly sensitive, with a high signal-to-noise ratio. With appropriate spacing between the transmitter and receivers, the tool is capable of detecting boundaries up to 60 m from the wellbore in optimal conditions.

In a mature carbonate field in the North Sea, an operator deployed the EarthStar service to help identify remaining hydrocarbons bypassed by waterflood production. The operator drilled two wells that passed close to each other, with a vertical separation of about 40 m (130 ft). One well passed through the center of a distinctive, oil-bearing faultblock, about 43 m (140 ft) in height, with clearly defined boundaries that were easily identified from the inversion results provided by the RoxC geosteering software.

The second well passed approximately 18 m to 21 m (60 ft to 70 ft) above the top of the fault-block. The EarthStar service was able to geomap the top of the fault-block as well as the bottom some 60 m to 69 m (225 feet) away (Figure 2). In doing so, the service demonstrated its ability to map resistivity boundaries far from the wellbore, significantly helping the operator maximize asset value through enhanced reservoir understanding and setting a new industry benchmark for performance. 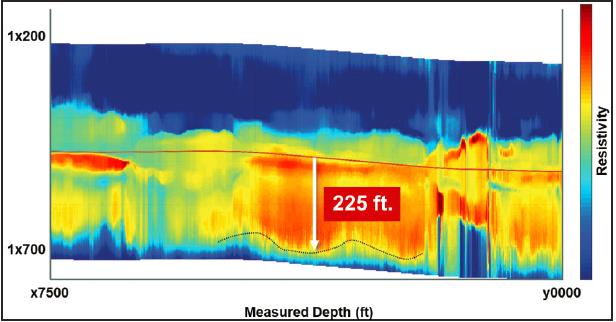 In another application, an operator in the North Sea was developing a new oil field but was having difficulty placing wells close to the top of the reservoir using conventional geosteering techniques. The problem was that the top of the reservoir was not flat, and the overlying shales were highly unstable. Drilling out of the reservoir into the shale resulted in poor borehole conditions and several instances of stuck pipe. As a result, the operator had to place wells deeper in the reservoir to reduce the risk of unintended exits. This placed the well too far from the reservoir top for the conventional geosteering tools to detect it reliably, making navigation more difficult. Moving wells away from the top also increased the volume of nonproducible attic oil.

The EarthStar service easily geomapped the top surface of the reservoir, allowing the operator to anticipate changes in dip and position the well with greater confidence. The net result was a series of five production laterals placed within 6 m (20 ft) of the top of the reservoir, with a total drilled interval of more than 11,000 m (36,000 ft), with no exits into the overlying shale. The EarthStar service helped the operator reduce time to develop the field while simultaneously increasing sweep efficiency and producible reserves.

Biden has pledged an "all-of-government" approach to fight global warming and decarbonize the U.S. electricity grid by 2035.