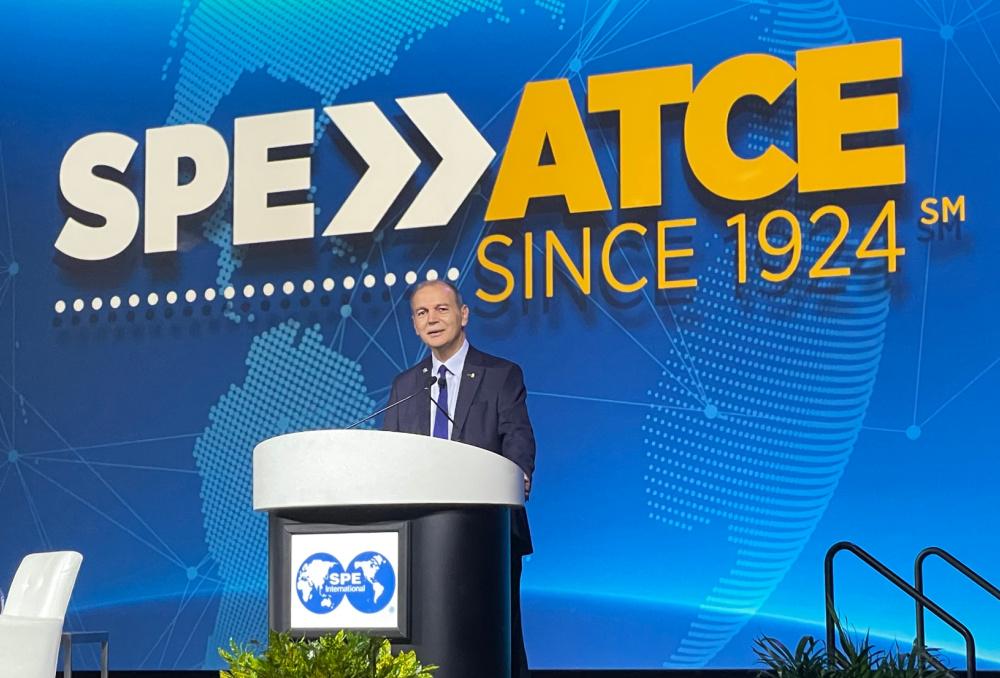 HOUSTON—The time has come for the oil and gas industry to “walk the talk” as the world works toward the energy transition.

The oil and gas industry faces a lot of challenges in the race toward net zero by 2050, but also a lot of opportunities, speakers said during a session on Sustainable Recovery—Transforming the Industry for the Future at SPE’s Annual Technical Conference and Exhibition (ATCE) on Oct. 3.

Lorenzo Simonelli, chair and CEO of Baker Hughes Co., said the industry must work to balance sustainability, affordability and energy security, or what has become known as the energy trilemma.

“We have the opportunity to drive change and solve the energy trilemma,” he said. “This is the time for our industry to be problem solvers, not part of the problem.”

Vicki Hollub, president and CEO of Occidental Petroleum Corp., said the discussion shouldn’t be around the fuel source and the “undirected, unbridled passion about killing fossil fuels” but rather around what to do about emissions and “how to collaborate and solve one of the world’s greatest problems today.”

She urged the industry to stay the course despite external pressures and comments from outside the industry.

“We’ve got to be better as an industry,” she said. “We are going to have naysayers until we are walking the talk and showing progress with transition. Until those things happen in a big way, we are not going to get support from a very big vocal group that’s attacking us.”

She said all companies need a strategy as the world moves toward the energy transition.

She said that doesn’t mean Oxy won’t produce oil and gas, but that she expects carbon management will be as big as Oxy’s chemical business in 12 to 15 years.

“I believe that companies that don’t have a carbon transition story don’t survive because that’s going to be our social license to operate,” Hollub said.

“Methane is what’s giving us the black eye in terms of society,” he said, urging the industry to “go after it” at scale.

Iman Hill, executive director at the International Association of Oil & Gas Producers (IOGP), said the industry needs to face up to the fact that change is coming.

As Kamel Ben-Naceur, president of Nomadia Energy Consulting and outgoing 2022 SPE president, noted, different parts of the world have different views on the energy transition. Some parts struggle with access to energy, while Europe is facing energy poverty, he said.

“We have never seen energy prices in Europe at the level they are today,” he said, noting the equivalent price of gas is roughly $600/bbl.

In the Middle East, Ben-Naceur said, Oman is formulating its strategy for 2071 and what happens when demand for oil is different than it is today.

But one thing is clear, he added: “We need to invest more in oil and gas.”

Barton Cahir, senior vice president for upstream portfolio development at ExxonMobil Upstream Co., said that “everybody recognizes the need for more oil and gas investment” through the energy transition.

“Upstream oil and gas is a big part of the mix into the future,” he said.

Increased production and emissions can exist simultaneously, he added.

“It’s not an either-or thing. It’s an and thing,” Cahir said.

For example, he said, Exxon Mobil has doubled its Permian Basin production in the last four years while reducing methane, flaring and total emissions.

“By the end of the decade, we will be at net zero for the Permian and grow production by a factor of two,” he said. “The and proposition is possible.”