Over the last few years, there has been an increase in the application of machine learning, a type of artificial intelligence, in the interpretation of seismic data.

This article specifically addresses the application of machine learning to seismic fault delineation.

A key process necessary in interpreting seismic data is defining the presence of faults and their areal distribution and network.  Faults are displacements in the sediment or rock column where the opposite walls have moved past each other. Faults are essential in understanding the geologic structure, reservoir seal integrity, field compartmentalization, migration flow paths and potential drilling hazards. Faults are usually recognized on seismic data as reflection discontinuities. Traditionally, faults on 3D seismic data have been manually picked by interpreters based on their experience and knowledge of the local geology. This is typically an extremely time-consuming process and highly subjective.

Beginning in the mid-1990s, seismic attributes that reveal seismic reflection continuities and discontinuities evolved with names such as semblance, coherency, curvature and variance.  These seismic attributes helped better define faults in the seismic data but were subject to stratigraphic variations and noise, and they still required manual picking by interpreters.

As computer power increased over the last two decades, machine learning has become a viable approach to interpret faults on 3D seismic data.

A supervised deep learning approach called convolutional neural networks (CNN) has evolved to provide excellent results in delineating faults. Since CNN is a supervised learning process, labels or examples of picked faults must be input to build the machine learning model. If interpreters are picking the fault labels for training, the issues of time and interpreter bias come into play again. In addition, it is difficult to know how many faults must be picked by the interpreter sufficient to produce a viable machine learning model.

There is a growing body of evidence (Wu et al., 2019; Qie et al., 2020) that an alternative method to generate training data can produce better and faster results. This involves the generation of training data with fully faulted 3D synthetic seismic amplitude volumes. Because the training data is synthetic, the exact fault solution is input into the machine learning model, eliminating interpreter subjectivity and producing a more accurate result. Since the synthetic model is 3D, there are no issues related to labeling faults on certain inlines or crosslines. The machine learning model is already established and built, so the application delineates faults quite quickly. The addition of pre- and post-conditioning of the data produces an enhanced CNN fault detection result.

Figure 2a displays a 3D seismic amplitude line where the faults have been predicted by a U-Net CNN architecture. Figure 2b displays the same line and associated faults in a RGB display, where the three colors depict different limited frequency bands in the data. Figure 2 shows clear fault delineations on amplitude and RGB data. However, there are still interpretation limitations when faults extend deep in the sediment column and stratigraphic variations are complicated and inconsistent. 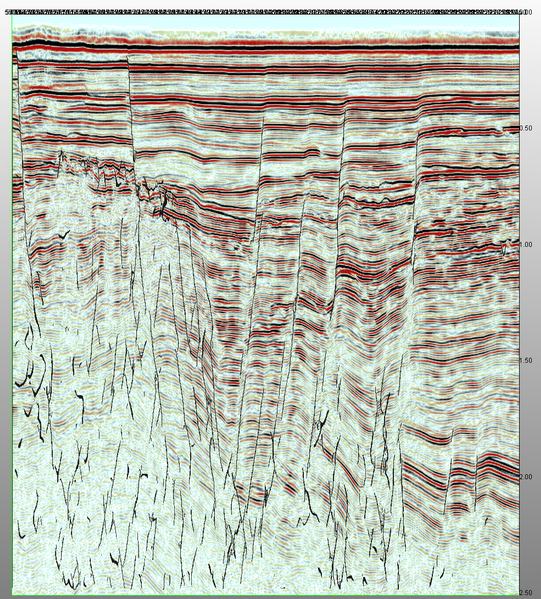 To improve the interpretation of the 3D CNN fault results, an unsupervised machine learning neural network methodology called self-organizing maps (SOM) is employed. SOM efficiently combines multiple seismic attributes to determine natural patterns and clusters in the data. These patterns or clusters can identify variations in the subsurface geology and stratigraphy (Roy et al., 2013; Zhao et al., 2015). These patterns are identified by neurons in a 2D color map. Therefore, combining in a SOM analysis the appropriate set of seismic attributes to define stratigraphy and the CNN fault probability volumes produces results where high-resolution stratigraphy and facies can be correlated with the fault lineaments.

SOM has proven to be quite successful in defining detailed stratigraphy and facies at higher resolution than conventional seismic amplitude data (Roden et al., 2017), so this process enables the isolation of faults in specific fault blocks and in some cases the interpretation of fault cuts in wellbores.

Figure 3a displays a 3D seismic line with extensive faulting from complex polygonal faulting relatively shallow, a middle section with larger and different trending offsets, and a deeper section where the fault trends are difficult to correlate on the amplitude data alone. Figure 3b displays the same line from the SOM analysis where eight instantaneous attributes used to define stratigraphy are run with the results from the CNN fault probability volume. 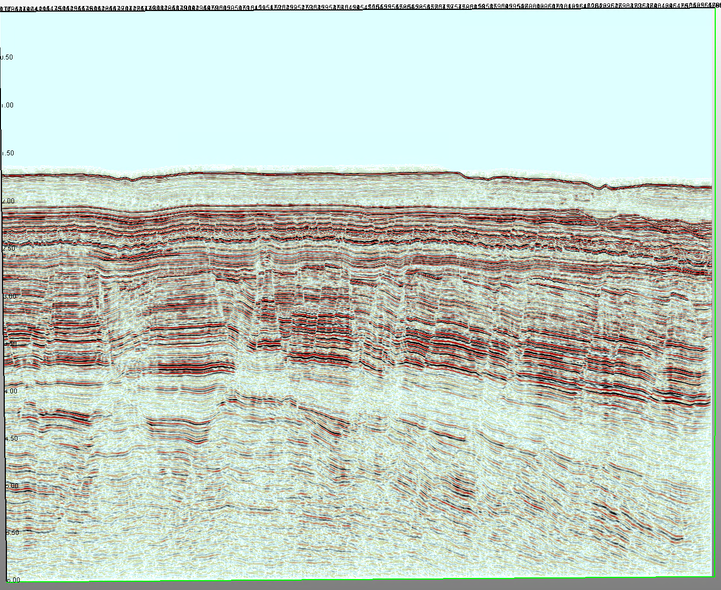 The 2D color map (Figure 4) displays 64 neurons, where each neuron represents a different pattern in the data. The faults identified by the CNN fault probability volume are associated with the four neurons in the bottom right and circled on the 2D color map.

It is evident in comparing these displays that not only is the stratigraphy more clearly defined, especially in the deeper parts of the section, but the fault correlations tied to the stratigraphy enables geoscientists to make a more accurate interpretation.

July 20, 2021 Reading Between the Lines of Subsurface Data

July 13, 2021 Exploration: Leveraging Digitalization to Maximize Results in the Field