In the week since our last edition of What’s Affecting Oil Prices, Brent and WTI have backed off recent highs. Brent fell $2.42/bbl last week to average $82.54/bbl. Also as we expected, $85/bbl remained the ceiling. WTI fell $2.18/bbl to average $72.95/bbl. While Brent finally fell below $80/bbl for the first time since the rally began, WTI has not yet touched pre-rally levels despite two weeks of large crude inventory builds. With another build likely to be reported on Oct. 17, WTI prices could fall more quickly in the back half of the week. Markets will likely remain resistant to bearish news, thus maintaining price support in the $80-$83/bbl band, but the most recent markets news means prices are likely to average closer to $80/bbl this week.

Russia and Saudi Arabia’s unilateral agreement to increase production is being heavily publicized by both governments as well as the U.S. in advance of Nov. 4. A third week of large U.S. crude builds would further weigh on prices. Additionally, the IEA’s latest report trimmed demand projections. After reports that the U.S. government was potentially considering issuing Significant Reduction Exemptions, there have been no further announcements. For now, concerns around the disappearance of a Saudi Arabian national appear to be limited to the political sphere, although the U.S. reaction to the disappearance bears watching on the off-chance that punitive measures are taken. 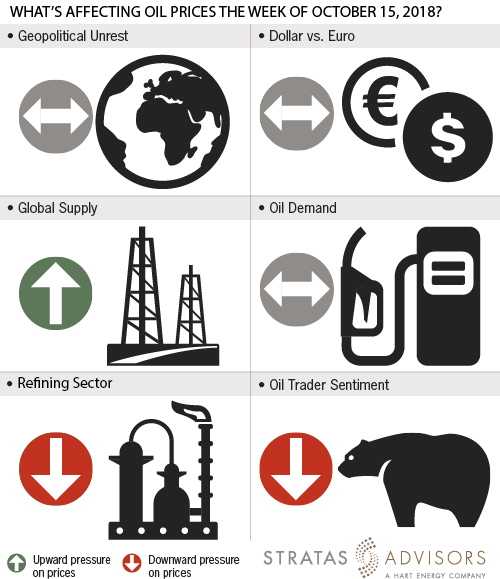