While the pace of declines has slowed OPEC is clearly worried, and was out early on Nov. 12 attempting to talk up the market. The Ministerial Monitoring Committee has announced growing concern with the pace of supply growth in light of potential demand weakness next year. Saudi Arabia’s oil minister has explicitly called for a material reduction in imports. Given that a month ago, OPEC was broadcasting its ability to easily replace lost Iran volumes, we remain skeptical that now a significant production cut will be materializing. We will be exploring fluctuations in OPEC messaging against actual volumes in a report for subscribers this week.

While OPEC might succeed in stemming the slide in prices, we do not see current rhetoric as enough to inspire gains. Additionally, trading activity will likely be slow this week and next in light of the Veterans Day and Thanksgiving holidays in the U.S. Thus we maintain a relatively conservative price outlook for this week. 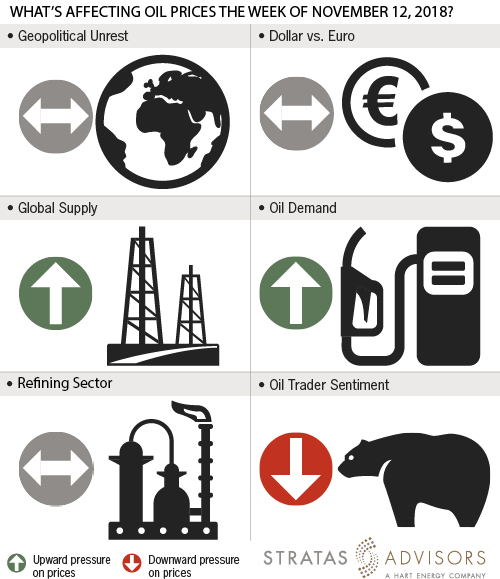